For the student housing sector, there finally appears to be a light at the end of the tunnel. The year 2020 was largely a year to be forgotten for the sector due to the ongoing difficulties as a result of the global pandemic. Mass vaccinations across the country have helped get the virus under control, and most colleges and universities around the country are planning for in-person learning for the upcoming fall semester. According to The Chronicle of Higher Education, as of June 14, 2021, 506 schools have made vaccinations mandatory for students for the fall 2021 school year.

Even though the fall 2020 school year was not as disastrous as many student housing investors and developers anticipated, they are eager for a return to the pre-COVID days. Early trends on student housing fundamentals for spring 2021 will likely please student housing property owners as rent growth, occupancies, and pre-lease numbers continue to improve. The wild card for upcoming demand in the student housing sector is that there is a bit of pent-up demand as enrollments were down in the fall 2020 semester, and many universities have made it easier to apply to schools as test scores have been waived.

Vaccinations and the Return to Normalcy

For the student housing sector, they could not have come soon enough. Since COVID’s widespread arrival beginning in March 2020, which also coincided with spring break at many colleges and universities nationwide, student life was severely altered. Many colleges and universities around the country have pivoted to distance/remote learning for the third consecutive semester (as of spring 2021). However, fall 2021 appears to be the first (full) semester in which schools can anticipate students being back on campus full-time.

According to The Chronicle of Higher Education, 506 colleges have announced that all students (and in some instances employees) will be required to receive full inoculation from COVID-19 in order to return to campus for the upcoming fall 2021 semester. The Chronicle of Higher Education has been tracking college announcements regarding vaccinations since March 25, 2021, and as vaccination rates rise nationwide due to increased vaccine availability, more schools are announcing plans for the upcoming semester. Inoculating the student population should help prevent outbreaks from happening at both schools and in the local communities. We believe it will also lead to more students returning to both on-campus and off-campus housing as it will be easier to justify the costs of room and board coupled with in-person learning resuming.

Occupancy levels were substantially impacted during the fall 2020 semester. Student housing data from RealPage, Inc., shows that occupancy levels were approximately 86.6 percent during the fall 2020 semester. This is a 4.5 percentage point year-over-year decline compared with fall 2019, when occupancy rates were at an estimated 91.1 percent.". However, early pre-lease data as of April 2021 shows that pre-lease occupancies have increased by over 10 percentage points – the biggest month-to-month increase in over three years. 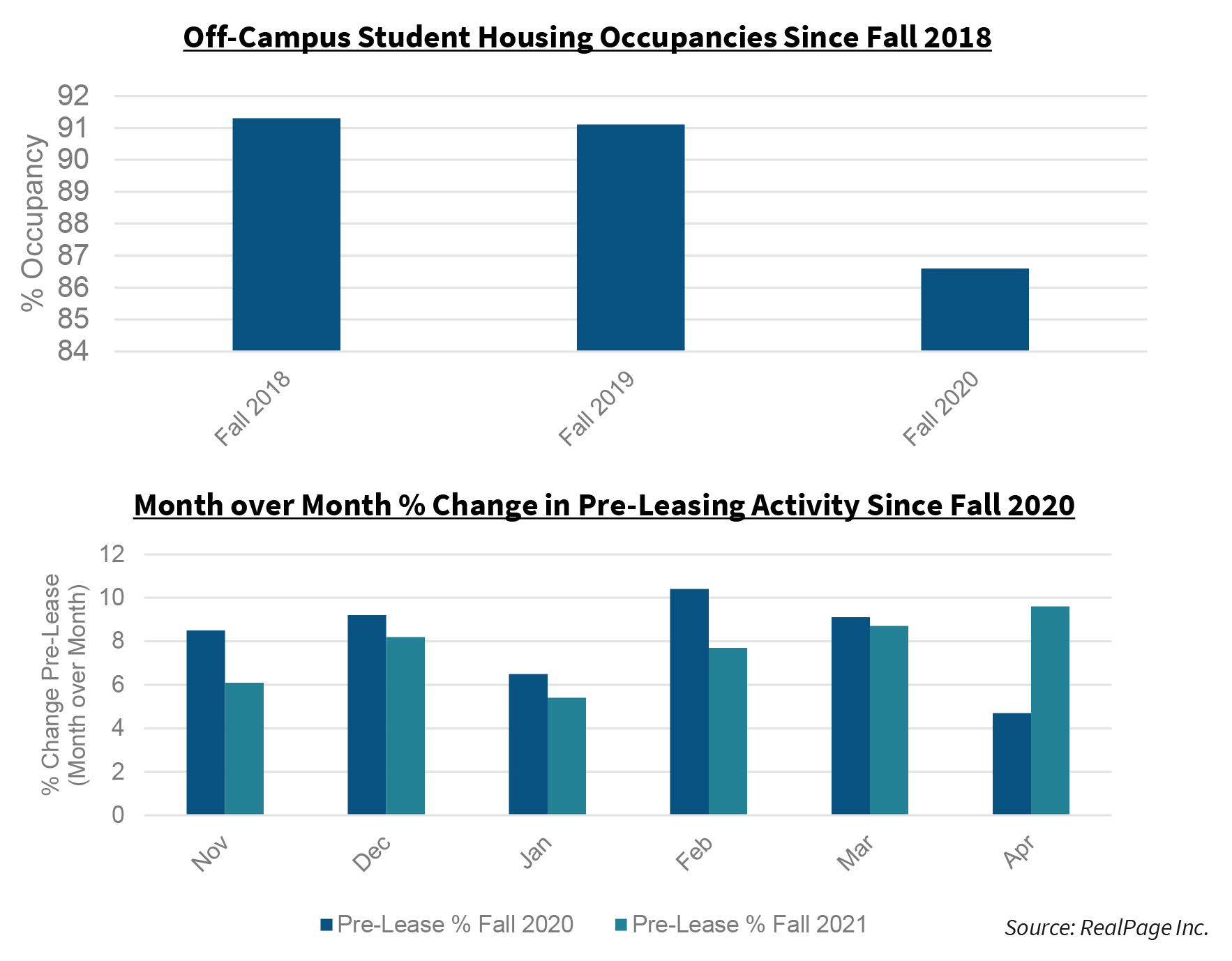 In a typical year, new deliveries are at the forefront of the student housing sector. Each new school year allows for a holistic view of how many new beds are delivered and where they are located. However, the arrival of COVID brought many fears that supply would slow for a myriad of reasons, including supply chain disruptions, labor shortages, enhanced safety/social distancing measures, and non-essential business designations. Fortunately, none of those factors were as damaging as was initially feared. For the fall 2021 school year, there will be approximately 42,000 new beds delivered across the country. According to data from RealPage and an analysis from Walker and Dunlop’s 2020 Annual Review, much of the new supply for the fall 2021 school year will be delivered to the nation’s southern schools.

Just like nearly every other multifamily asset class, student housing transaction activity also took a dip in 2020. Activity was mostly stable in the first quarter of 2020, which was mostly pre-COVID, however the second and third quarters of 2020 was when the virus impacted investment activity.

According to Walker and Dunlop’s 2020 Year End Annual Review, there were approximately 34 student housing transactions in first quarter 2020 totaling $1.9 billion. Once the pandemic was firmly in place during the second and third quarters of 2020, there were only 15 transactions combined, totaling just $550 million. Activity improved in fourth quarter 2020, increasing to 26 transactions totaling nearly $2.4 billion. 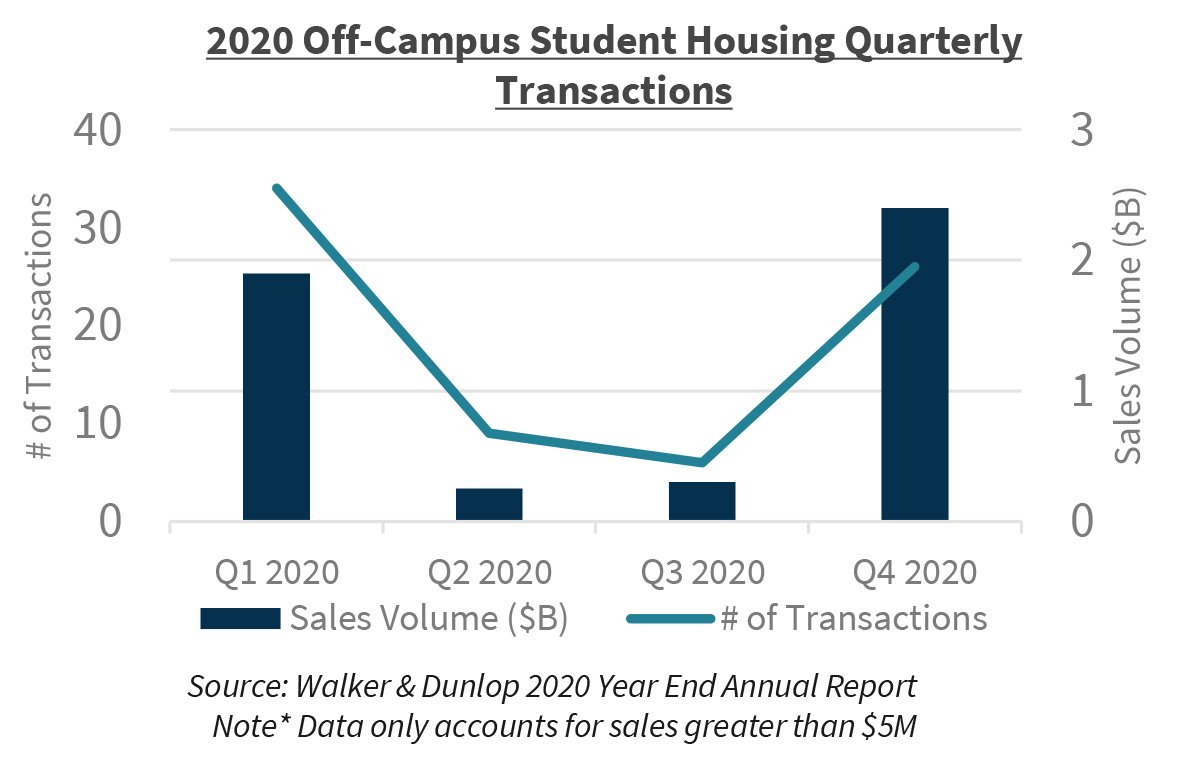 Short-Term Fix For a Long-Term Issue

The elephant in the room for the student housing industry has been declining enrollments across the board over the past several years. According to the National Student Clearinghouse, as of fall 2020, undergraduate enrollment had declined by 4.4 percent year over year. The pandemic had a huge impact on freshmen enrollment as enrollment contracted by 13 percent during the same period. The timing of the pandemic’s arrival also impacted the college enrollment season, as many students were just finding out the status of their fall 2020 applications. Even before the arrival of the pandemic, college enrollments had been in decline for the last several years. The most significant reason is that the current generation of students, Generation Z, is much smaller compared to the previous generation of students (in particular, Millennials, who remain the nation’s largest age cohort).

Even though enrollments took a massive hit during the pandemic, as it was harder to justify the price of higher education at a time in which most schools were conducting remote learning, schools pivoted to a short-term fix that could potentially have long-term ramifications.

According to The Wall Street Journal, several schools, including many Ivy League and other more-selective schools, decided to waive standardized testing scores. As a result, almost all of these schools saw a dramatic increase in applications. While it is unknown whether the increased number of applicants will result in a higher number of acceptances, it is clear the waiving of standardized testing had a positive impact on the number of applicants. If schools decide to continue waiving test requirements post-COVID, it may help solve the declining enrollment issue. A higher number of accepted students is also a boon for off-campus student housing, as more students will increase overall demand, prompting developers to deliver higher amounts of supply.

A Light at the End of the Tunnel

The 2020-21 school year was one in which the student housing sector learned to adapt. Every participant in the student housing sector – schools, students, developers – were forced to adapt during a year that was severely disrupted by the pandemic. Adapting had its ripple effects, as fundamentals such as occupancies, rent growth, pre-leases, and even enrollments all saw significant declines in the latter half of 2020. However, it appears those declines were likely short- term, as fundamentals have meaningfully improved and returned to pre-COVID levels as of spring 2021. Much of the improvement in the student housing space can be attributed to the advent of a vaccine and subsequent widespread inoculations. Off-campus housing has fared much better than its on-campus cohort, but each sector should feel optimistic about a return to normalcy later this fall. Notably, the pandemic may have potentially eased the industry’s concern regarding declining enrollments. If schools accept more students as a result of increased applications due to waiving standardized testing scores, off-campus student housing could benefit substantially post-COVID, as it is generally easier and faster for developers to deliver off-campus supply than on-campus supply.