The COVID-19 pandemic and resulting recession certainly impacted the multifamily sector. Although we estimate the national average rent decline to have been approximately negative 0.5 percent as of third quarter 2020, obviously that has not been the case everywhere. As in the adage that the three most important things about real estate are location, location, and location, the same has held true when it comes to the change in multifamily rent levels.

As seen in the chart below, several of the nation’s largest metros, especially in their more urban centers, have seen a decline in rent growth over the past year, according to data from CoStar Advisory Services. While these include some of the more expensive coastal metros, including San Francisco, San Jose, Boston, Washington, DC, New York, and Los Angeles, there are a few others that might be a bit of a surprise, such as Dallas, Salt Lake City, Minneapolis, Orlando, and Nashville. 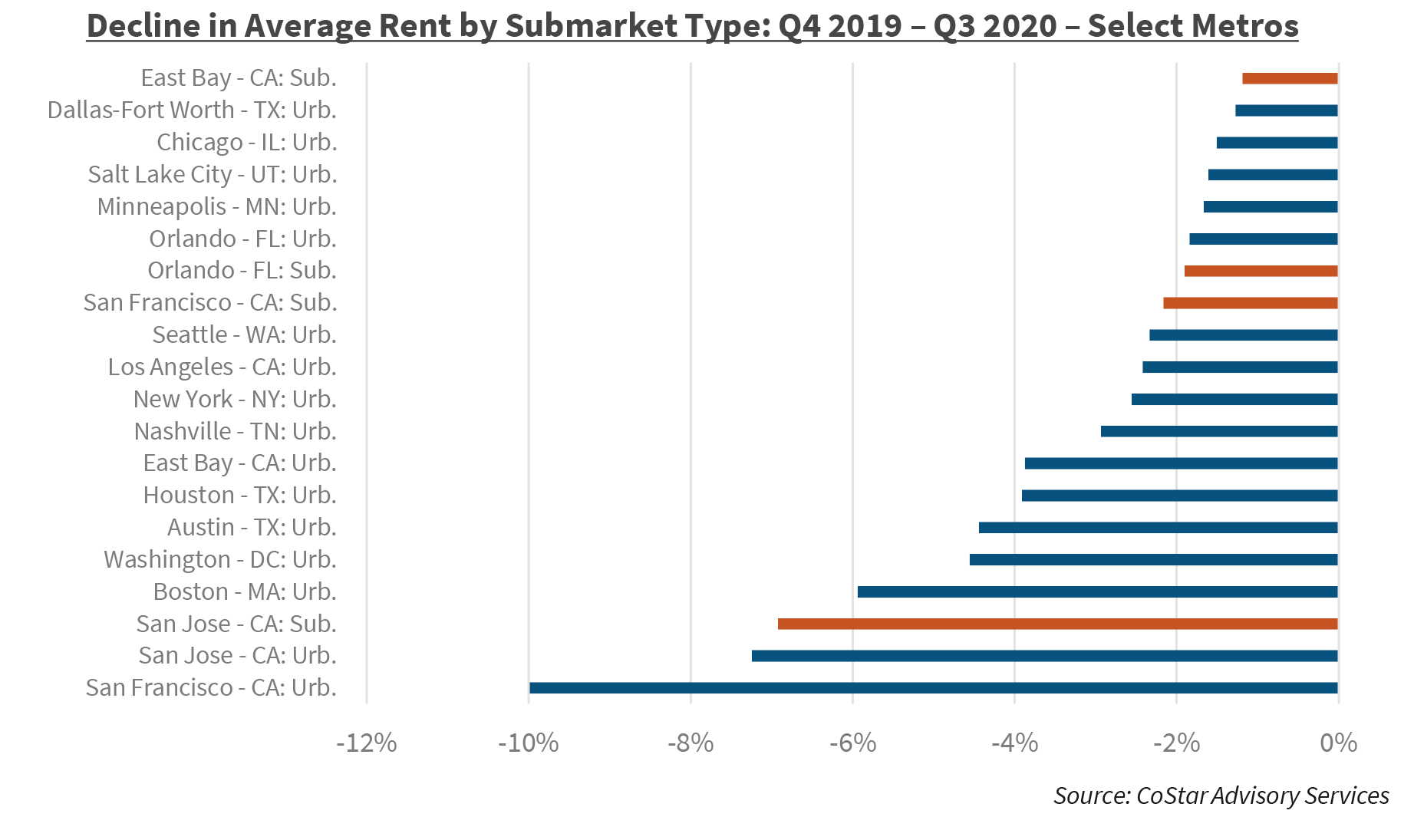 Not Just Leisure and Hospitality Metros

During the first few months of the economic shutdown stemming from the COVID-19 pandemic, there was a concern regarding those metros with looming new supply, and many of the metros listed above have seen an influx of deliveries over the past several months. The other concern regarded those metros with a reliance on leisure and hospitality as primary economic drivers. And while that segment of the labor force is still recovering from job losses that occurred earlier this year, its corresponding metros are not overwhelmingly represented in the list of metros with the biggest rent declines.

That said, there are some metros in the chart above that also rely on tourism to drive their local economies. For example, according to Moody’s Analytics, leisure and hospitality is the fourth largest employment sector in both Los Angeles and New York City, accounting for nearly 12 and 10 percent of employment, respectively. It is the third largest in Austin and Nashville, at nearly 12 percent each, and in San Francisco it’s an even bigger driver as the second largest sector, representing more than 12 percent of all jobs.

Increased Demand in Some Urban and Suburban Submarkets

As seen in the chart below, while there are several suburban locations that have seen an increase in rent growth, they are joined by their corresponding urban submarkets. The Inland Empire (i.e., the Riverside/San Bernandino metro area) is one example for which both the urban and suburban submarkets have been experiencing above average rent growth over the past year, at 5.3 percent and 5.8 percent, respectively.

Despite its reliance on the leisure and hospitality sector, Las Vegas has also seen unexpected demand, with average rent growth of 5.0 percent in its suburban locations and even 3.4 percent rent growth in its urban locations, according to data from CoStar. Tucson and Sacramento have similarly seen increased demand for multifamily rentals in both their urban and suburban locations. 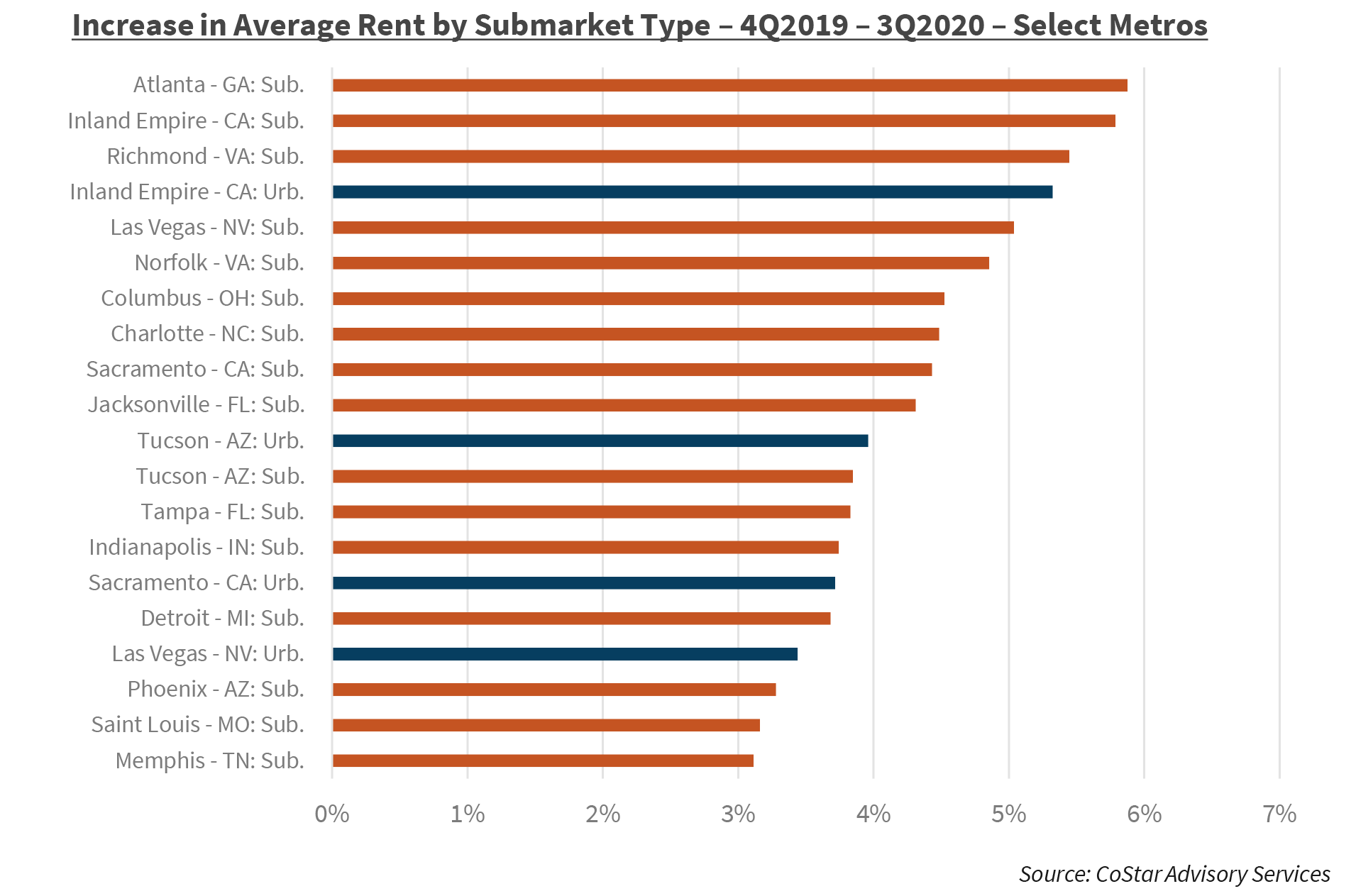 The suburban locations of some Midwest and non-coastal metros are also experiencing increasing rent growth since the fourth quarter of 2019. These include Columbus, Indianapolis, Detroit, Memphis, and St. Louis. What these metros have in common is that their economies are in large part driven by logistics and/or manufacturing.

... as Are Some Coastal Metros

Other suburban locations that are also seeing increased rent growth include Richmond, Norfolk, Tampa, and Jacksonville’s suburban locations. The local economies of the two Florida metros, as well as Norfolk, are also driven primarily by logistics rather than tourism, which we believe is helping keep multifamily demand positive.

The Impact of New Supply...

The run-up in new supply expected to deliver in 2020 has been years in the making. We expect at least 350,000 new units to complete this year with more than 714,000 units underway, according to data from Dodge Data & Analytics. We believe that the elevated amount of new supply entering certain metros and submarkets this year has further stressed rent growth and resulted in rising concessions.

As seen in the tables below, some of the metros with the biggest increase in multifamily units over the past year are experiencing declining rents. Boston, one of the more negatively impacted urban metros, experienced a 4.6 percent increase in multifamily inventory in its urban locations and saw rents fall 5.9 percent. Nashville had rents decline 2.9 percent in its urban locations as multifamily inventory climbed 4.4 percent. Orlando’s suburban locations have had rent declines on average of 1.9 percent while inventories increased by 3.8 percent.

... is Not Always the Reason for Falling Rents

However, other metros, both in their urban and suburban locations, have not seen much new supply added and yet rents declined anyway. The urban locations of Los Angeles, New York, San Francisco, and Seattle have all had less than 2.0 percent of new inventory added over the past four quarters, but rents declined by 2.3 percent in Seattle’s urban locations and approximately 10 percent in San Francisco’s urban locations. We believe that despite the moderate amount of new supply added in these metros, the dearth of demand, which is pushing down rent levels so dramatically, is stemming from telework options that allow workers to live further away in less expensive locations. Many of the metros with the deepest declines in rent levels are also some of the nation’s most expensive. 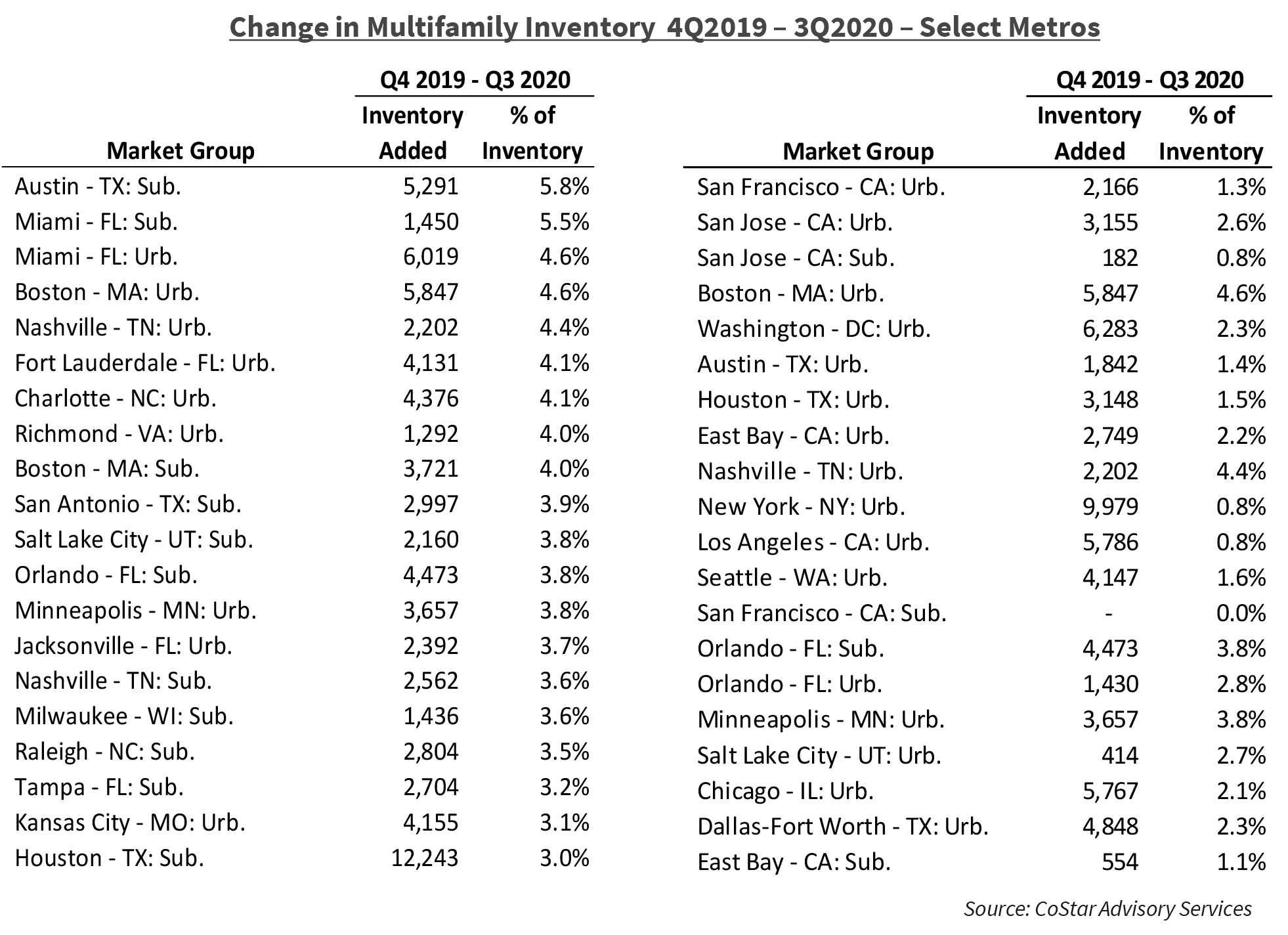 Multifamily concession rates have been rising across the country over the past several months. Concessions are enticements with an economic value for renters, such as periods of free rent, free utilities, or other amenities. Recent concessions data from RealPage, Inc. has shown show that, on a national basis – and in most markets around the country – property owners have increased the value of the concessions they have been offering in order to attract and retain paying tenants. On a national basis, the value of concessions (for those units offering concessions) has surged to 8.5 percent of annual asking rents – slightly more than a month’s free rent – after staying well below 6.5% for several years.

As seen in the charts below, there are several metros that have concession rates well above the national average – and it’s likely no surprise that many of them are the same higher-cost metros that have experienced some of the biggest rent declines. The New York City metro has one of the highest concession rates in the country, currently at an estimated 14.8 percent, according to RealPage, Inc., but San Francisco, San Jose, and Boston are not far behind at 13.7 percent, 12.2 percent, and 11.2 percent, respectively.

By comparison, other metros that have experienced an increase in rents – Atlanta, Charlotte, Columbus, Las Vegas, the Inland Empire, Sacramento, and Tampa – have also seen an increase in concessions, just to a lesser extent. Of these metros, the two California metros have experienced the biggest increases in their estimated concession rates, with Sacramento increasing over the past 12 months by 320 basis points to 6.6 percent, and Riverside by 180 basis points to 5.4 percent, as of October 2020.

In contrast, Columbus and Indianapolis only rose 50 basis points over that same timeframe, to 8.1 percent and 5.8 percent, respectively. And Las Vegas rose only by 100 basis points, to an estimated concession rate of 5.2 percent – well below the national average. 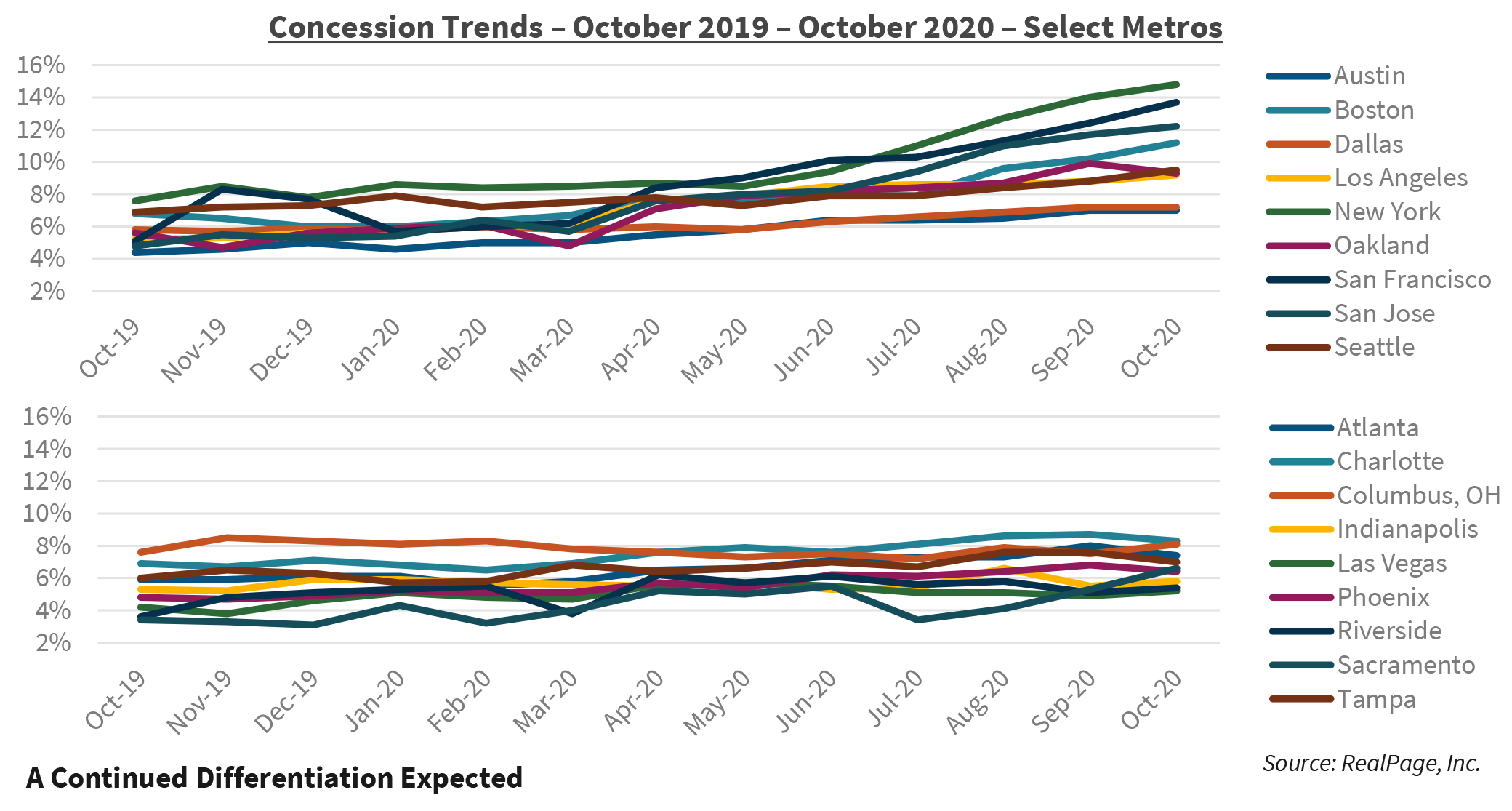 Based on current trends, we believe that the demand for suburban relative to urban locations will continue into early 2021. The continued reliance on teleworking in the face of the ongoing pandemic suggests that some tenants that are working and able to pay rent – and that don’t have to commute to their jobs each day – will seek out cheaper options in some suburban locations, thanks to rising concessions and lower rents. How long the trend will last is a bigger question. If additional outbreaks continue or worsen and local economies endure rounds of additional shutdowns, we believe multifamily fundamentals, especially rent growth and concessions, could remain stressed well into 2021.

Opinions, analyses, estimates, forecasts and other views of Fannie Mae's Economic and Strategic Research (ESR) Group included in these materials should not be construed as indicating Fannie Mae's business prospects or expected results, are based on a number of assumptions, and are subject to change without notice. How this information affects Fannie Mae will depend on many factors. Although the ESR group bases its opinions, analyses, estimates, forecasts and other views on information it considers reliable, it does not guarantee that the information provided in these materials is accurate, current or suitable for any particular purpose. Changes in the assumptions or the information underlying these views could produce materially different results. The analyses, opinions, estimates, forecasts and other views published by the ESR group represent the views of that group as of the date indicated and do not necessarily represent the views of Fannie Mae or its management.