New off-campus student housing development is enduring the same supply chain issues and labor shortages that are impacting the larger construction industry, thereby stalling new deliveries for the next 12 to 18 months, as seen in the chart below. Additionally, enrollment rates are continuing to decline, due to what we believe is a combination of demographic trends, job growth, elevated tuition costs, and inflation levels not seen in nearly 40 years.

New off-campus student housing supply has been trending downward since 2016, as seen above. For the third consecutive school year, new supply is anticipated to keep declining, after falling to just 35,000 beds this past fall 2021 semester. Only 31,300 new beds are expected for the upcoming fall 2022 school year and just 29,000 new beds for the following school year, which would be a new low in terms of deliveries over the past decade.

This trend of moderating supply was not unexpected. Indeed, the off-campus student housing sector had been oversupplied for quite some time. Between 2013 and 2016 there were approximately 241,000 beds delivered, and since then the number of beds delivered annually has been steadily decreasing. Many off-campus student housing developers realized that declining enrollments were resulting in a softening of demand and began curtailing the number of new development projects. Additionally, due to a combination of higher building material prices and the ongoing supply chain issues, many developers are narrowing their pipelines to focus on more timely projects that will deliver in the near term. As a result, new supply has fallen and is now more in line with expected demand.

At the beginning of the pandemic in March 2020, many college and university campuses began to close and, as a result, off-campus student housing rent growth declined dramatically that year, as seen in the chart below. Although off-campus student housing remained open, many students opted to stay at home. By the fall 2021 semester, there was elevated pent-up demand stemming from a variety of students, including those that had deferred their 2020 acceptances, taken a gap year in the hopes of waiting out the pandemic, and new and returning students that were now willing to attend school in-person due to the availability of COVID-19 vaccines.

Off-campus student housing rent growth has remained positive over the past several years, including during 2020 when it squeaked by with just 0.5% annual rent growth, despite declining 4.4 percentage points year over year. However, due to the spike in demand the following year, rent growth in 2021 accelerated to a new high, rising an estimated 8.3%, besting the previous high of 6.1% in 2015.

The amount of asking rents per bed rose alongside the higher rates of rent growth. For the year ending 2021, the asking rents per bed at off-campus student housing properties was estimated at approximately $943 compared to $871 per bed in 2020, according to data from RealPage, Inc. The increase of $72 per bed between 2020 and 2021 was the highest on record, and it’s much higher than the average annual increase of $32 per bed since 2013. The 2021 rate was a return to a more normalized increase after asking rents per bed had increased by just $4 in 2020 due to the lack of demand stemming from the pandemic. 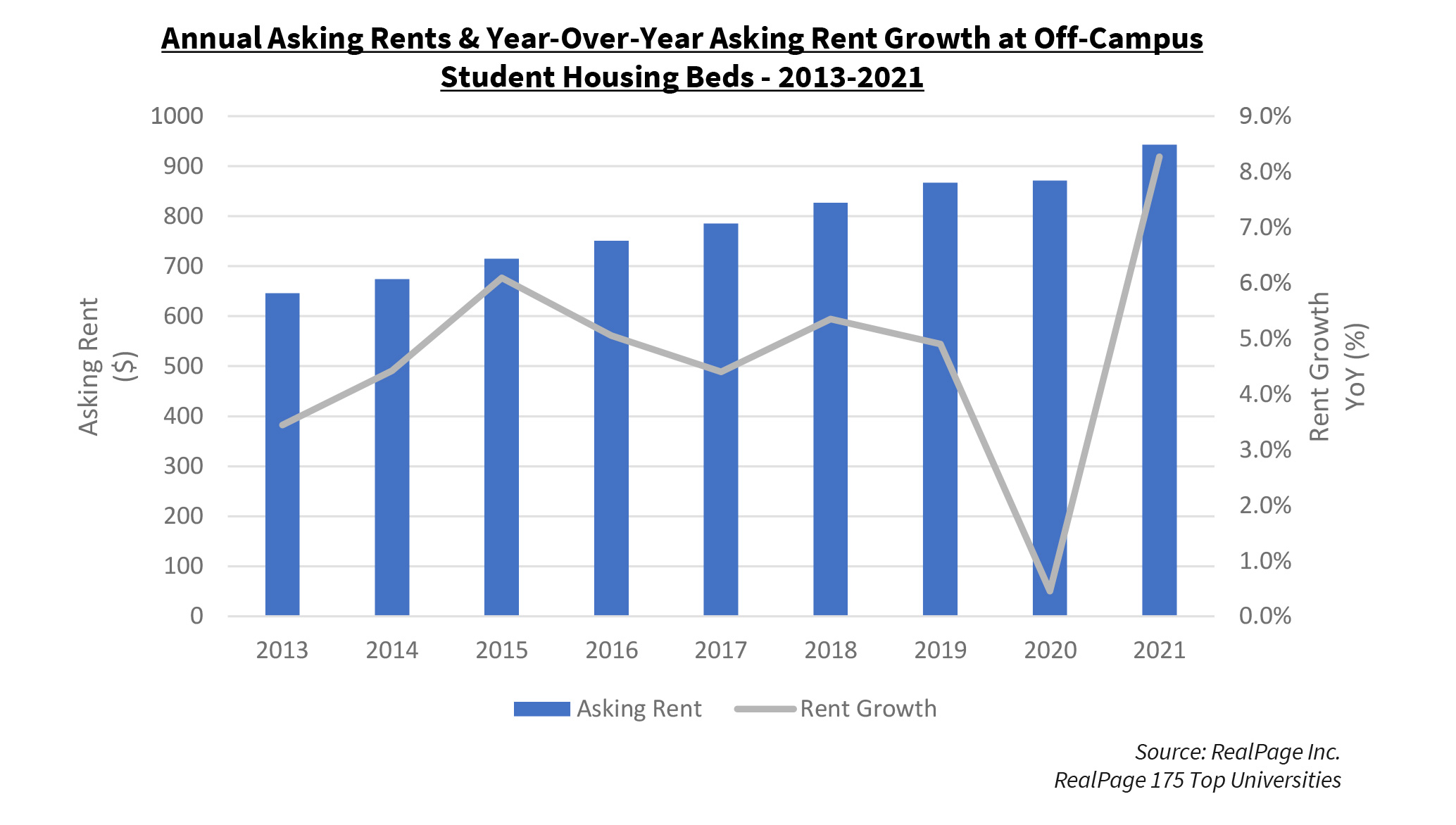 According to the National Student Clearinghouse Research Center, as of spring 2022, total undergraduate enrollment declined by 4.2% year over year, after having already declined by 3.5% in the spring 2021 semester. Declining college enrollments have trended downward over the past few years, and we expect that softer demand will continue for the next few years, due in part to rising tuition costs, which we’ll discuss below, and record levels of inflation.

In 2020, weighted tuition growth was approximately 0.9% compared to enrollment growth of 0.6% . The current cohort of Generation Z college-age students is less populous than the previous and biggest cohort of Millennials. In addition, high school graduation rates have been declining in recent years, resulting in a smaller pool of potential college-age students. Enrollment growth has not exceeded 1% since 2017, and it bears watching if weighted tuition growth continues to increase, perhaps to help compensate for fewer students. 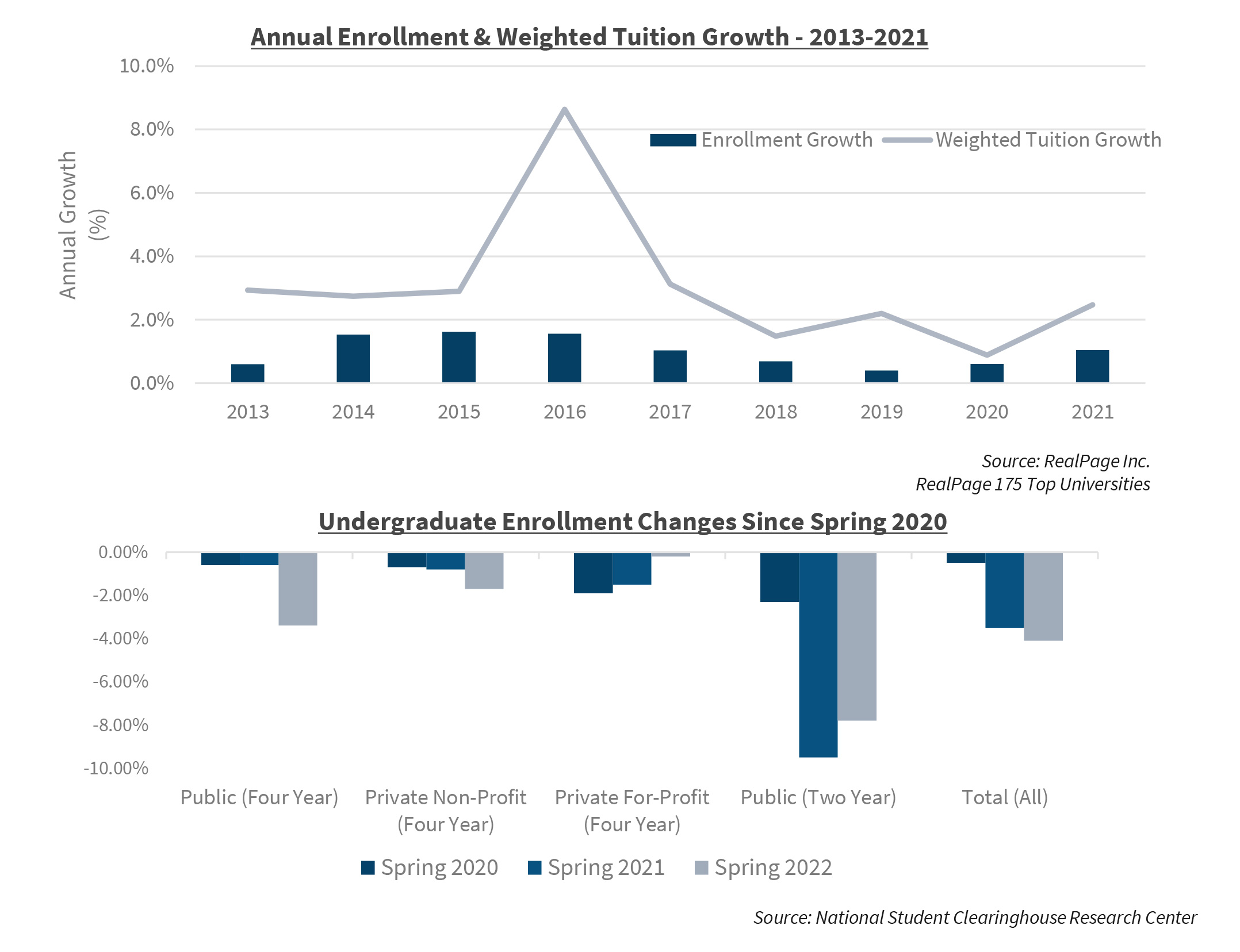 New Supply Concentrated in the Southeast

According to RealPage Inc., much of the 31,300 new beds expected this year are being delivered to schools primarily located in the southeastern region of the country. Virginia Polytechnic Institute and State University ( Virginia Tech) is expected to have the largest amount of new off-campus housing supply delivered, with at least 1,920 beds in the upcoming school year. The University of Florida and the University of Washington round out the top three, expecting 1,672 and 1,616 beds, respectively. The 14 schools listed in the table below account for 18,000 new beds, which is nearly 57% of the expected new supply for fall 2022. 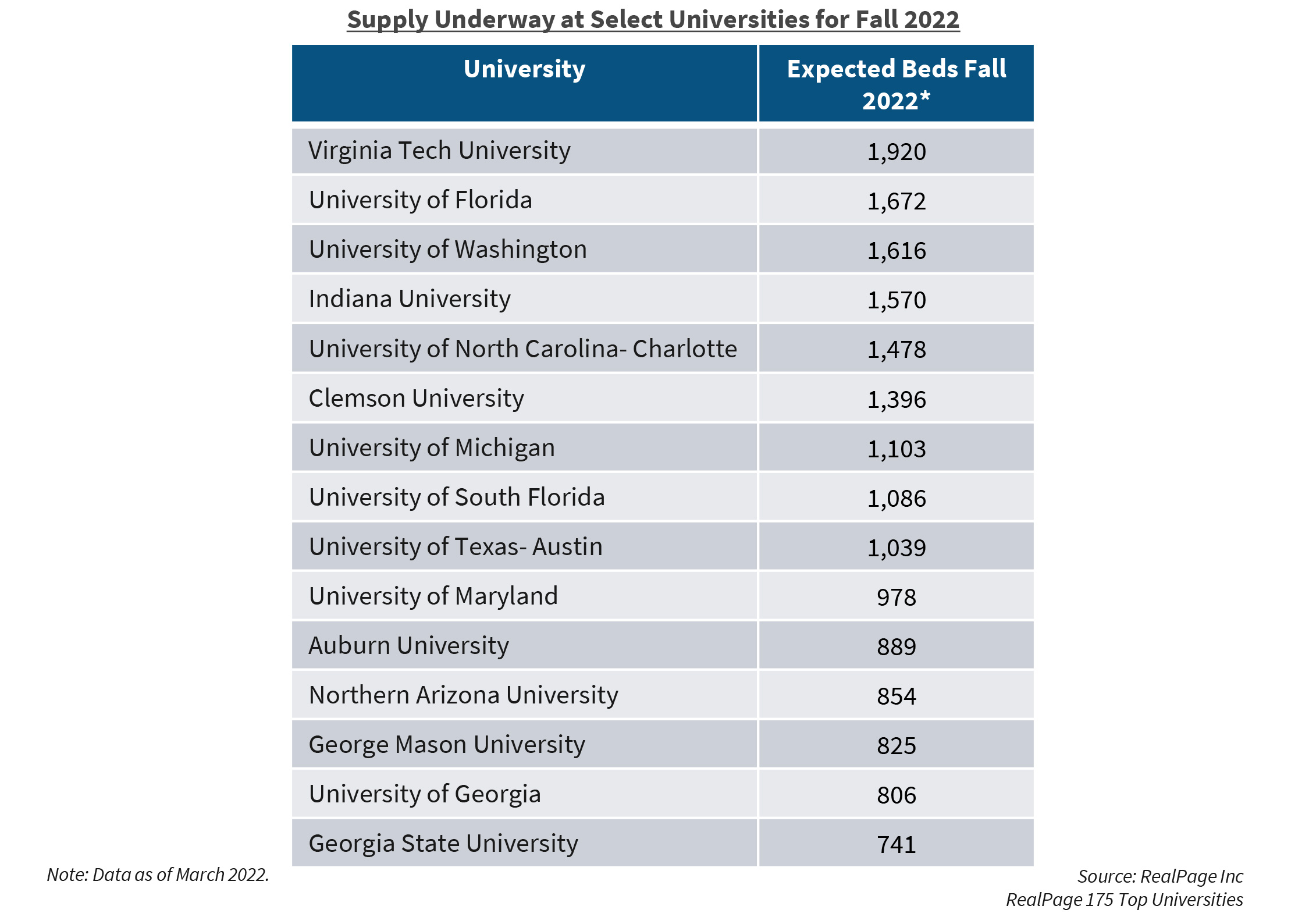 The off-campus student housing sector emerged from the pandemic and achieved performance levels that exceeded pre-pandemic highs, but that is not necessarily an indicator of future trends. New supply has continued to moderate and is now on track to deliver the lowest amount in more than a decade for both the upcoming fall 2022 and 2023 school years.

The headwinds that persist for the student housing sector are a combination of demographic and economic. With weighted tuition costs continuing to rise faster than overall enrollment growth rates, the supply of off-campus student housing is likely to continue to decline, potentially worsened by a dwindling applicant pool. We believe the student housing sector will need to come up with creative ways to encourage those students that do enroll in colleges and universities to choose off-campus housing, and to continue to do so over the long term.