Impacted by recent tornadoes or other disasters? We’re helping homeowners and renters get personalized disaster assistance ››

As the housing affordability crisis has deepened, manufactured housing is garnering more interest as an important source of affordable housing, particularly among rural and low-income households. In addition, it costs significantly less and takes less time to build a new manufactured home than to build a new site-built home of comparable size. As a result, manufactured housing has the potential to be an important tool in adding new homes to housing supply despite the likely slowdown in the shipments of new homes due to recent elevated levels of job loss.

Manufactured housing refers to housing built in a factory after June 15, 1976 and constructed in accordance with the U.S. Department of Housing and Urban Development’s Manufactured Home Construction and Safety Standards code (HUD Code), which sets minimum standards for size and quality of construction. Factory-built manufactured homes that meet these standards post a HUD label and are subject to federal regulations that supersede local building regulations. Homes built before this date are considered mobile homes and are typically of a lesser quality construction.

An estimated 18 million Americans live in manufactured homes. While most manufactured homes are owned, with 4.8 million homes occupied by owner households, there are also 1.9 million units occupied by renter households. In 2018, there were another 680,000 homes classified for seasonal or recreational use and another 860,000 units which were vacant. 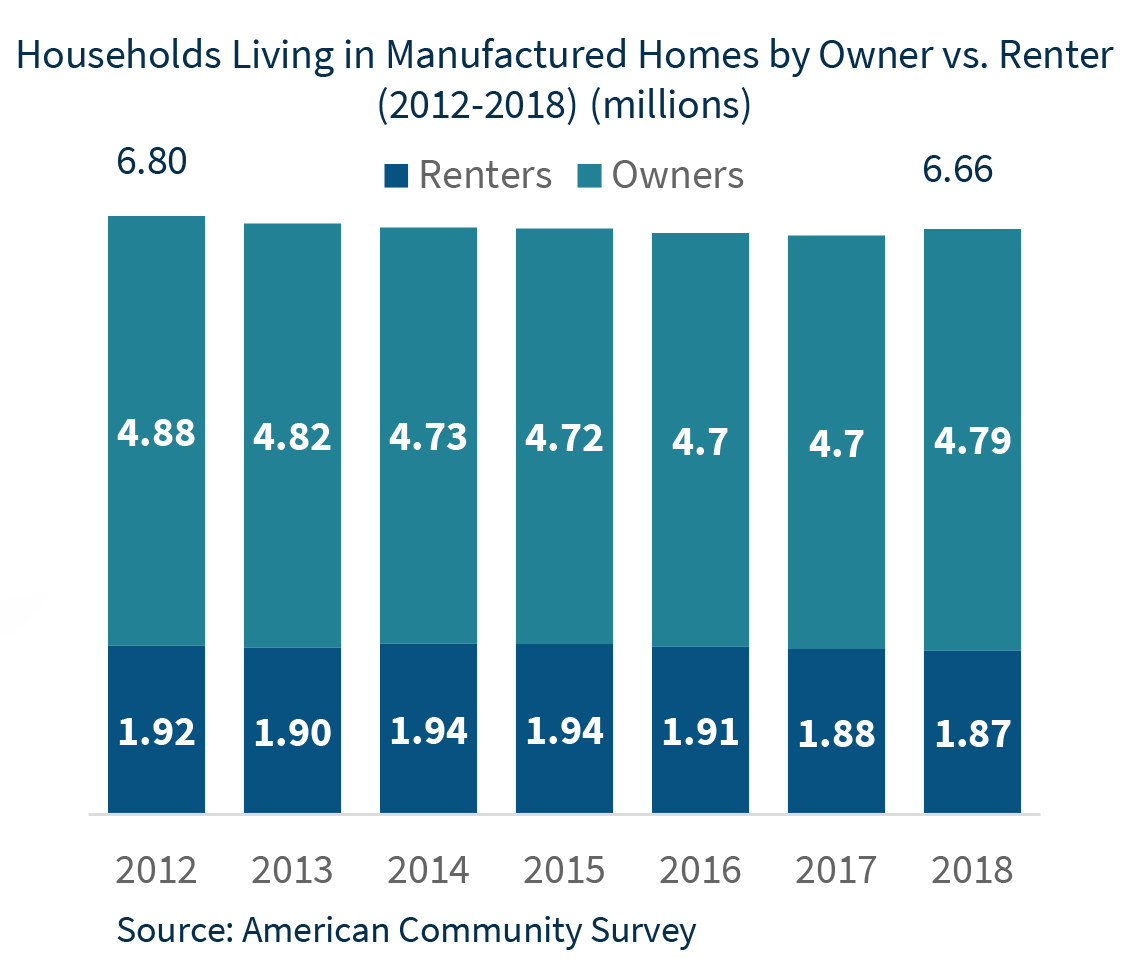 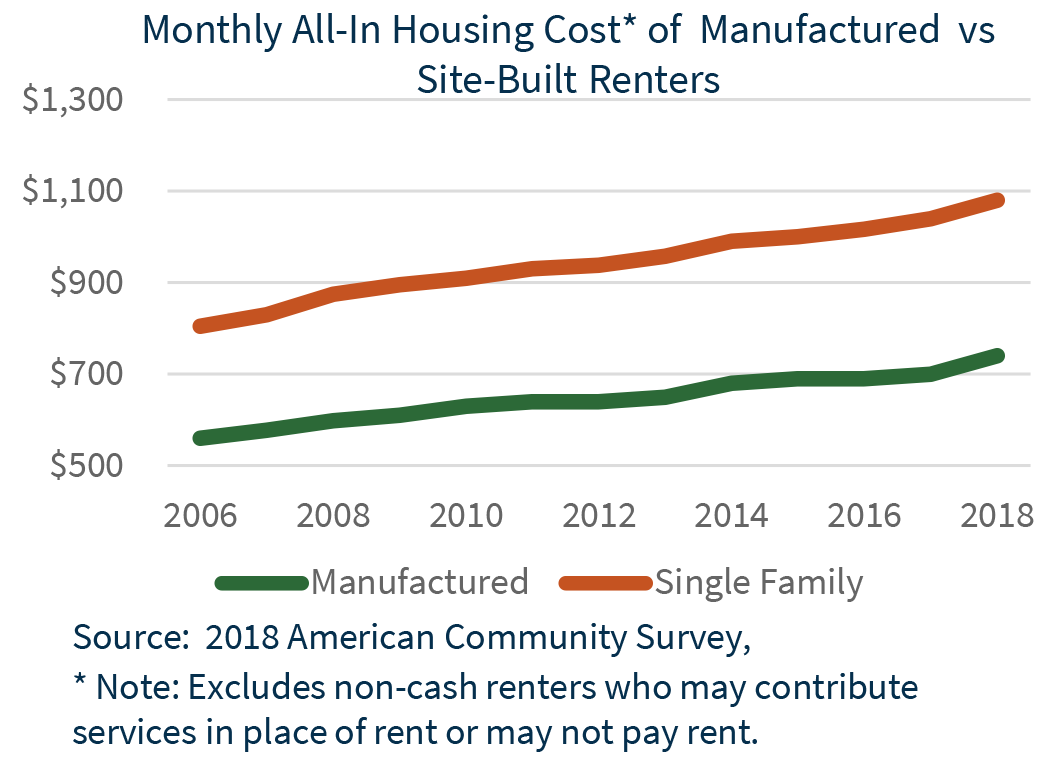 One solution to addressing the nation’s housing supply shortage is to build more homes. New factory-built manufactured homes, which can be built as single- or multiple-section homes, appear to be significantly more affordable than site-built homes. 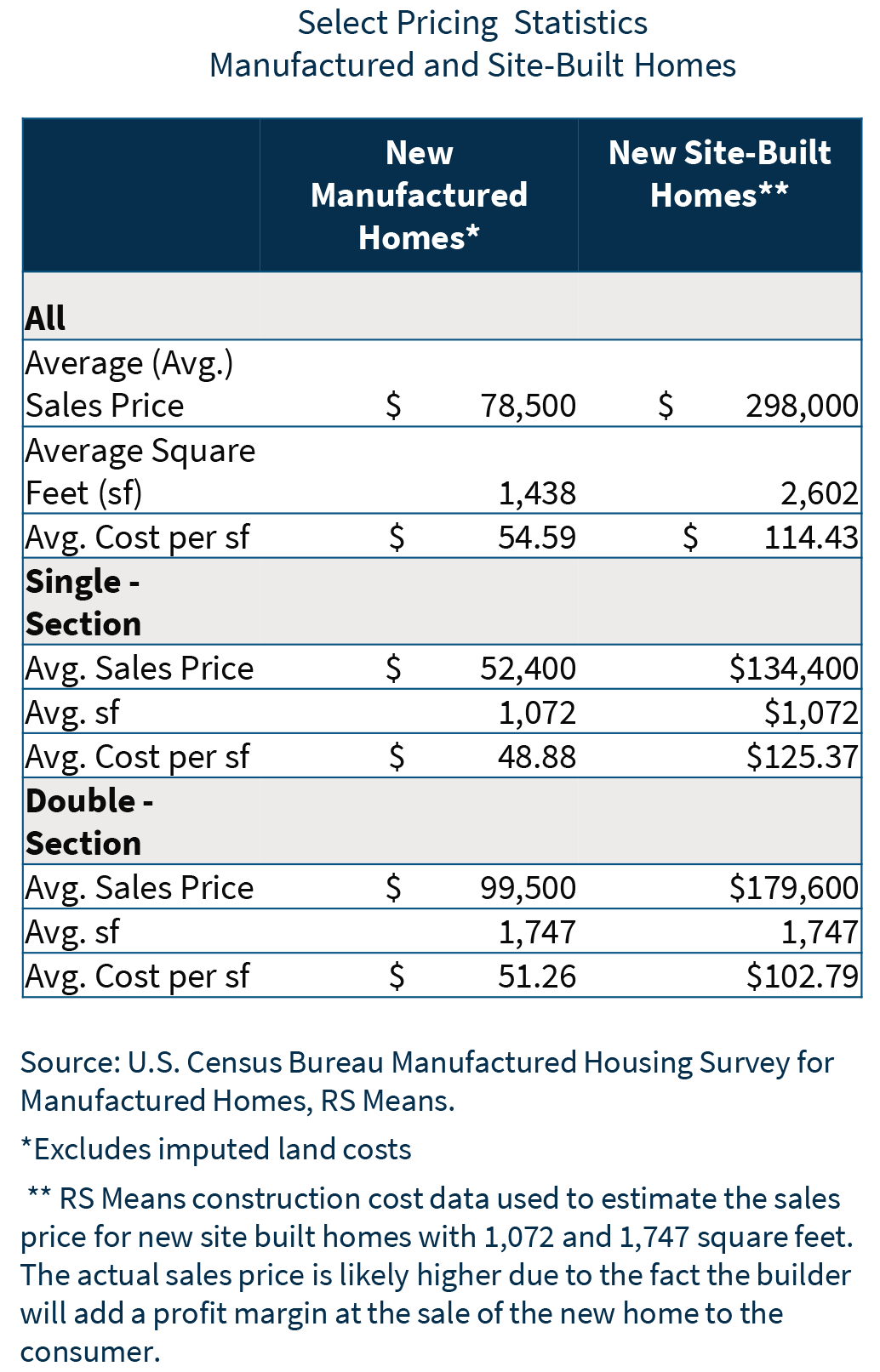 Manufactured homes do have additional costs compared to a site-built home. For instance, new manufactured homes cost about $5,000 per section to ship, in addition to costs for installation and utility hookup. According to Next Step Network, a non-profit specializing in manufactured homes, the all-in cost to deliver, set, and finish a manufactured home can range from $21,000 for a single-section home to

A manufactured home can also be built very quickly. According to one manufactured home producer, it takes about six production days to complete a typical home. While delivery and installation require additional time, a homeowner is generally living in a manufactured home within 90 days. By contrast, a site-built home can take up to si

The Number of Manufactured Homes Shipped in Long-Term Decline

The number of new manufactured homes ordered and shipped has declined substantially over the past 20 years and hit a low of just 50,000 homes shipped after the recession ended in 2009. While the number of homes purchased and shipped increased as the economy rebounded, the level of shipments remains depressed. An estimated 95,000 new manufactured homes shipped in 2019, which is well below the long-term average since 1980 of 185,000 homes. The share of manufactured homes compared to all homes sold currently stands at 14%, which is below the 25-30% range recorded

prior to 2000.x months to construct. These factors can make manufactured homes an attractive alternative for some homebuyers. The compressed construction cycle also makes it attractive to some developers and builders.

Industry capacity has declined since the 1990s. In 2019, just 35 manufactured home companies had 133 production lines, and the top three manufacturers produced three-quarters of new homes. Even so, manufacturers have some excess capacity: One of the nation’s largest manufactured home producers, Skyline Homes, Inc., currently has five idle plants, according to a recent investor presentation. Additionally, the number of construction workers is 5% below the level seen a decade ago. Another large manufactured home producer, Cavco Industries, Inc., estimates that a single factory may need up to 400 construction workers. As a result, increased labor, automation, and innovation may be needed to address the backlog of orders listed in these companies’ 2019 10-K financial reports.

Nevertheless, certain states are more favorably disposed to manufactured homes. With the exception of California and Michigan, these states are predominantly located in the south. Texas generally receives the largest share, accounting for about a fifth of new home shipments annually. In fact, shipments to favorably disposed states have grown more concentrated. The top 10 states accounted for 62% of annual shipments in 2018, up from 54% just six years prior. Only one state in the top ten, Louisiana, saw a decline in shipments, to 5.0% in 2018 from 7.4% six years prior. 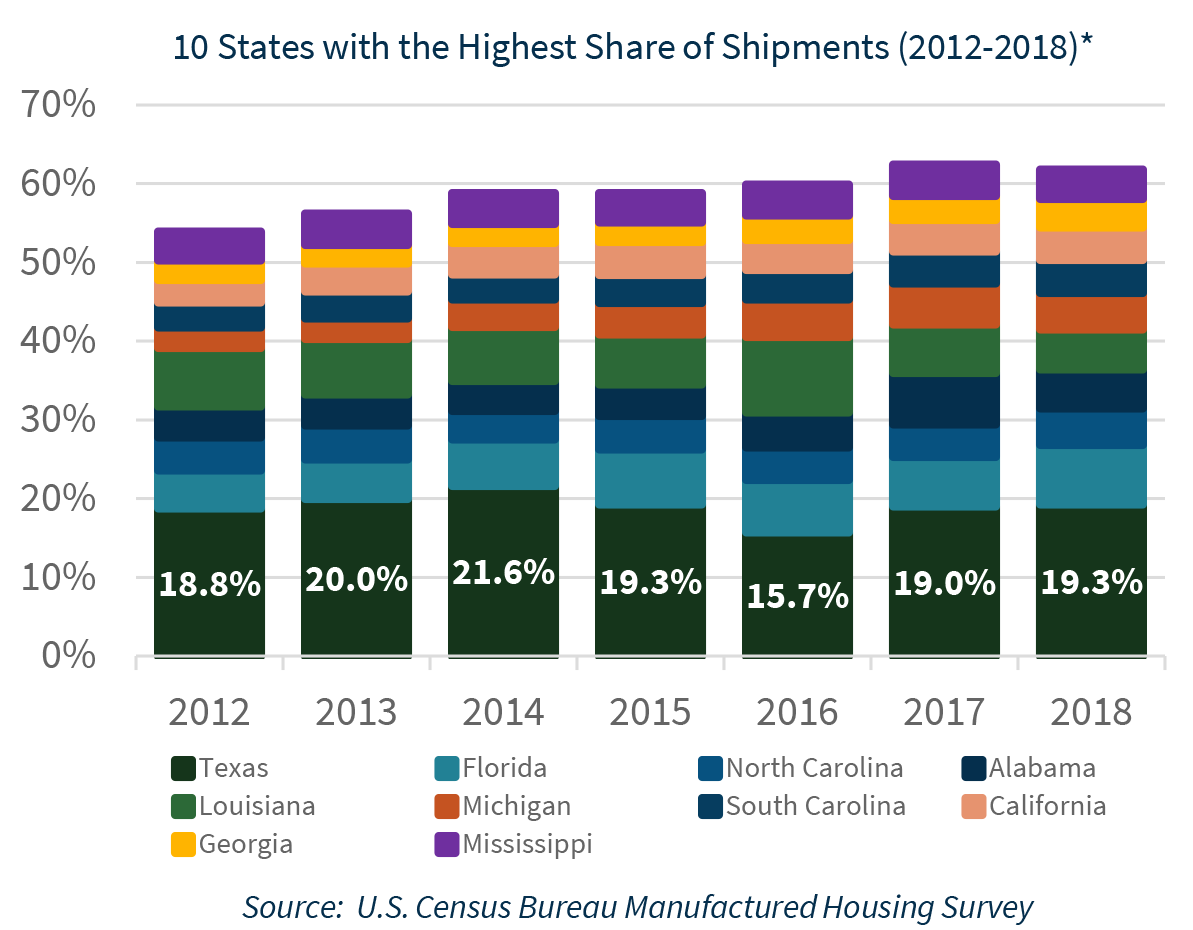 Annual shipments have rebounded since bottoming out at 50,000 in 2010. In fact, shipments to many states have doubled over the past six years. However, even with shipments more than doubling, states such as Nevada, Oregon, New Jersey, and Wisconsin still receive fewer than 500 homes annually. Most states with substantial growth in the number of shipments are southern states such as Florida, Alabama, and Mississippi. Michigan and California were the only states outside of the south to have a substantial increase in both the percentage and number of shipments. 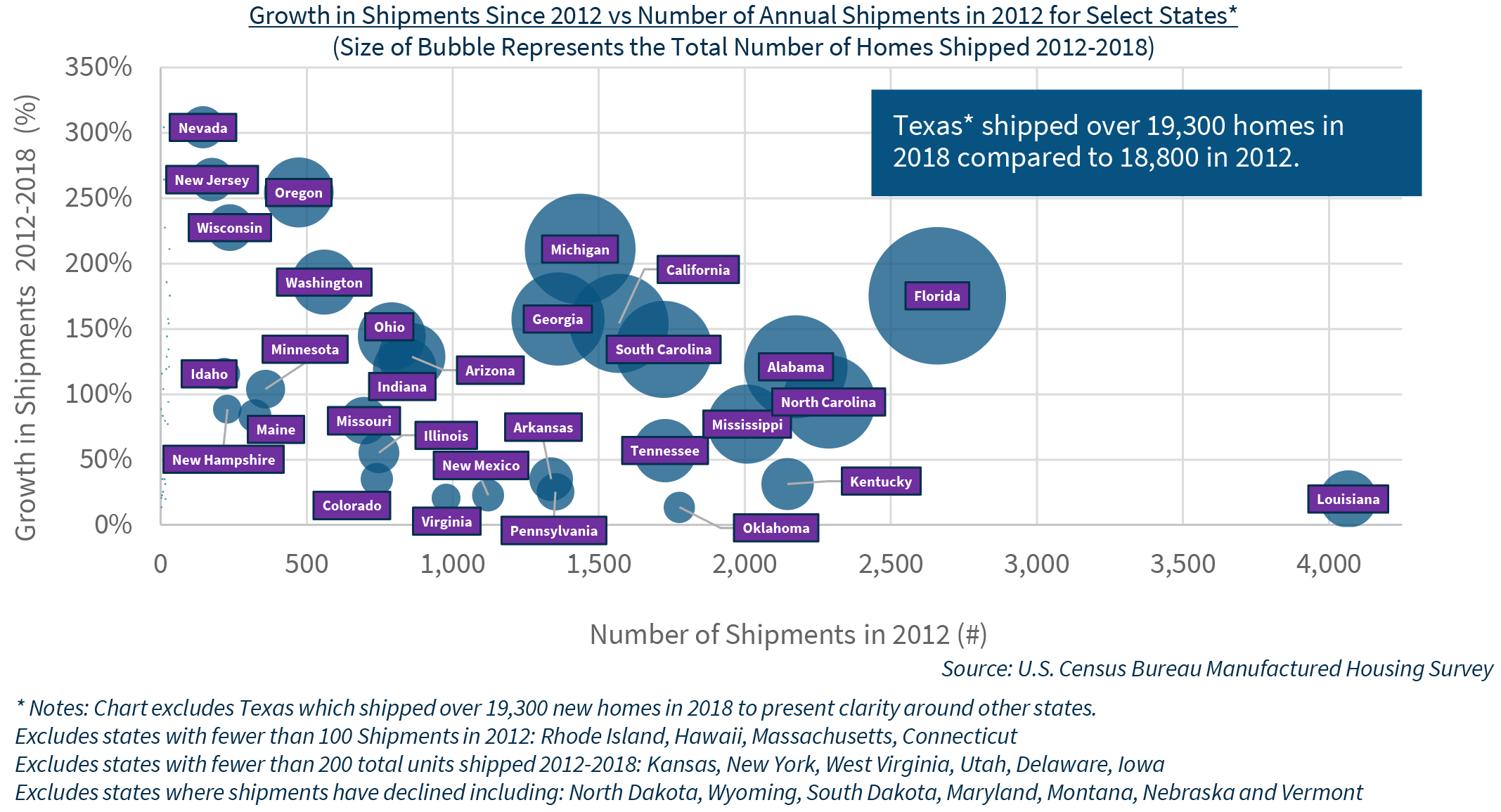 Share of Manufactured Homes Placed in Communities is Rising

Manufactured homes can be placed on privately owned land or placed in communities where homeowners rent a pad-site from the community for a monthly fee. These pads also contain hookups for utilities. According to Sun Communities, Inc., one of the nation’s largest manufactured home community owner- operators, over the past three years, homes placed in their communities were only moved out at a rate of 0.8% per year on average.

Communities are generally classified either as an All Ages Community or a 55+ Community, the latter of which is popular with retirees who want to downsize and minimize home maintenance. Over the past five years, of all shipments, the share of homes shipped to communities has risen from 33% to 37%. 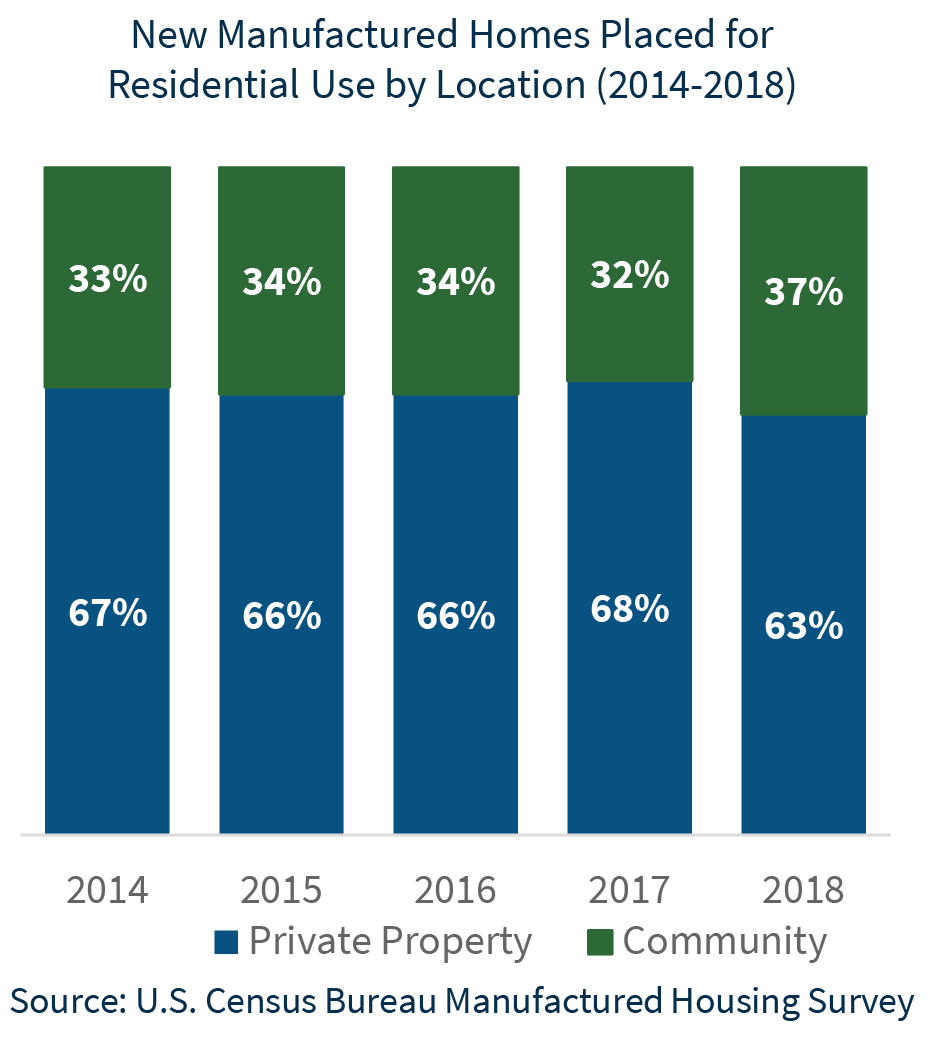 Chattel Financing Can be More Expensive

In general, lenders consider chattel – or “home only” – lending to be riskier since the loan is only secured by the home, whereas a conventional loan is secured by both the land and the home. Data collected under the Home Mortgage Disclosure Act (HMDA) in 2018 suggests that interest rates charged for loans secured only by a manufactured home are higher on average than for a conventional mortgage loan. In 2018, the average interest rate for loans backed only by the manufactured home was 8.5%, compared to 4.7% for loans on site-built single-family homes and 5.4% on loans secured by both the manufactured home and the land on which the home is located. In addition, loan terms are generally 20 years instead of the typical 30 years for fixed-rate mortgages, which increases the monthly payment. Certain chattel financing products may have fewer consumer protections than mortgage loans. Even so, some consumers prefer chattel lending because transaction costs for chattel lending are the time to close the loan is generally faster for chattel. 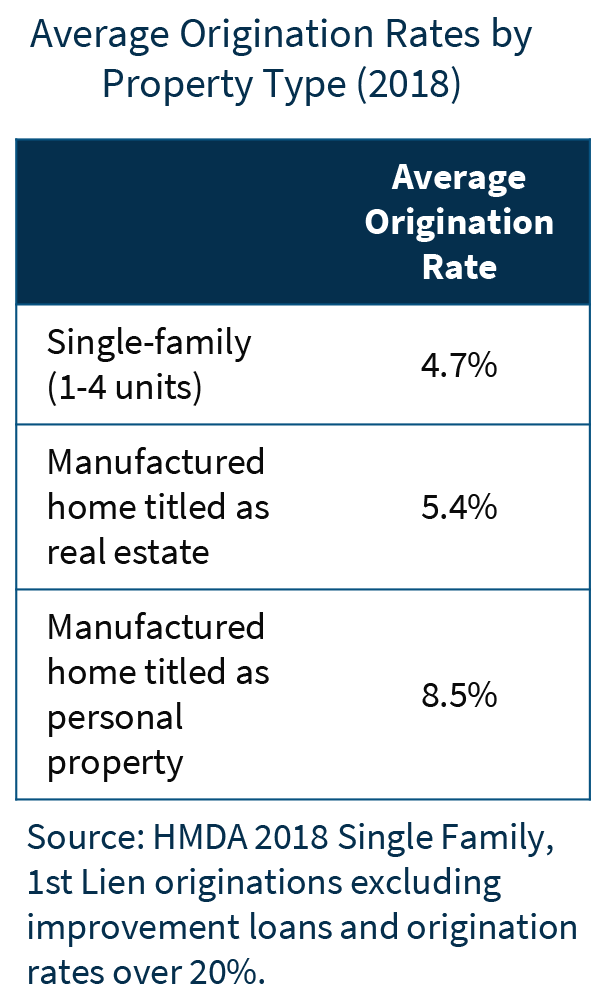 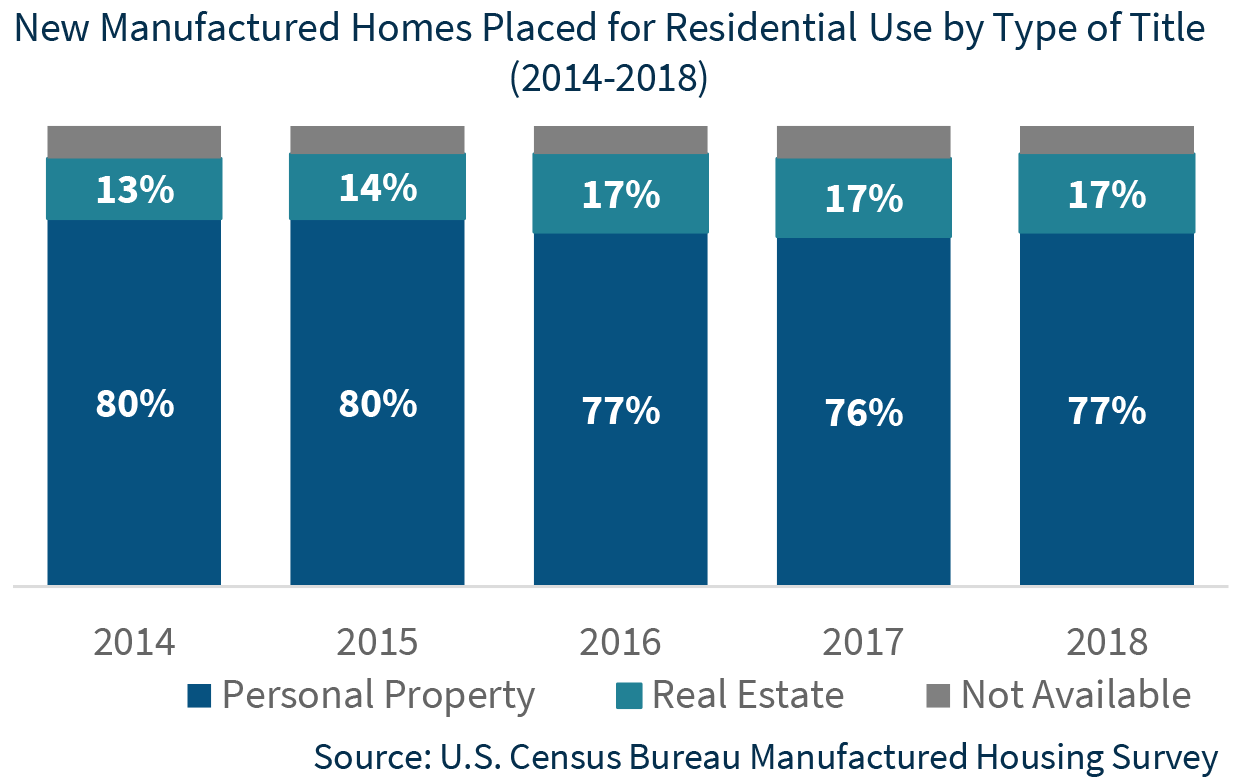 Local Zoning Has Not Kept Pace with Innovations

Some local zoning barriers for manufactured homes are rooted in a preference for municipalities wanting to maintain certain aesthetics that are typical of traditional, site-built homes. Recent innovative designs have made some manufactured homes conforming to the HUD Code visually indistinguishable from site-built homes. These types of manufactured homes may have high-pitched roofs, front porches, and decorative windows and trims. In addition, a recent report from the Federal Housing Finance Agency suggests that manufactured homes affixed to land may appreciate at rates similar to site-built homes, better enabling low- and middle-income families to realize the potential wealth-building benefits of homeownership. Despite this progress, not all state and local regulations have kept up with recent developments.

It is estimated that over a seven-week period ending May 2 2020, over 33 million people filed for unemployment benefits, representing more than 20% of the workforce. Unsurprisingly, manufactured home builders have not been immune to the effects of job loss. Factories are starting to report the cancellation of orders for new homes. In addition, manufacturers are expecting lower output due to a variety of other factors. Next Step Network recently surveyed manufacturers to provide insight into emerging trends. Respondents reported working with 22% fewer staff on average and all reported complying with social distancing. These two factors are expected to slow output. Manufacturers also indicated that they are concerned about a disruption in the supply chain for the materials they use to construct homes, such as lumber, drywall, and fixtures, among other items. As a result, many respondents estimated production would likely be reduced in the coming months. While about half of respondents estimated a reduction of 20% or less, approximately one-fifth estimated production could decline by over 30%. 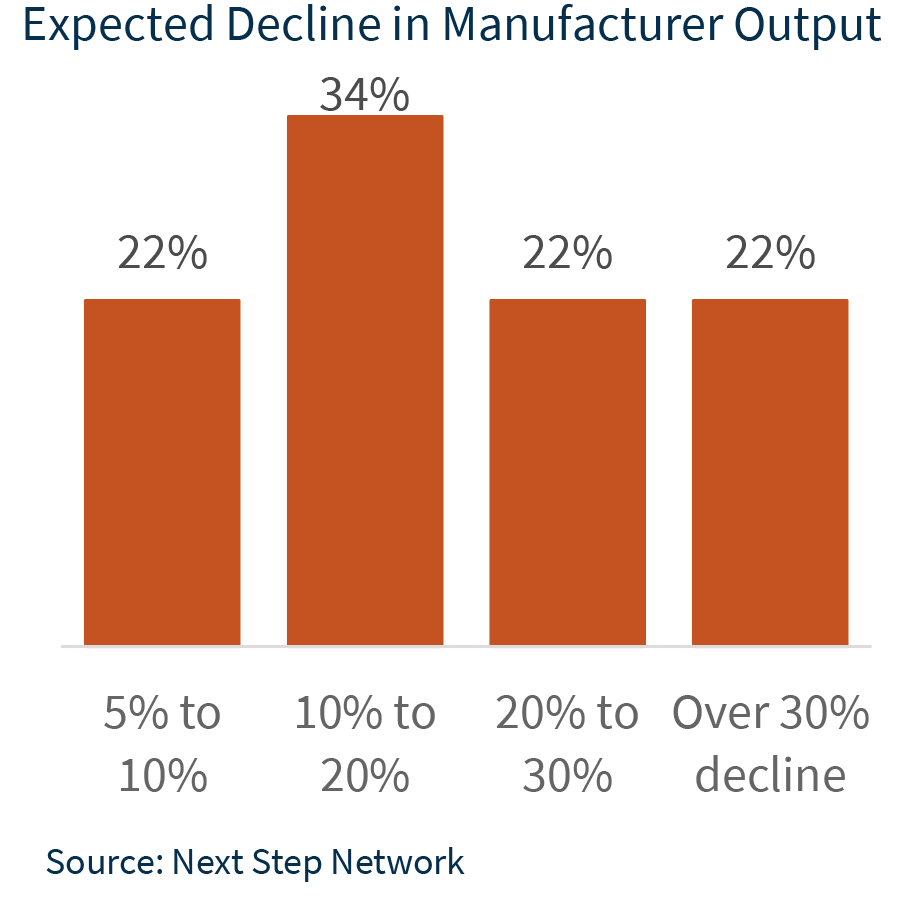 …and Will Likely Reduce Demand for New Homes

Manufactured homes built to the HUD Code are generally sold by retailers that have showrooms with display models for consumers to view. Next Step Network also recently conducted a survey of retailers. While this data is limited, it does provide an insight into recent trends. Respondents indicated that measures have been taken to comply with state/local ordinances related to COVID-19 mitigation, with over 60% restricting business hours, reducing or altering staff hours to maintain social distancing, and requiring an appointment. More than 70% of respondents expect to sell fewer homes in the coming months. Of those, 88% expect up to a 30% decline in home sales.

Manufactured housing retailers are increasingly using technology to close deals in their pipelines and to offset the decrease in foot traffic. Nearly 59% of respondents reported an increase in traffic to their website and that visitors are staying online longer. Thirty-two percent of survey respondents indicated increasing paid digital advertising showcasing homes and over 80% reported using online virtual walk-throughs and other digital tools. However, it remains to be seen if an increase in online traffic is sufficient to make up for the decline in buyers from brick-and-mortar retailers.

We expect that demand in Texas, which receives about 20% of shipments of new homes annually, will likely decline due to the oversupply of oil at a time when there is reduced consumer and industry demand for energy. According to the first quarter Dallas Federal Reserve Energy Survey, two -thirds of support services firms and 45% of exploration and production firms expect to reduce employee counts in 2020, likely contributing to a dampening of demand for new manufactured housing. 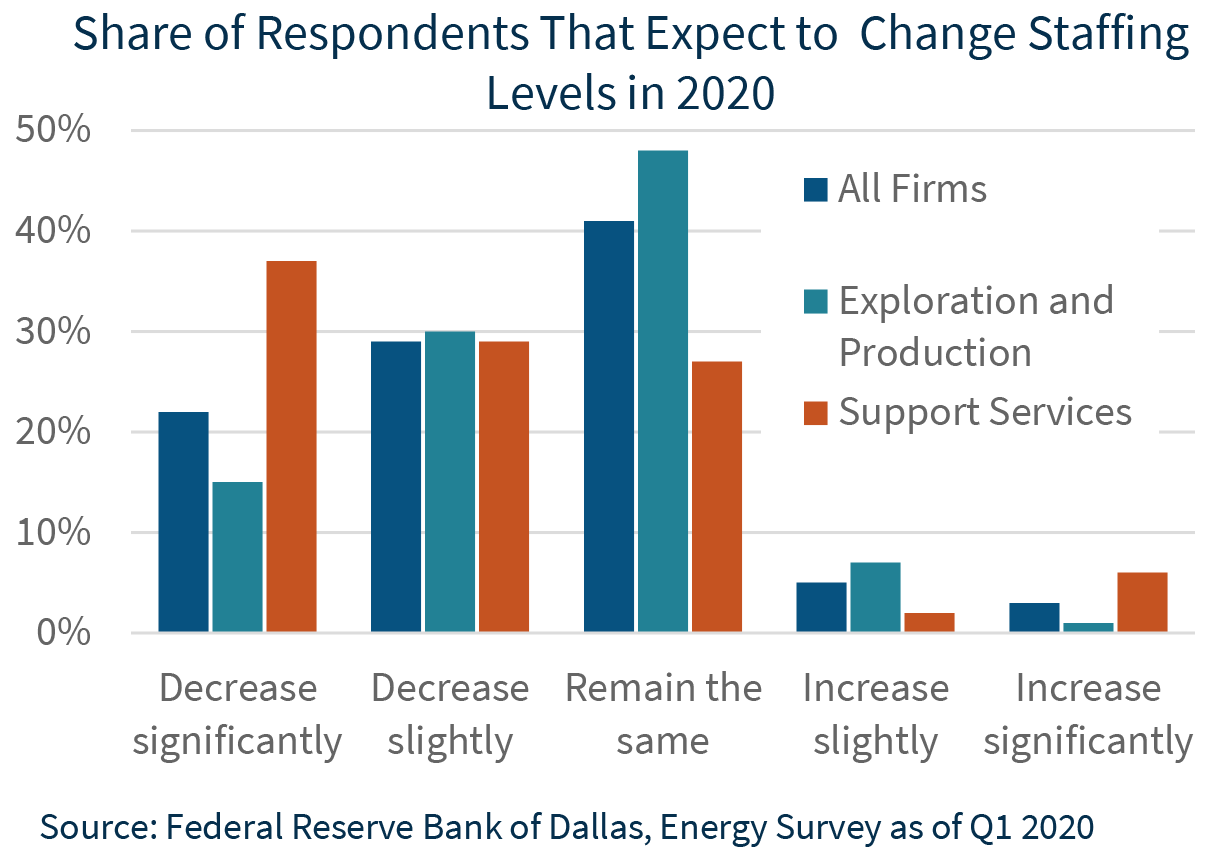 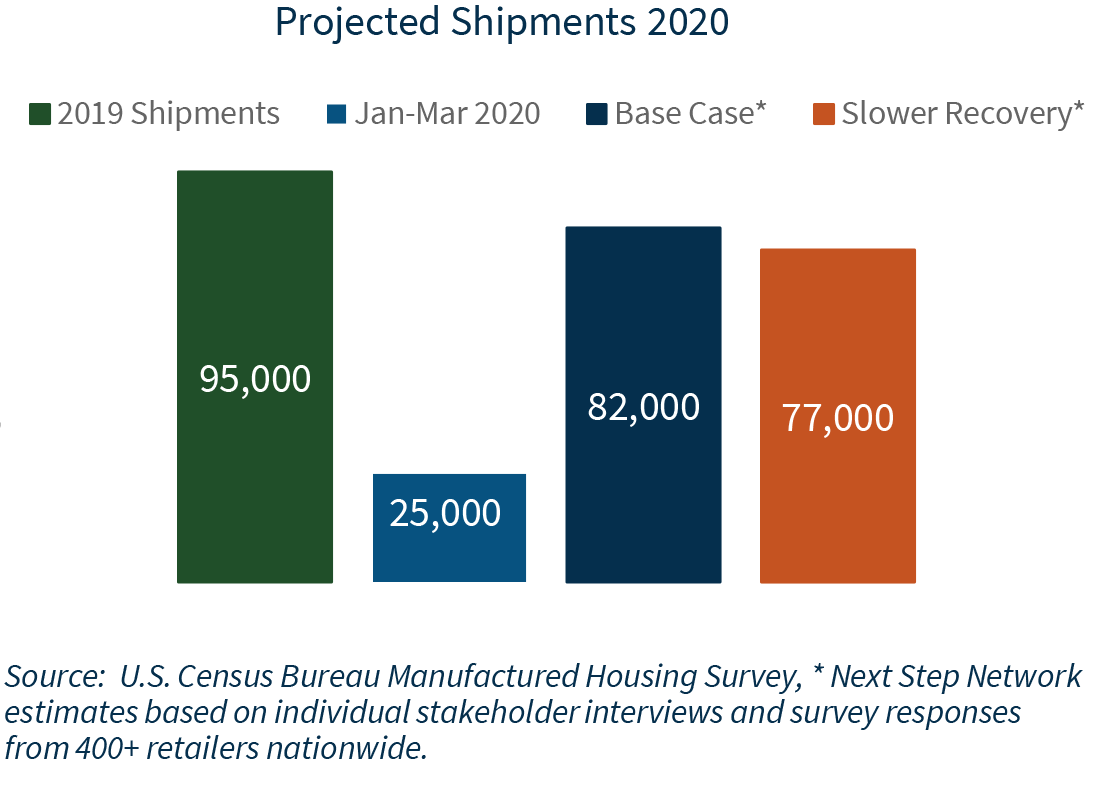 Opinions, analyses, estimates, forecasts, and other views of Fannie Mae’s Multifamily Economics and Research Group (MRG) included in these materials should not be construed as indicating Fannie Mae’s business prospects or expected results, are based on a number of assumptions, and are subject to change without notice. How this information affects Fannie Mae will depend on many factors. Although the MRG bases its opinions, analyses, estimates, forecasts, and other views on information it considers reliable, it does not guarantee that the information provided in these materials is accurate, current, or suitable for any particular purpose. Changes in the assumptions or the information underlying these views could produce materially different results. The analyses, opinions, estimates, forecasts, and other views published by the MRG represent the views of that group as of the date indicated and do not necessarily represent the views of Fannie Mae or its management.