As the Baby Boomers age into their 70s, 80s, and 90s over the next 25 years, the nation's demographic profile will transition in a way that has never been seen before. According to estimates from Oxford Economics, the number of people aged 75 and older in the U.S. stood at approximately 23.3 million at the end of 2021, accounting for an estimated 7.0% of the nation’s population. The population in this age group is expected to grow by 11.3 million people in the next 10 years, rising to 34.6 million, accounting for 9.9% of the population. By 2046, this age cohort of the population will likely comprise 46.9 million people and account for 12.5% of the population, as seen in the chart below.

Such a transformational shift in the composition of the nation’s population will have impacts across multiple facets of life in the country, including job markets and housing. And the impact will not be felt uniformly in every area: There are areas of the country that will likely see exceptional growth among the senior population, while others may just see a modest increase. But we expect nearly every major metropolitan area in the country will see its population composition transition to one that is noticeably older, on average, than it is today.

Where Do Seniors Live Now?

While there is a cliché that every senior citizen wants to retire to Florida or Arizona, the reality is that most want to stay put, for either personal or financial reasons, in the home that they are in and in the community where they have roots. But most does not mean all, and there are several communities that are and will likely continue to be retiree havens.

The Top Three Major Metros Have a Significant Number of Seniors... 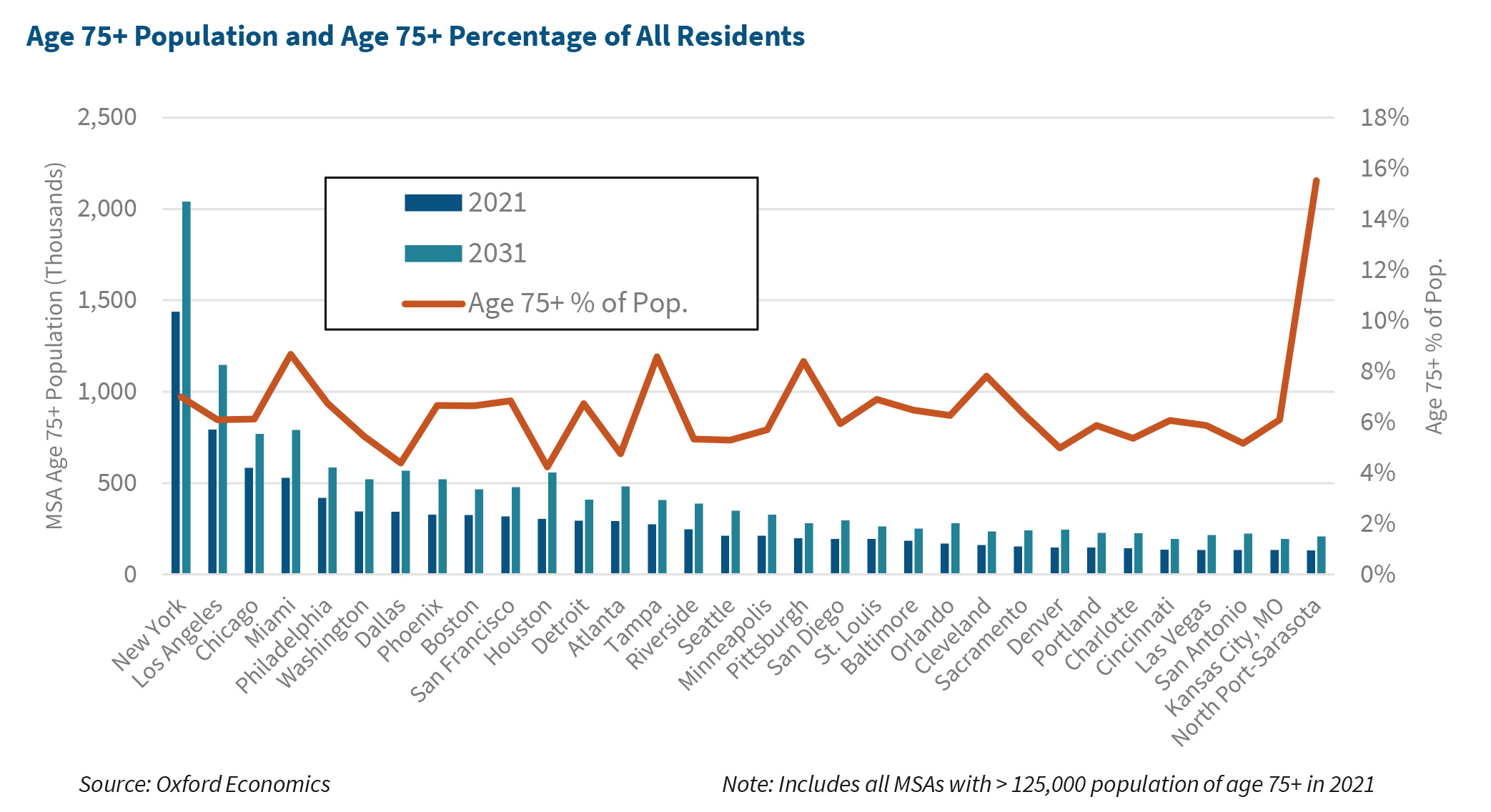 ...As Do Other Large Metros Across the Country

Overall, the 32 metro areas that had more than 125,000 residents aged 75 and older in 2021 accounted for slightly over 41% of the national population in this cohort. While most of these metro areas are not considered retiree havens, they are forecasted to see the same amount of growth in the aged 75 and older population cohort as the rest of the nation over the coming decade.

According to Oxford Economics’ data, 9.6 million people aged 75 and older lived in these 32 metro areas in 2021, and this cohort's population in these metro areas is forecasted to grow by 4.8 million in the next 10 years, growing 4.1% per year annually on average. Similarly, across the entire nation, this population is forecasted to grow by 11.3 million, or 4.0% annually on average.

Many Seniors Do Live in Florida and Arizona...

One kernel of truth in the cliché that senior citizens flock to Florida and Arizona for retirement is that among the more than 360 metropolitan statistical areas in the U.S., the metros with the highest concentrations of people aged 75 and older are all located in Florida and Arizona. As seen in the chart below, The Villages, FL had the highest percentage of its population aged 75 and older at 26.7% in 2021, compared to the national average of just 7.0%. And with the continued growth expected for this cohort in the metro, The Villages is expected to remain the most concentrated metro area for seniors aged 75 and older in 2031, accounting for nearly 36% of the metro’s population.

...And There Are Places Where They Are Scarce

Just as there are metro areas that tend to have an above average number of seniors, there are also metros that have a disproportionally small population of people aged 75 and older. Among the nation’s total metropolitan areas in 2021, Provo, UT had the smallest portion of seniors, at just 3.1%. Overall, just 32 metro areas had population concentrations of residents aged 75 and older of less than 5.0%, as seen in the chart below. And while all these metros are expected to see this cohort increase by 2031, only a handful are expected to increase above the national average for 2021, including McAllen, TX, Flagstaff, AZ, and Fayetteville, NC.

The metros that will likely see well-above average growth of their aged 75+ population cohorts are generally not just the well-established retiree havens. St. George, UT is one such rapidly growing metro area that is forecasted to see its aged 75+ population increase 6.5% each year over the next 10 years, as seen in the chart below. As of 2021, it had 9.5% of its population in the aged 75+ cohort, with that concentration forecasted to rise to a total of 14.3% by 2031. While it is still well below the 35.9% The Villages, FL is forecasted to reach, it will nevertheless be a significant change for the already-rapidly expanding community in St. George.

It is also noteworthy that the metropolitan areas that are forecasted to have the slowest growth of the aged 75 and older cohort are not among the retiree havens. It might have been expected that areas with an already outsized population of people in this age cohort would see slower-than-average growth rates, since the population is already large within the metro area. Instead, Bloomington, IL and Watertown, NY, with concentrations of 5.7% and 5.8%, respectively, are forecasted to have the slowest average annual growth, which is expected to be well below the national concentration of 7.0% as of 2021.

The relatively slow forecasted growth of the Connecticut metros shown above is also worthy of highlight. The Hartford, New Haven, and Bridgeport metropolitan areas stand out among their peers because of their size. The other 12 metro areas shown to the right in the chart above all had estimated populations in 2021 of less than 300,000, while each of the Connecticut metro areas shown above have populations of more than 860,000.

Institutional Seniors Housing – In the Midst of Recovery

The institutional seniors housing sector has had a turbulent few years. At the onset of the COVID pandemic, facilities that housed older Americans appeared to be the epicenter of the virus’ impact on the nation. This resulted in fewer people moving into seniors housing facilities, and the occupancy level for the sector falling dramatically. Indeed, for several years prior to the pandemic, the institutional seniors housing industry was in the midst of a noteworthy expansion, with historically high levels of construction of new inventory underway in nearly all of the nation’s metropolitan areas. The pandemic dramatically interrupted conditions in the sector, but a rebound in the sector began in 2021, which continued into 2022, and the sector has been experiencing a rapid recovery of occupancy, absorption, and rent growth. However, construction activity has been on the decline. Longer term, the rapidly growing population of potential future residents remains on the horizon, and we believe that there will still be an enormous number of people seeking out seniors housing facilities over the next several decades.

According to NIC MAP Vision, as of the third quarter 2022 in its Primary 31 Markets, nearly 34,500 institutional seniors housing units were under construction. But as seen in the chart below, the level of construction new activity had started to slow several quarters before the onset of pandemic. Considering the surge in the size of the senior population that’s expected, the sector may be on the cusp of an unusually high occupancy period, given this lull in development activity.

Furthermore, according to Oxford Economics, 9.5 million people aged 75 and older lived in NIC MAP’s Primary 31 Markets at the end of 2021. In addition, this age cohort is forecasted to grow by 49% in these very markets over the next 10 years. With nearly 689,000 units existing in these 31 markets, that constitutes just a 5% increase in inventory in these markets. While the development of an institutional seniors housing facility takes years to complete, it seems apparent that the seniors housing industry will likely not be growing its inventory at rates approaching the speed its target population will be growing over the forecasted period.

Looking closer at the metro level, several of the NIC MAP Primary 31 Markets could be dramatically undersupplied, and, in turn, some might be modestly undersupplied. As seen in the chart below, Houston is forecasted to have its population of people aged 75 and older grow by a considerable 83% in the next 10 years, while the metro has just 3.0% of its total market inventory underway. San Antonio and Seattle both have a 60+% gap between units under construction and expected future population growth. Another eight markets – Denver, Dallas, Atlanta, Orlando, Las Vegas, Sacramento, Phoenix, and Riverside-San Bernadino – have gaps of more than 50%. Even Chicago, which has the smallest gap between units under construction and its forecasted population growth, has a gap of 28%. With such a significant gap between the units under construction and the expected growth of the cohort that could benefit from this type of seniors housing, it appears very likely that the sector will not be able to meet possible future demand.

The Expansion Has Begun and the Housing Sector Needs to Adapt

The nation’s aging transformation shift has begun and will continue over the several decades. As an unprecedented proportion of the population will enter the aged 75 and older cohort, there will likely be broad (and, in many cases, uncertain) impacts that will drive the nation's economy and demand for housing for years to come. This demographic shift will be experienced across the country, although it will be felt more acutely in some places than in others. Indeed, many of the nation's major metropolitan areas will be experiencing a never-before-seen surge in their senior populations and will have to adapt to a populace that has different needs than they do today.

These changes in the composition of the population will have significant impact on the nation’s housing markets, both single-family and multifamily. A change in the demand for housing our senior population is coming, and it’ll likely take many forms: Whether it’s the ability of seniors to access equity in their owned homes to make renovations and improvements that allow them to age in place; the opportunity to sell their home and move to a more hospitable and less expensive locale, including particular types of seniors housing communities; or a multifamily property owner with an aging resident base that needs to make unit changes and accommodations. Right now, it looks like there’s a long road ahead to meet that changing and diverse demand.