A Slight Increase In the Supply of New Manufactured Housing Communities

Manufactured housing pre-fabricated in factories remains a source of unsubsidized affordable housing, with an estimated 6.8 million units housing those who either own or rent a unit, according to data from the 2019 American Community Survey (ACS).

However, not all purchasers of these pre-fabricated homes can afford to purchase the land needed for their new home, and some prefer to avoid the maintenance associated with owning that land. That’s where a Manufactured Housing Community (MHC), also known as a land lease community, comes into play. These communities can also have a limited number of homes available for rent. For those residents who own their home, these communities offer pad sites for rent, which are spaces where owners can place their homes that also provide access to utility hookups.

According to information from Datacomp Appraisal Systems, Inc., as of second quarter 2022, there were an estimated 43,300 MHCs providing land for lease or rental of both the pad site and the home. However, relatively few MHCs have been built in recent years. While this trend appears to be reversing, we believe limited supply will likely keep pad site vacancies at existing MHC relatively low.

As shown in the map and chart below, there were an estimated 18 new MHCs under construction, representing just over 2,800 pad sites as of mid-August 2022, according to data from CoStar, Inc. While this is double the number that was under construction five years ago, it represents just a fraction of new MHCs that were produced 20 years ago. For a sense of scale, there are just under 800,000 new multifamily rental units under construction that are expected to be delivered over the next two years.

Of the MHCs under construction where the type of community is identified, three of the MHCs are Seniors communities, targeted to those residents aged 55 or older that may prefer to own their home but lease their pad site to leave maintenance and upkeep to a minimum. This includes Lavender Meadows Park near Seattle, which will contain an estimated 217 sites when completed. Another 12 MHCs under construction are considered All Ages communities, meaning that there is no minimum age requirement for residents.

As shown in the map below,  the new MHCs are in a handful of states, including California, Florida, Tennessee, Washington, North Carolina, and Virginia. This is consistent with areas of the country that, historically, have been more open to factory-built homes. These states contain counties that can have more than 50 MHCs.

Handful of Counties With a Lot of MHCs

According to Datacomp, most counties have at least one MHC. However, a small subset of counties have 50 or more communities, as shown in the map below. In fact, the top 60 counties for MHCs contain just under a quarter of all communities.

Six of the top 11 counties for MHCs are in California. These include Los Angeles with over 600 MHCs, San Diego with 425 MHCs, Riverside and San Bernardino each with over 350 MHCs, and Kern and Orange county each with about 220 MHCs. Another four are in Florida, including Hillsborough and Polk counties, each with about 470 MHCs, and Pinellas and Pasco counties, each with over 270 MHCs. These four counties include the cities of Tampa, St. Petersburg, and Clearwater. Arizona also has several counties with at least 190 MHCs, including Maricopa and Pinal counties in Phoenix and Pima county, which includes Tucson. 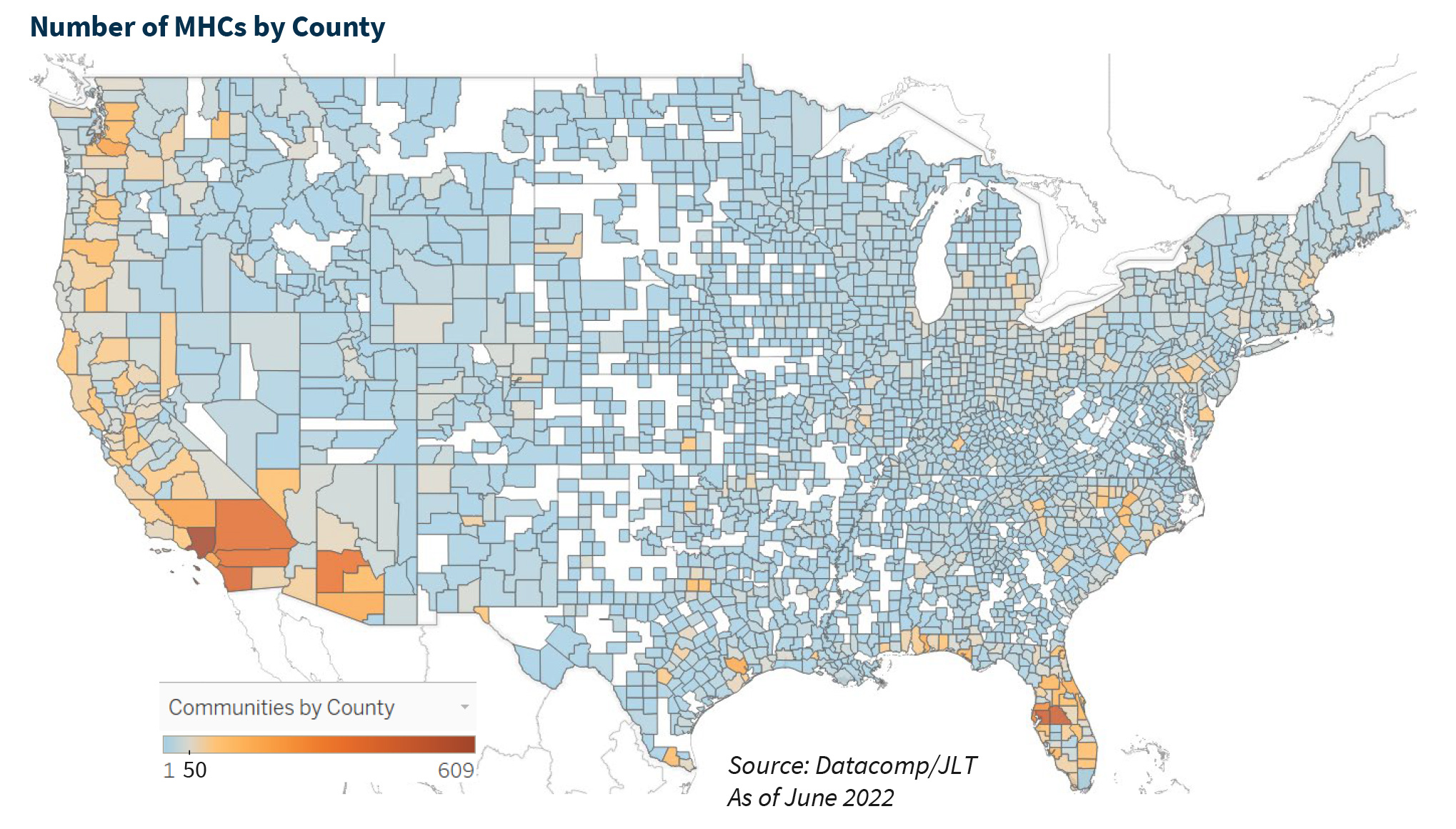 According to MSCI Real Assets (MSCI), sales of MHCs totaled an estimated $8.0 billion in 2021. As shown in the lower left chart, this is the highest volume recorded in the last five years. CoStar also recorded a similarly high level, with an estimated $9.4 billion in sales in 2021. This elevated sales volume was likely due to a combination of factors, including MHC property owners who withheld properties from being sold during the height of the pandemic, instead waiting to sell when there was less market volatility. In addition, we believe investors became more interested in MHCs in 2021 after realizing that demand fundamentals for MHCs had remained positive during the pandemic.

Sun Belt Metros Record Some of the Highest Sales in 2021

Given the counties with the highest concentration of MHCs, it’s no surprise that the metros with the highest total sales volume over the past four quarters were Phoenix and Los Angeles. As seen in the chart above, investors spent about $350 million to acquire MHCs in Phoenix and Los Angeles according to MSCI. Investors spent another $230 million each in Sarasota and Tampa.

However, investor interest in MHCs has grown beyond the Sun Belt. Investors acquired just over $230 million in MHCs in Chicago, making it one of the top metros for investment in MHCs over the past year.

As mentioned earlier, there are two types of MHCs:  All Ages communities and Age 55+ communities. Age 55+ MHCs, as the name implies, are targeted to older adults. All Ages MHCs tend to attract families and residents of all ages, including those older adults that do not want to live in an Age 55+ community. Fundamentals in both segments of MHC appear to have weathered the pandemic and the inflationary economy across all regions of the country so far.

Some older residents prefer purchasing homes in Age 55+ MHCs for the ease of maintenance and enjoyment of the amenities that are usually offered. This trend has not changed over the past several months, despite the high inflation rates recorded recently. Nationally, the occupancy rate in Age 55+ MHCs increased by 0.7 percent year-overyear to 97 percent as of second quarter 2022, as shown in the table below. Further, all six regions tracked by Datacomp saw slight increases in occupancy.

With occupancy rates of 98 percent or higher, Age 55+ MHCs in the Northeast and Pacific regions of the country had the highest occupancy rates as of second quarter 2022 among the six regions tracked by Datacomp. The South and Southwest regions had average occupancies of 96 percent, with the West and Midwest regions recording occupancies of 94 percent and 93 percent, respectively, as of the end of second quarter 2022.

As shown above, pad site rents vary widely among regions. The Pacific region, which is comprised of the high-cost coastal states of California, Oregon, and Washington, has the highest monthly pad rent at $809 per month, as of second quarter 2022 according to Datacomp. As might be expected, the large Midwest region, which is comprised of 12 states including Michigan, Illinois, and Indiana, had the lowest average pad rent at $529 per month.

Pad site rents in each region grew across all regions by an average of 4.9 percent year over year as of second quarter 2022, far below the 9.1 percent non-seasonally adjusted inflation rate and 11.2 percent average national increase in apartment rents. Pad rents in the Southern region, which consists of 13 states, including Florida, Georgia, and the Carolinas, recorded the highest growth at 6.1 percent year over year, bringing its regional monthly pad rent to $629. Pad rents in the Northeast region, which is comprised of seven states including Pennsylvania, New York, and New Jersey, recorded a lower growth rate of 3.7 percent year over year, bringing its monthly pad rent to $536.

Despite ongoing delays in the delivery of new homes due to stubbornly persistent supply chain disruptions, MHC occupancies remained steady or tightened in All Ages communities in the six regions tracked by Datacomp.

Pad Site Rent Can be Lower In All Ages MHCs

Pad site rents are highest in the Pacific region, growing by 3.4 percent year over year to an average of $947 as of second quarter 2022.  Pad site rents were lowest in the Midwest, growing during the quarter by 4.7 percent to $465 per month on average. This is also lower than the $529 per month recorded at Age 55+ MHCs.

With fewer than 20 new MHCs under construction, coupled with ongoing interest from investors, capitalization rates for institutional-quality MHCs have declined significantly in recent years. According to MSCI Real Assets (MSCI), the average cap rate for MHC property sales fell from  an average of 6.8 percent in second quarter 2013 to an estimated 4.7 percent as of second quarter 2022, as shown in the chart below. While more volatile, CoStar data also shows cap rate  compression, with the average cap rate for MHCs falling from 10.0 percent to 6.5 percent over the same time frame. 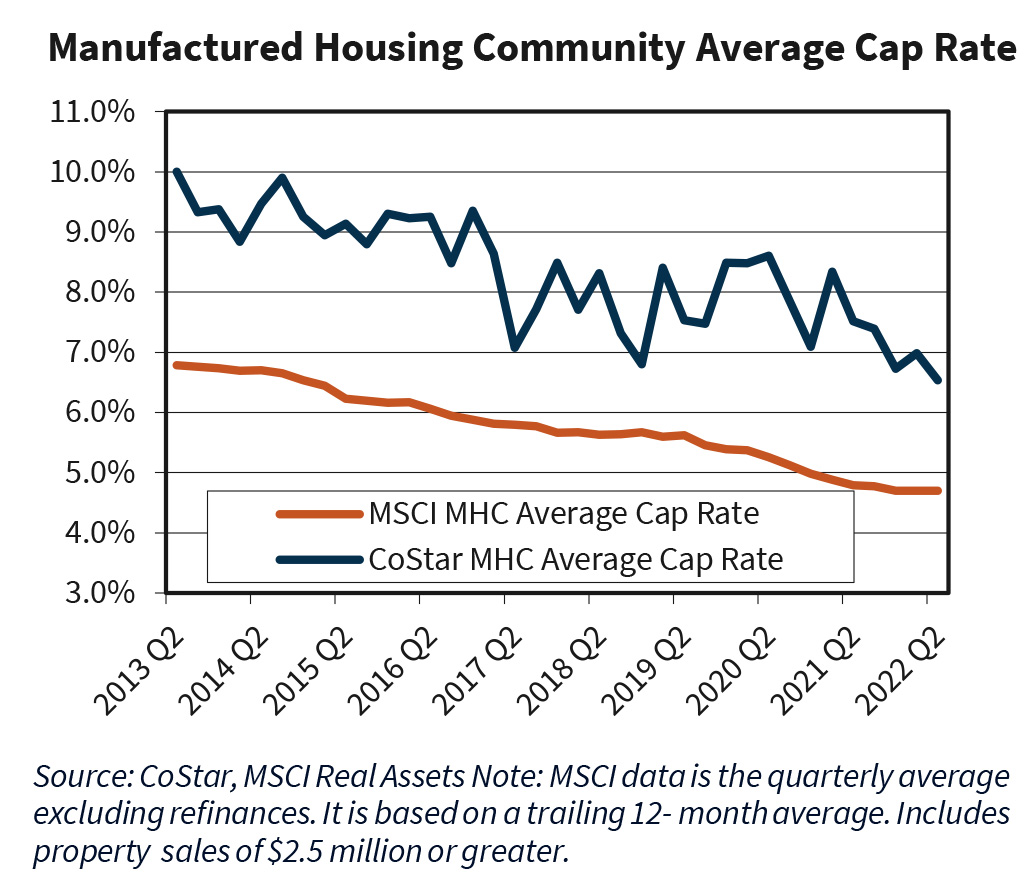 According to data from MSCI, MHC sales prices per pad site totaled an estimated $77,000 per pad, as of second quarter 2022. While pad site prices can be somewhat volatile, there has been an upward trajectory recently. Since first quarter 2020, the price-per-site has increased an estimated 38 percent. This is consistent with the 33 percent increase in price-per-unit of sales of multifamily properties over the same time period.

MHCs are far less expensive to purchase than multifamily properties. The average MHC price-per-site as of second quarter 2022 was only a third of a traditional multifamily property price-per-unit of $233,000, likely reflecting the fact there is far less maintenance with an MHC than an apartment building.

As shown in the adjacent chart, after a strong 2021 where the Commercial Mortgage-Backed Securities (CMBS)sector financed about $3.7 billion in MHC loans, it appears that the sector is back to more normalized levels, at least as of the first half of 2022. As an example, in 2021, an affiliate of Brookfield Asset Management secured $2.2 billion to refinance a portfolio of 124 U.S. MHC properties located across 13 states. However, the CMBS conduits financed just $200 million in the first half of 2022.

As shown in the chart below, Fannie Mae financing of MHCs increased in 2020 but has returned to pre-pandemic levels recently. Fannie Mae financed $3.3 billion of lending on MHCs in 2021 and has financed $1.5 billion through second quarter 2022. 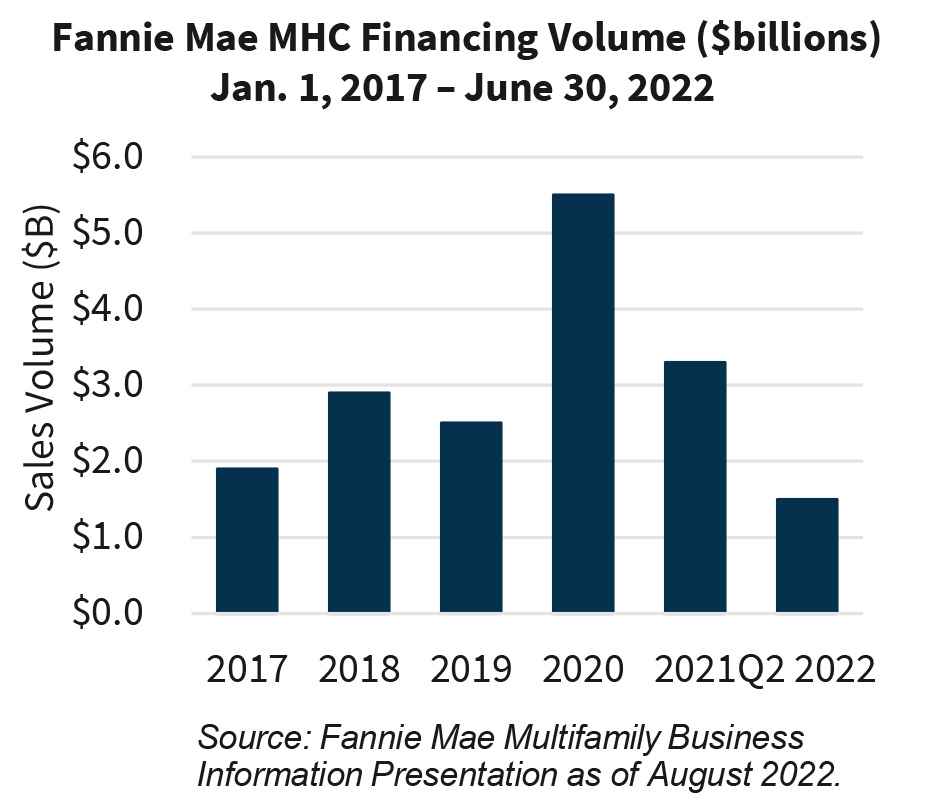 ...That Have Performed Well

As of second quarter 2022, Fannie Mae had financed  1,700 MHC loans with a total unpaid principal balance of just over $19 billion. This represents an estimated 5 percent of Fannie Mae’s multifamily guaranty book of business, on par with the shares of Student and Seniors housing.

According to the U.S. Census Bureau’s Manufactured Housing Survey, an estimated 106,000 new manufactured or pre-fabricated homes shipped from factories in 2021 with an additional 62,000 homes shipped through June 2022. Some of the homes shipped were purchased by residents who rent the pad site in a community where their home is going to be located, and some others shipped to communities that rent out both the home and the pad site. While generally a third of new manufactured homes ship to MHCs each year, this figure jumped to 51 percent in 2021. However, the creation of new communities is still extremely limited, with less than 20 new communities under construction as of second quarter 2022. Right now, the level of construction appears insufficient to keep up with the increasing demand for this type of housing. 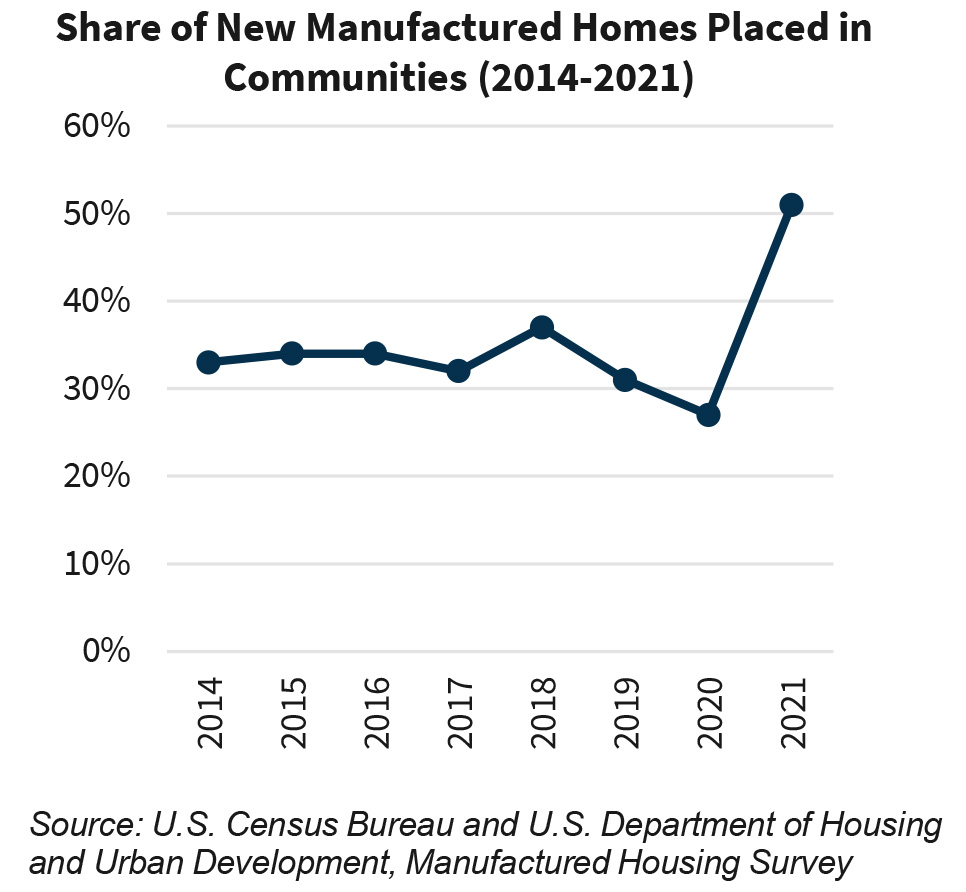