Starts for new multifamily rental and condominium construction have continued at historically high levels in 2022, though the levels of the first half of the year are down modestly from the record levels achieved in mid2021, according to the Dodge Data & Analytics Supply Track construction pipeline. As shown in the chart below, although the total number of new apartment rental units started in the first half of 2022 increased 6.5% from the same period of 2021 to approximately 277,000 units, the number of units started each quarter has been in decline since the second quarter of 2021, when it peaked at 149,000 units. It has since declined each quarter, with an estimated 139,000 units started in the second quarter of 2022. Revised data for the full year of 2021 show apartments units started increased significantly in 2021, rising 27% from 2020 starts to 541,000.

The Census Bureau’s estimated multifamily starts has averaged 555,000 units for the first half of 2022, which includes condominiums and two- to four-unit properties. This is a remarkable increase compared to the 461,000 units started during the first half of 2021, which itself was a sizable rebound from the onset of the pandemic. We forecast that multifamily starts will increase by slightly less than 6% in 2022 from the prior year, rising to 502,000 units. While the level of supply continues to be visibly robust, overall starts remain well below the extraordinary levels achieved in the 1970s when Baby Boomers were reaching peak apartment rental age – more than 1 million units were started in 1973. 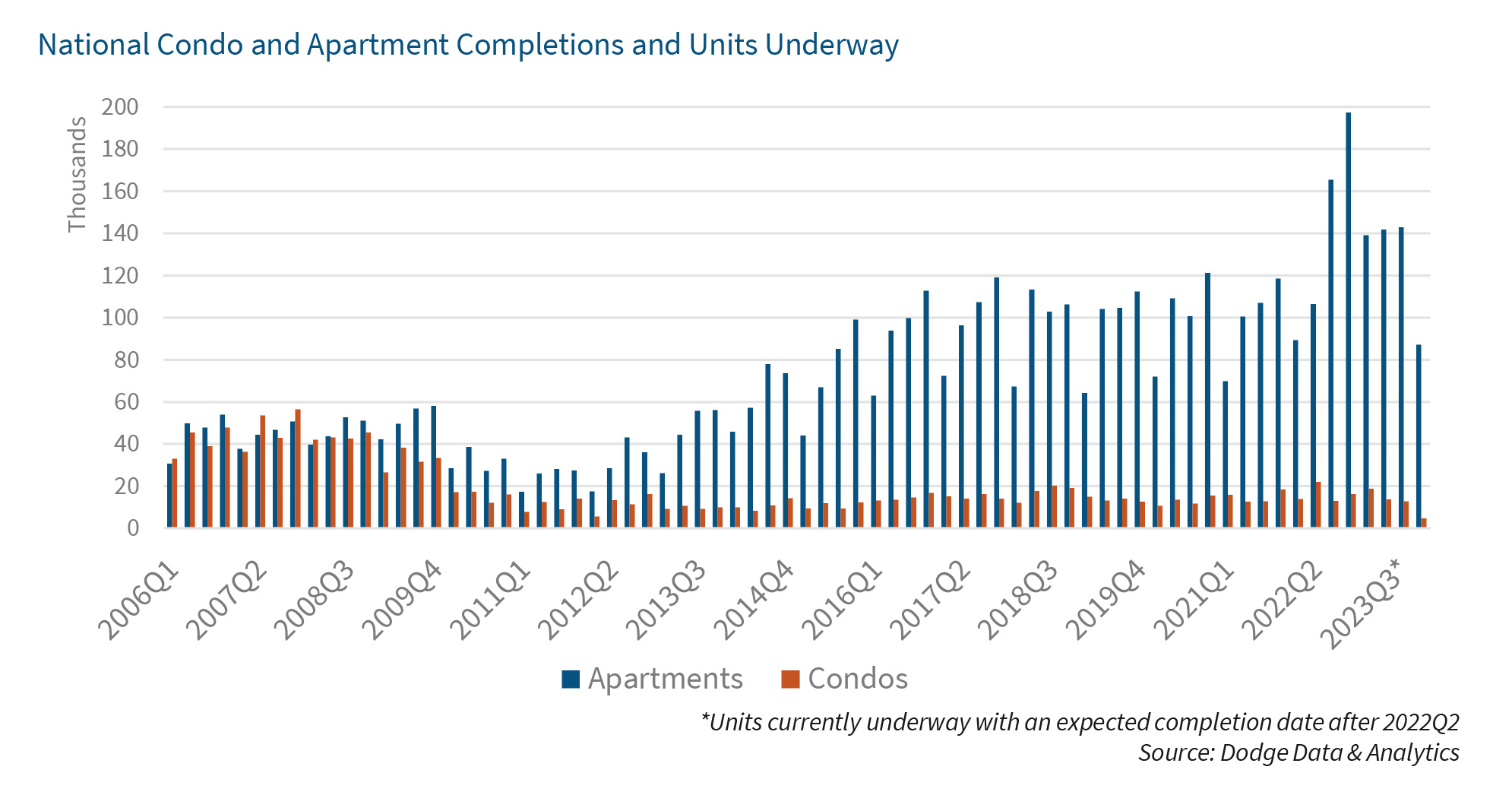 Class A and Major Metros Remain Focus of Developers

Multifamily rental development continues to be concentrated in the largest metros in the country, as seen in the below. New York remains the most active metro in the country, with more than 130,000 units either recently completed or underway. Washington, DC, is in second place with over 66,000 units. Dallas and Austin have over 62,000 and 57,000 units, respectively, underway or recently completed. Los Angeles, Seattle, Houston and Atlanta are close behind with each having more than 43,000 units underway, while Phoenix and Orlando round out the top 10.

While much of the current development underway is concentrated in the largest metros, in most metros it is further concentrated in only a few submarkets, particularly in more dense and urban-focused submarkets. Additionally, most units being developed are more expensive, Class A-type apartment units. While these type  of submarkets and units were the first to experience rising vacancies at the onset of the pandemic in 2020, they also saw a sustained recovery in 2021 and 2022. For example, CoStar is expecting Class A unit rents to see the highest level of rent growth among the apartment classes in 2022, forecasted at 6.9% for Class A, though that would be down from the unsustainable 14.7% growth seen in 2021.

Also noteworthy is the continued absorption of recently constructed Class A units without significant market disruption. Class A concession levels remain higher than those for Class B and C units, but according to RealPage, just 6.9% of all Class A units across the country are offering concessions as of June 2022, which is a notable decline from 12.5% in June 2021. 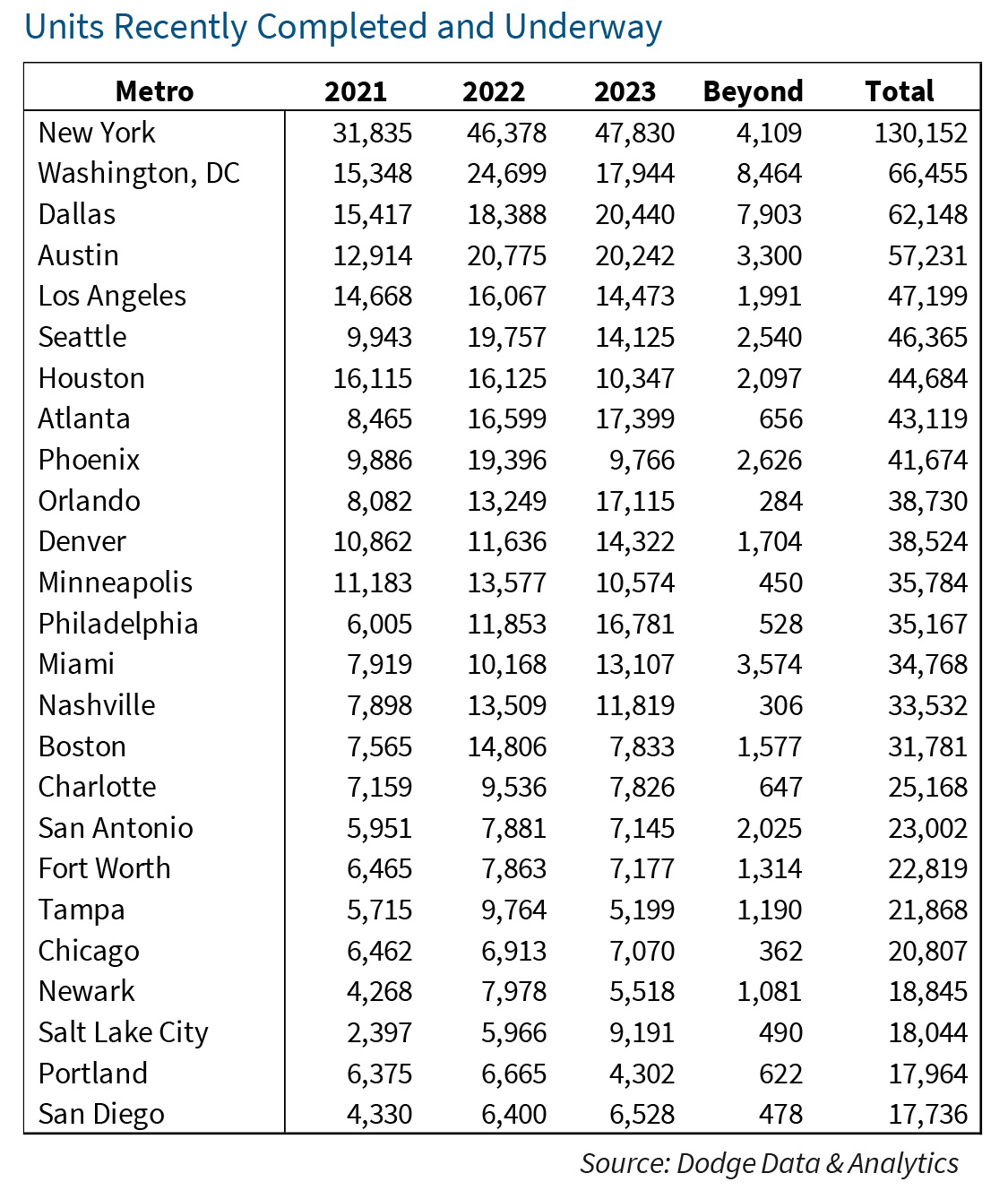 Despite worldwide disruptions to supply chains that have impacted development activity, the multifamily industry continues to see elevated levels of new construction. Fortunately, the industry also continues to experience solid absorption, due to the ongoing rebound from pent-up demand coupled with the long-term national housing shortage. While rent and vacancy fundamental measures were already likely to ease from their recent exceptional growth, continued deliveries of new units may push some metro areas to see supply-driven increases in their vacancy rates over the next 12 months. Additionally, the more expensive Class A segment may see a more enhanced softening of its vacancy rates, as the overall market eases and the multi-year ongoing surge of development is almost entirely comprised of these types of units. Despite this softening, we expect the overall multifamily sector to remain stable as the nation needs much more housing to satisfy the needs of the growing population.