The vast majority of apartments at LIHTC properties are rented to residents earning a maximum of 60% AMI. However, maximum rent levels are set by HUD; therefore, federal stimulus payments and emergency rental assistance were able to go further at LIHTC properties during the pandemic. In addition, some of the strongest wage growth seen in recent years also helped renters at LIHTC properties pay rents more easily.

Strong Uptick in Sales in 2021

A significant portion of the portfolio sales in 2021 came from Blackstone Real Estate, which recently launched an affordable housing company called April Housing. In 2021, BREIT closed on a $7.9 billion acquisition from American International Group (AIG) involving approximately 80,000 units across more than 650 LIHTC properties nationwide. In addition, CoStar recorded that BREIT paid an estimated $2.7 billion for 44 Florida LIHTC properties from Cornerstone Property, bringing about 90,000 units to April Housing. More importantly, April Housing has stated it plans to invest $500 million in the properties over the next decade.

Cap rates for LIHTC properties did not appear to be impacted by the pandemic-induced recession. As shown in the chart below, the average cap rate at LIHTC properties has declined by 1.0% since 2019 to 5.5% as of first quarter 2022. This is consistent with increased investor interest in this asset class. 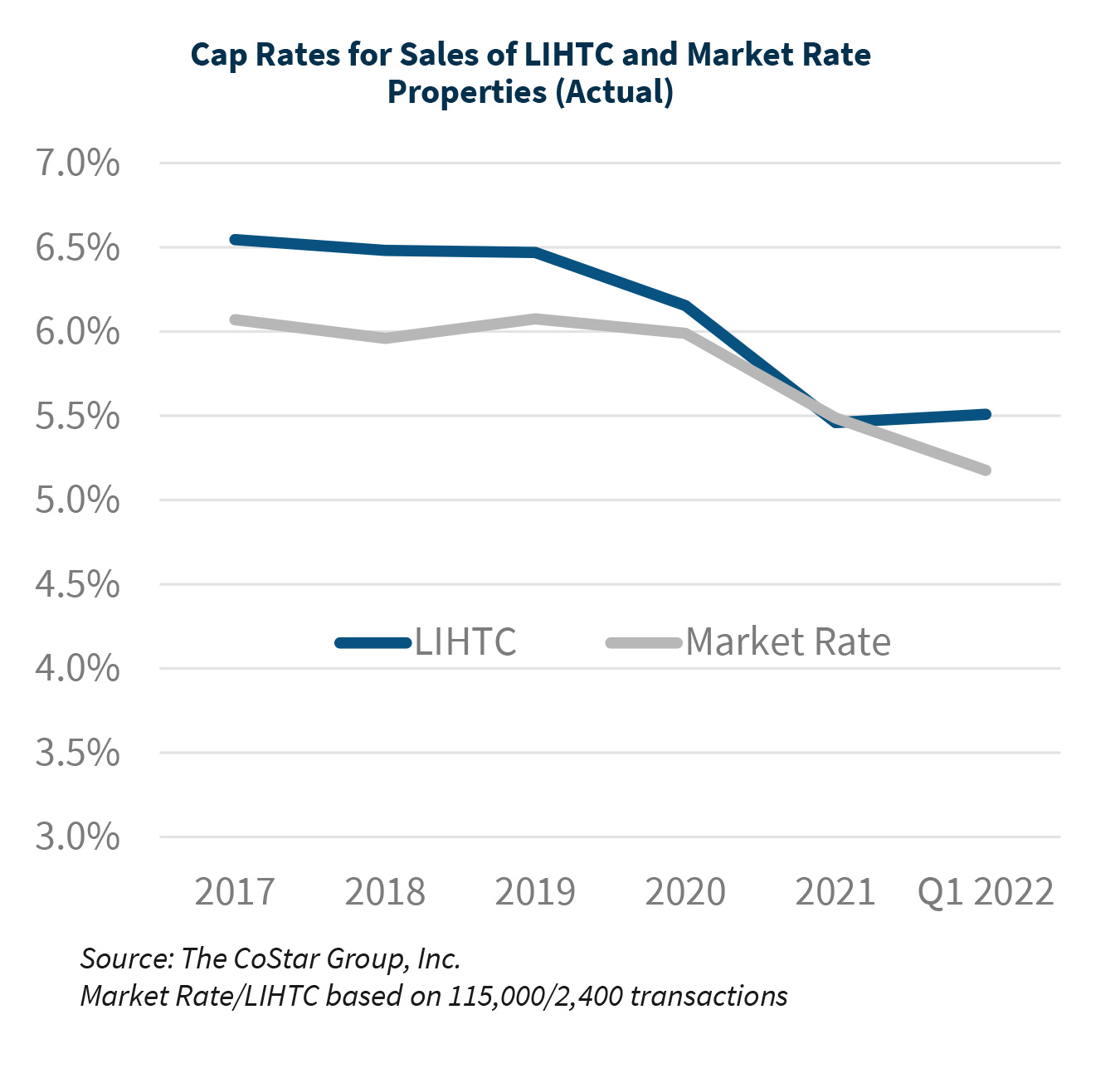 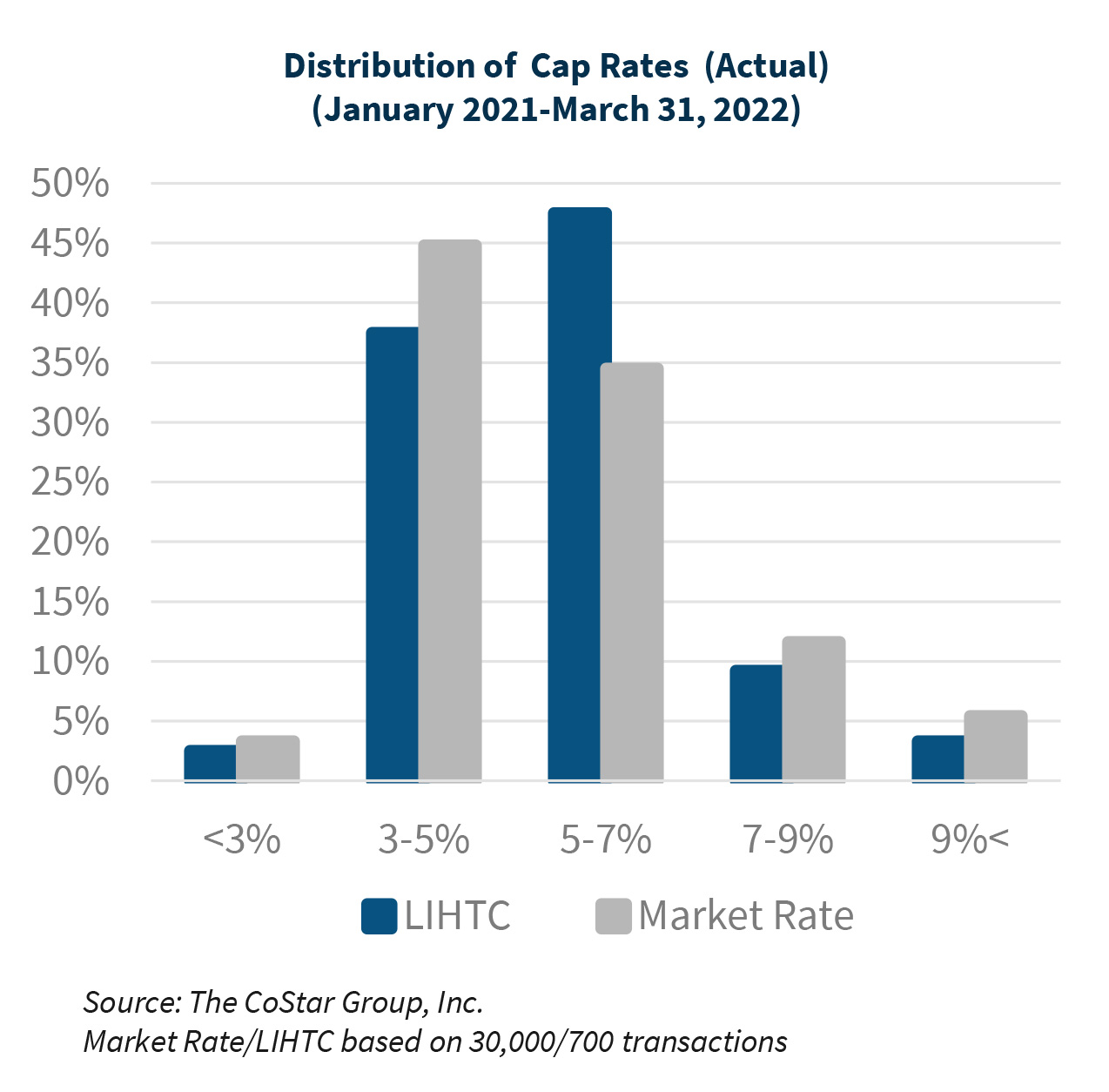 Given the ongoing affordability crisis and continued investor interest in this asset class, it is crucial for the LIHTC program to place as many new units into service as possible. As shown in the upper left chart below, an estimated 3.4 million units have been placed in service in just over 50,000 properties since the inception of the LIHTC program in 1987. According to the most recent release of the HUD LIHTC database as of April 2022, which includes units placed in service through 2020, approximately 3.0 million of these units in almost 42,000 properties remain in service. 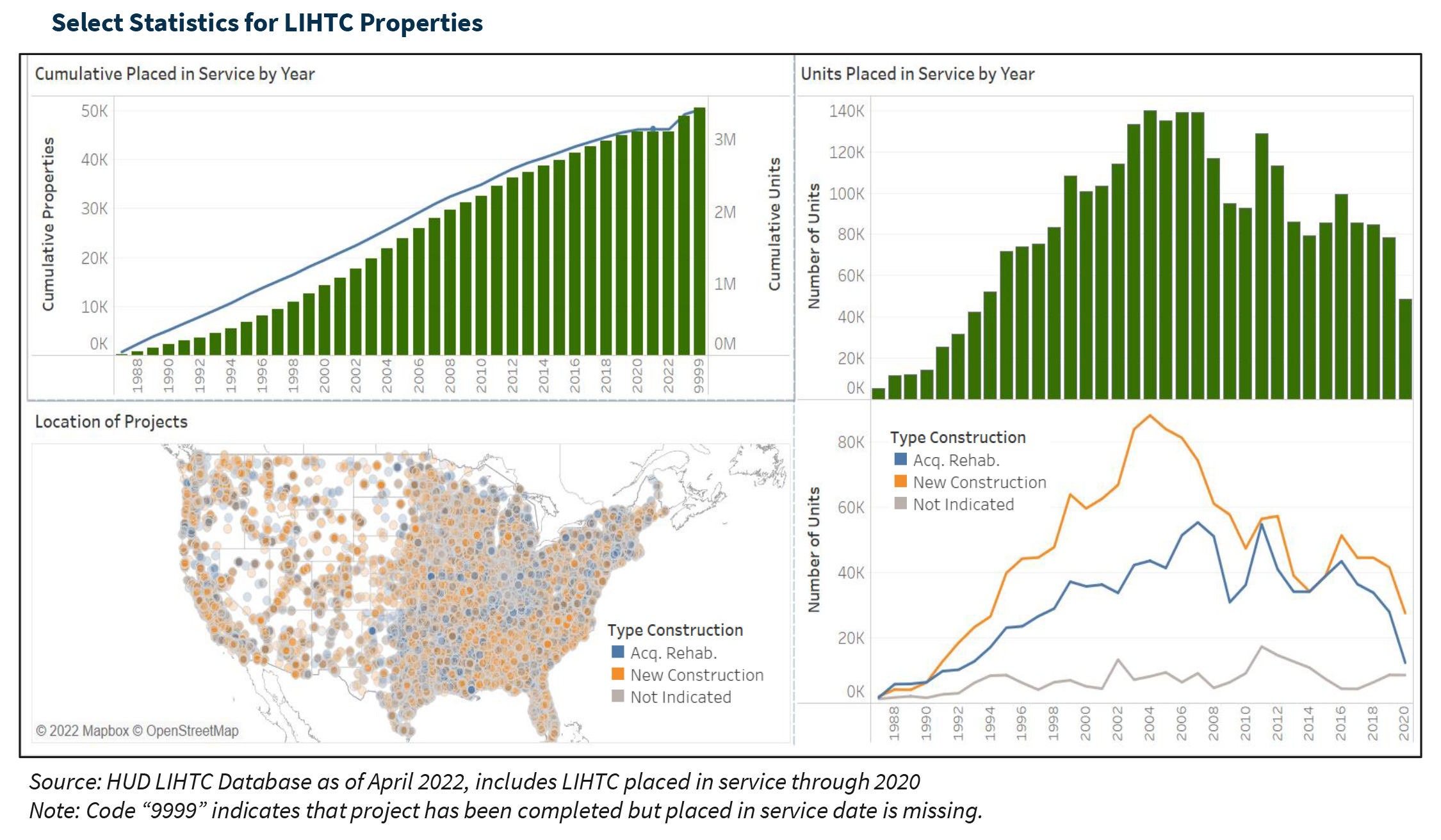 …But At A Slower Pace…

The number of new LIHTC units placed in service annually appears to have slowed in recent years, as shown in the upper right chart above. For instance, in the five years prior to the Great Recession, which started in December 2007, just under 137,000 units were placed in service on average annually. In contrast, after the Great Recession, from 2010 to 2019, the last year for which the HUD LIHTC database has relatively complete data, fewer than 100,000 new units were placed in service on average annually. While part of the decrease may be due to a lag in reporting, high construction costs also had a negative impact on the production of affordable units.

…as New Construction Has Declined

This downward trend is consistent with the findings of a recent Terner Center Report, The Costs of Affordable Housing Production: Insights from California’s 9% Low-Income Housing Tax Credit Program, which showed that total development costs have risen dramatically in California since 2008. The report found that the average cost per unit of 9% LIHTC new construction increased from $411,000 to $480,000, an increase of over 17% from 2008 to 2019. The cost per square foot has grown even more dramatically, from $451 per square foot in 2008 to $700 per square foot in 2019, an increase of 55%. The report concluded that, in broad terms, the same amount of public subsidy is now needed to build two units at 1,000 square feet as was needed for three units just 10 years ago.

While the Terner Center study took place in California, this increase in costs appears to have played out across the country. As shown in the left chart below, as the number of units completed annually at new market-rate properties has tripled since 2012 to almost 330,000 units, the number of new units completed at LIHTC properties appears to have fallen below 60,000 annually in recent years. As a result, only about 15% of new units under construction in recent years have been affordable, compared to about a quarter of new units prior to the Great Recession.

While developers have been able to increase the number of units at new market-rate properties substantially in recent years, it has come at a cost to renters. The average rent at a market-rate apartment has risen by 30%, almost $400, over the past six years to an estimated $1,640 in 2021, according to Moody’s Analytics CRE. In contrast, the average asking rent at an affordable unit at a LIHTC property has risen by about $150 over the same time period, representing a 17% increase. LIHTC rents were at 67% of market rents in 2015 but dropped to just 60% of rents by the end of 2021. The differences are even greater at the metro level.

LIHTC Rents Substantially Lower than Market Rents in Some Metros

As might be expected, LIHTC rents are most affordable in major coastal cities. For instance, in San Francisco, Boston and Northern New Jersey, the average asking rent for LIHTC units as of fourth quarter 2021 was 53% or less of market rent. However, as rents at market-rate properties have risen sharply over the past year, more traditionally affordable markets are also seeing a significant advantage in LIHTC rents. For instance, as shown in the chart below, Allentown, Tampa, Orlando, and Charlotte all recorded rents at LIHTC apartments that are just 58% or less of market-rate rents. 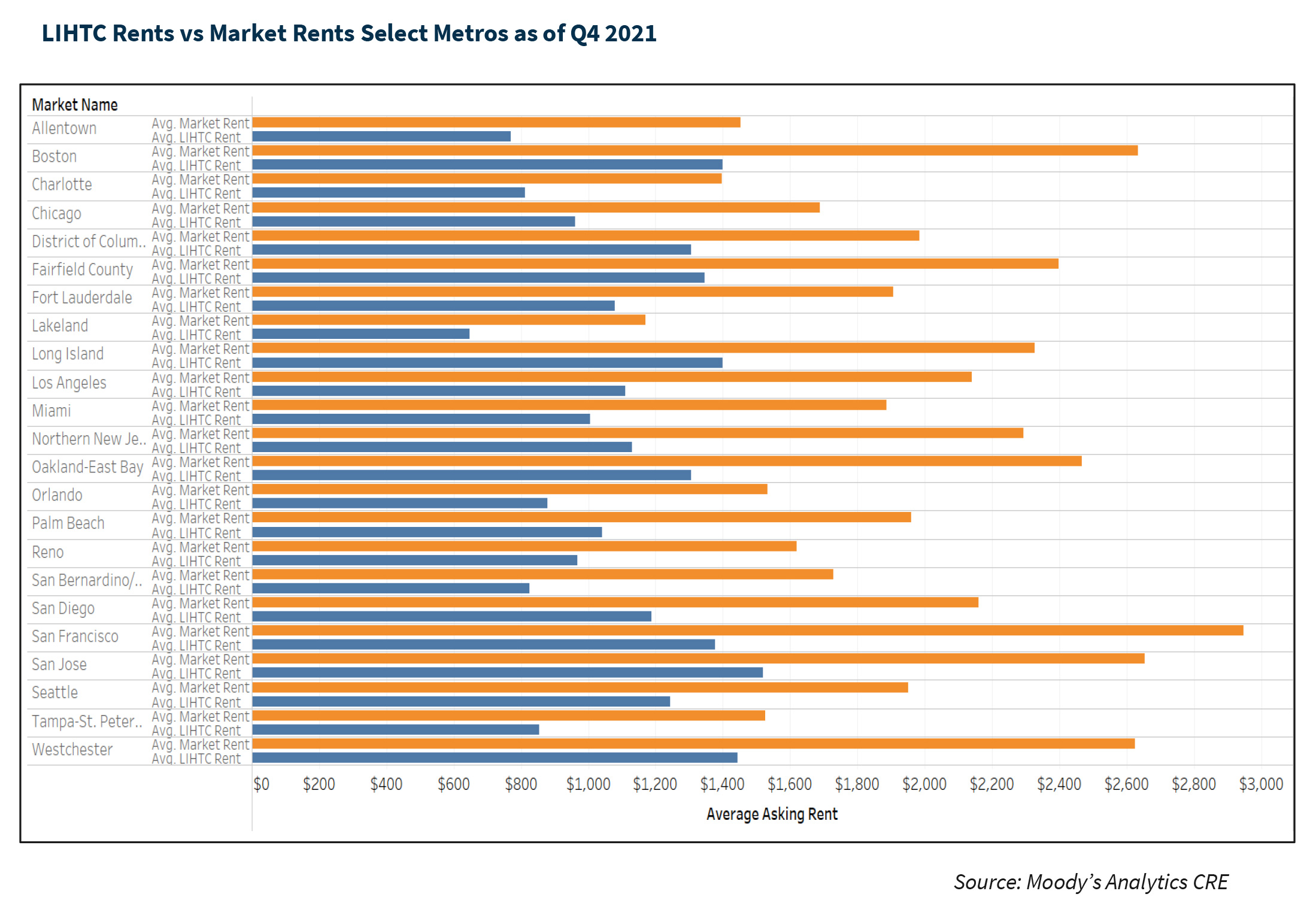 Even when comparing more affordable Class B/C units to LIHTC units, LIHTC rents can be substantially more affordable, as shown on the chart below. For instance, in Oakland, Los Angeles, Miami, and Boston average asking rent for LIHTC units as of fourth quarter 2021 was 63% or less of market rent. However, as Class B/C rents have also risen by almost 20% in some metro areas over the past year, even more traditionally affordable markets are also seeing a significant advantage in LIHTC rents over Class B/C rents. For instance, Orlando, Tampa, and Fort Lauderdale all recorded rents at LIHTC apartments that are about 70% or less of market-rate rents. 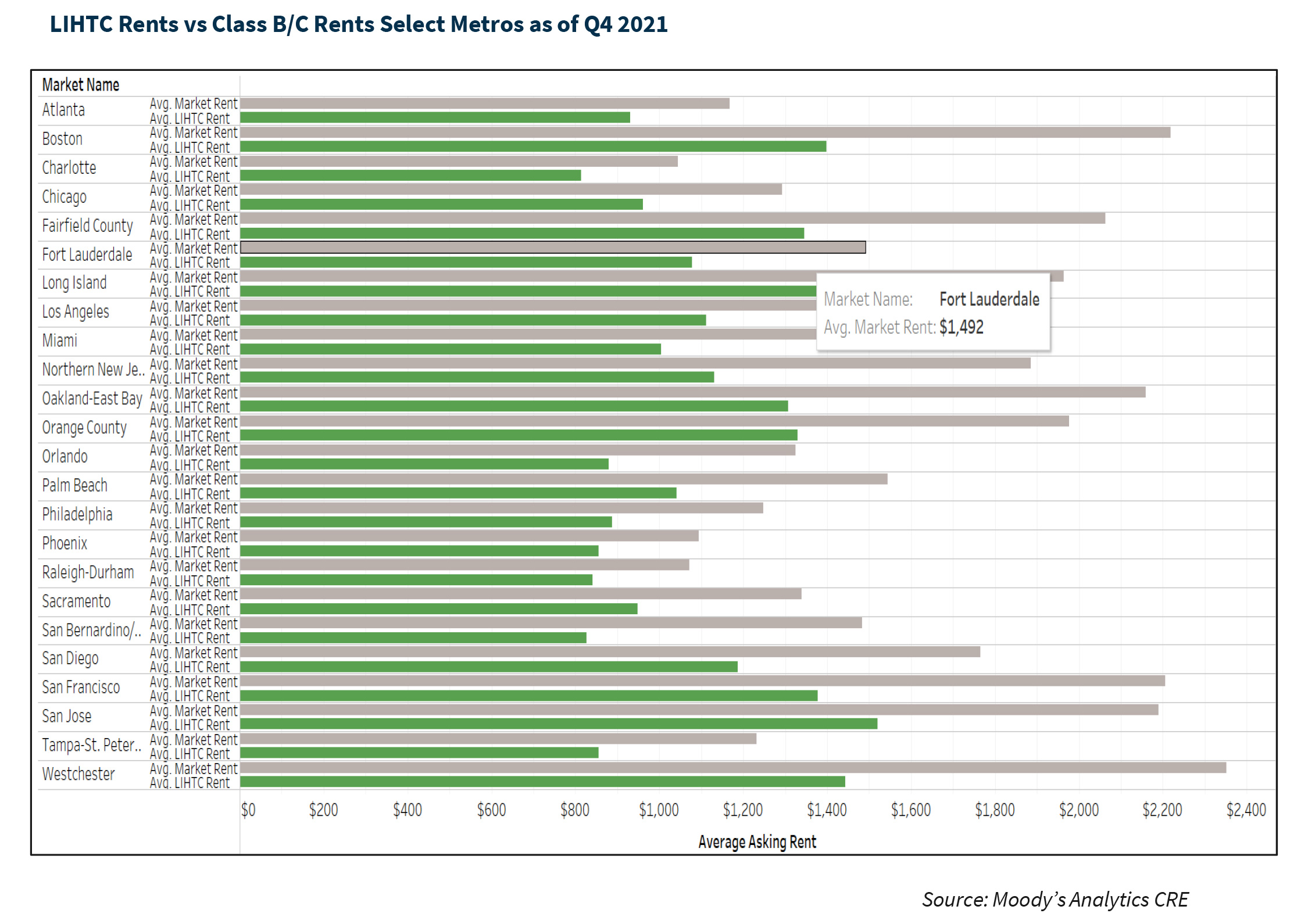 According to the National Low Income Housing Coalition’s 2022 The Gap report, there are only 58 affordable and available rentals for every 100 renter households earning 50% AMI. These are the renters targeted by the LIHTC program. However, the LIHTC program faces many challenges. Construction costs are rising, so it is more costly to build new affordable LIHTC properties. In addition, the temporary 12.5% increase in the amount of 9% credits implemented by the Tax Cuts and Jobs Act enacted in December 2017 expired in 2021. Further, the 4% floor for 4% LIHTC credits will be less valuable in the current environment of rising interest rates, and some states have reached the cap on their private activity bond allocations. Despite these challenges, interest in the multifamily affordable asset class is growing, showing that more private capital could flow to affordable segments.

Opinions, analyses, estimates, forecasts, and other views of Fannie Mae’s Economic and Strategic Research (ESR) Group included in these materials should not be construed as indicating Fannie Mae’s business prospects or expected results, as they are based on a number of assumptions, and are subject to change without notice. How this information affects Fannie Mae will depend on many factors. Although the ESR Group bases its opinions, analyses, estimates, forecasts, and other views on information it considers reliable, it does not guarantee that the information, estimates or forecasts provided in these materials is accurate, current, or suitable for any particular purpose. Changes in the assumptions or the information underlying these views could produce materially different results. The analyses, opinions, estimates, forecasts, and other views published by the ESR Group represent the views of that group as of the date indicated and do not necessarily represent the views of Fannie Mae or its management.