Demand for multifamily plummeted during the fourth quarter of 2022, after having been at above-average levels earlier in the year. It appears that rental demand has been negatively impacted by persistent inflation pressures, diminished savings levels of many households, and ongoing recession expectations. Indeed, we are still projecting a moderate recession for the first half of 2023, and, as a result, we are expecting lower-than-normal rent growth this year along with a higher national vacancy rate. However, due to elevated mortgage rates and the overall national shortage of housing, we believe that many renters will not move into homeownership in the near term, keeping multifamily fundamentals subdued but somewhat stable over the second half of the year.

That said, the national multifamily vacancy rate is expected to slowly rise in 2023, from an estimated 5.5 percent as of fourth quarter 2022, to an estimated 6.0 percent by year-end 2023, as illustrated in the chart below, and then begin to stabilize at 6.25 percent further out in the forecast in 2024. The pace of absorption is expected to slow significantly this year due to the elevated number of new units delivering over the next 12 to 18 months. In addition, we expect that more units will offer concessions, and that those concession levels will increase slightly during the first half of the year, as rental demand remains lackluster.

Demand Expected to Slow in 2023

Demand for multifamily rental units was robust during much of 2022 but then dissipated during the last three months of the year. According to data from RealPage, multifamily demand was estimated at 661,910 units at the end of 2021, compared to an estimated 303,031 units in 2020. But by year-end 2022, demand had turned negative, at -103,485 units. In addition, RealPage is anticipating that demand will remain negative in early 2023, with an estimated -80,049 units, but then end 2023 with a positive 492,862 units of multifamily demand.

We expect the national multifamily vacancy rate to rise in 2023, primarily due to the amount of new supply expected to deliver over the next 12-18 months this year, just as the economy likely enters a recession and job growth turns negative. Much of this new supply consists of more expensive, class A units in many places, and with elevated mortgage rates and fairly high single-family home prices in many locations across the country, we believe it may result in keeping some renters renting for awhile longer. Nevertheless, we expect that the amount of new supply completing over the next 12 months will push the national vacancy rate up to 6.0 percent in 2023. It is important to note that remaining at this level is a return to the most recent estimated vacancy peak of 6.0 percent that occurred in first quarter of 2021, as seen in the chart below, and is only slightly above the long-term average of 5.8 percent from 2005 through 2022. 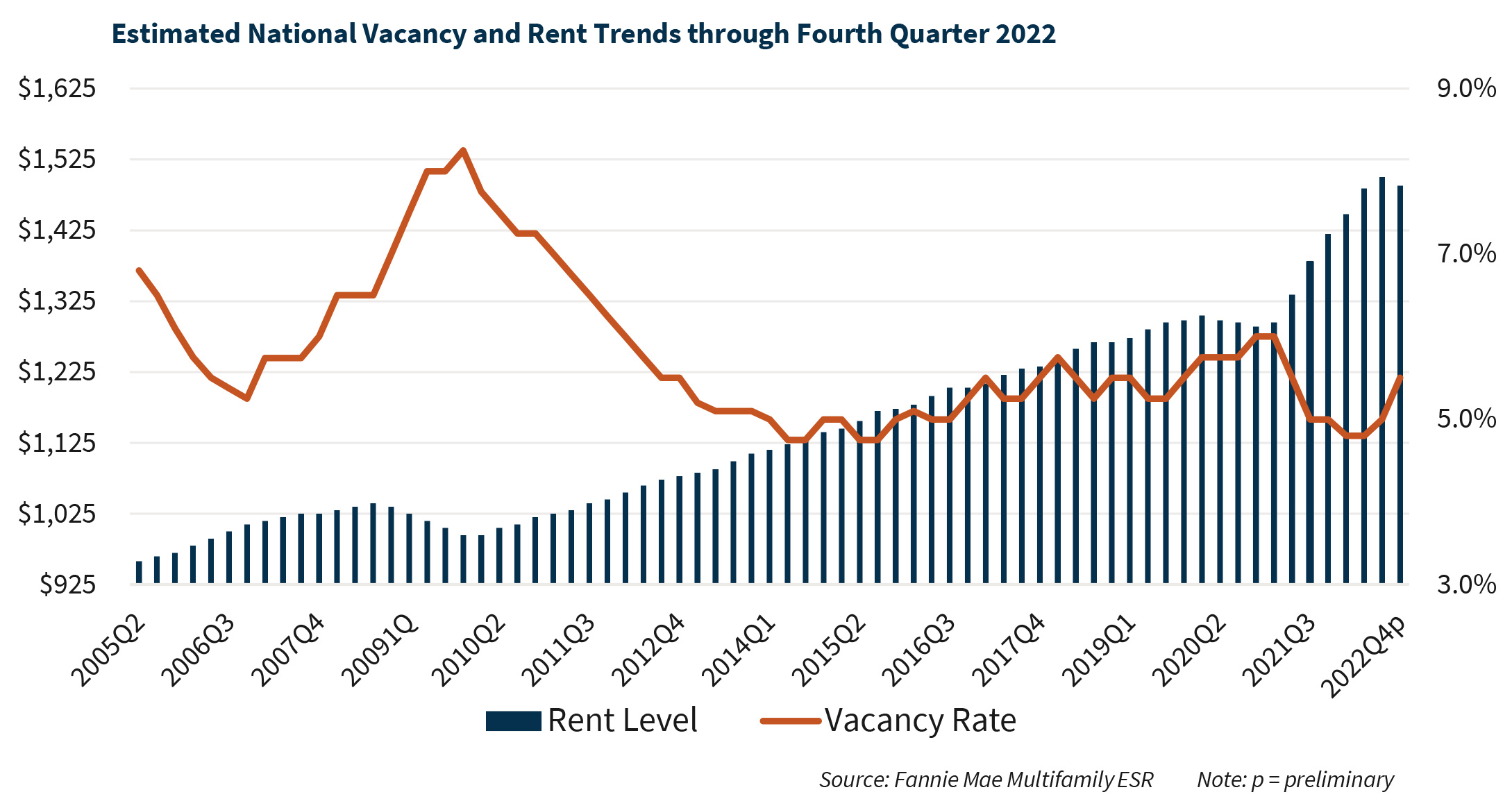 Demand for all classes of multifamily units remained strong in early 2022 but began to ease later in the year, as illustrated below. According to data from RealPage, Inc., as of fourth quarter 2022, year-over-year effective rent growth for stabilized class A and B units was a still remarkable 8.5 percent and 9.0 percent, respectively, but both classes saw double digit annual growth in the prior three quarters of the year. Effective rent growth for stabilized class C remained high throughout the year, and class C ended the year with the highest effective rent growth at 12.4 percent. We believe that the slowing in rent growth across all classes later in the year was the result of slightly diminishing demand as the national economy eased, and a general easing in market conditions after several consecutive quarters of unsustainable rent growth.

As effective rent growth experienced easing later in 2022, so did the industry see a rise in the number of properties offering concessions, as seen in the charts below.  As of fourth quarter 2022, an estimated 12.9 percent of class A and 9.5 percent of class C properties were offering concessions, rising from mid-year levels of 10.4 percent and 5.3 percent, respectively. While concession levels fell slightly during the year and remained below one month’s free rent on average, they continue to be above recent trends, as seen in the chart below left. We expect that both the value of concession and the number or properties offering them will be on the rise in 2023.

According to preliminary data from Dodge Data & Analytics Supply Track, which distinguishes between multifamily properties consisting of apartment and condominium units, more than 469,000 apartment units were completed in 2022, up notably from 2021’s 396,000 units and 2020’s 404,000 – the most recent peak year for new deliveries. Although Dodge Data & Analytics is currently tracking nearly 783,000 units slated for completion in 2023, we believe it is very unlikely that all those units will be completed before year end.

According to the National Multifamily Housing Council’s Construction Survey, as of December 2022, 84 percent of survey respondents stated that they were experiencing construction delays, which was the lowest level of the year and continued a declining trend from the second quarter. Delays in permitting and starts also eased as the year went on, though delays in starts remains relatively high at 79 percent. In addition, the developers surveyed indicated that labor and material shortages, which were a significant concern in 2021, both saw availability improvement in 2022. As a result of this apparent improvement in construction operations, we believe there will be a modest increase in the level of new units completed in 2023, though a recession could impact this. 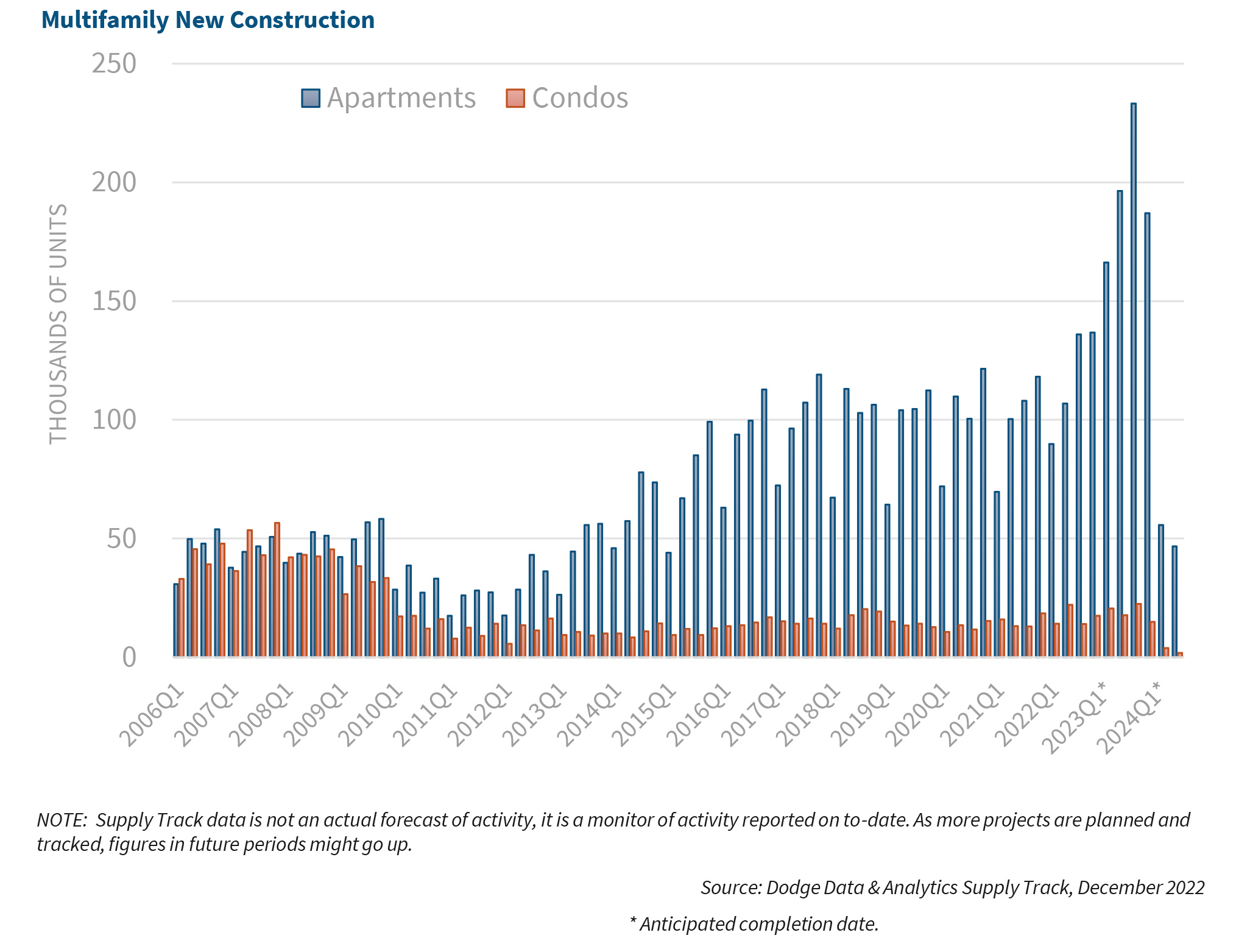 At a national level, we believe that there will continue to be a supply/demand imbalance this year, based on the amount of new multifamily units expected to come online compared to the anticipated increase in job growth. Although it is unlikely that all 783,000 new units slated for completion will be delivered by year-end 2023, the anticipated economic recession and the expectation of higher unemployment is unlikely to produce enough demand to keep up with the wave of new deliveries.

Year-over-year job growth is expected to be -1.1 percent by the end of 2023, according to Fannie Mae’s latest economic forecast, resulting in an estimated loss of 2.0 million jobs, meaning that multifamily rental demand would be weak, just as more than 783,000 new units are expected to complete and deliver.

Much of this new supply consists of more expensive class A units and is primarily concentrated in about 15 metros, as seen in the chart below. In addition, several of the impacted submarkets are some of the most expensive in the country, including New York, Washington, D.C., Seattle, and Los Angeles.

Although Moody’s Analytics is expecting some metros to see positive job growth in 2023, such as Austin, Dallas, Orlando, and Raleigh, the amount of elevated supply might still outstrip demand. 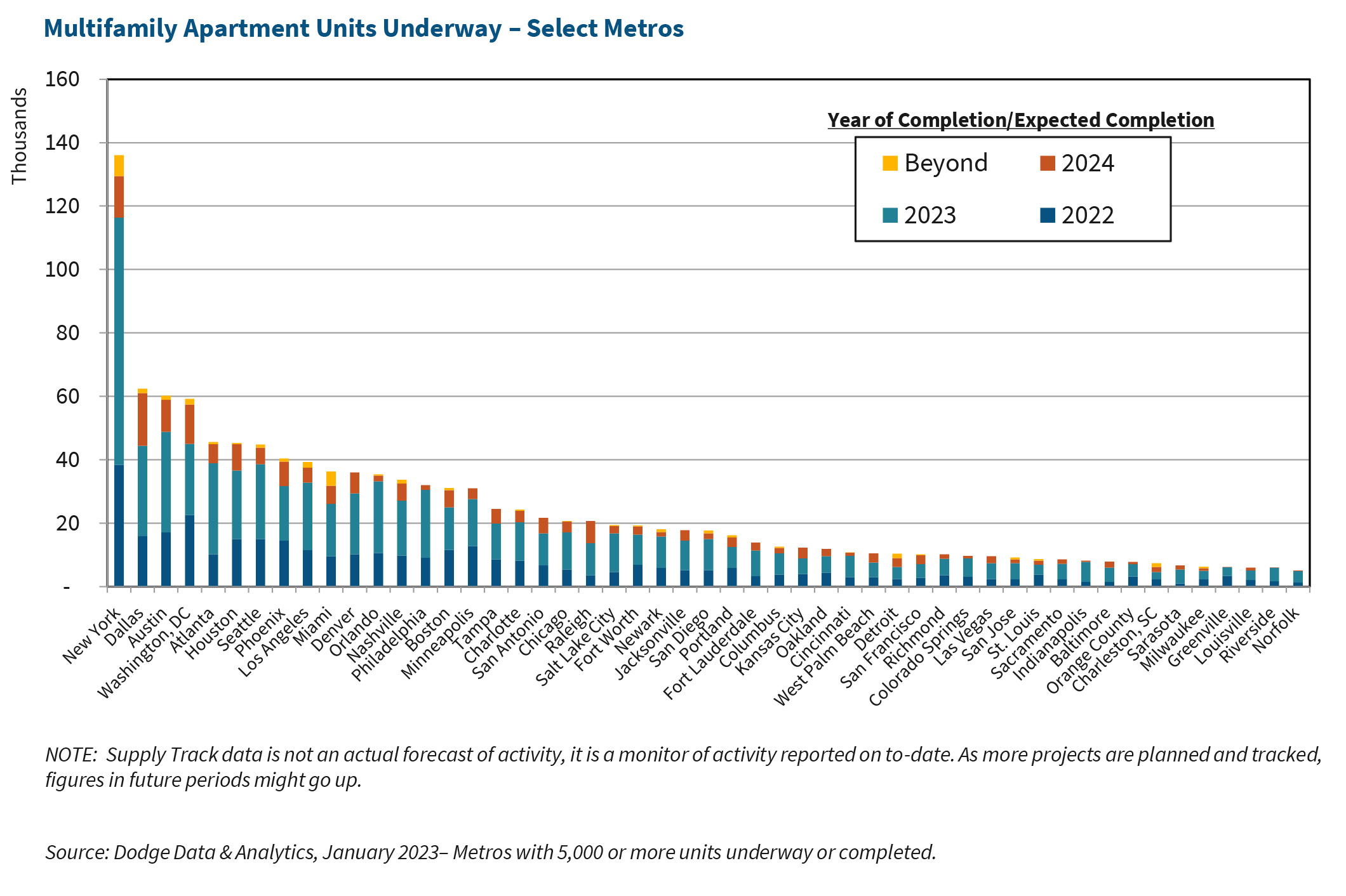 Positive Job Growth Will Not Be Enough in Some Metros…

Some other metros, especially ones that have seen recent explosive job and population growth, such as Austin, Phoenix, Dallas, and Salt Lake City, may also not see enough job growth in 2023 to absorb the wave of new supply coming. Some of the Texas metros, such as Austin, for example, will likely have good job growth of about 1.7 percent, according to Moody’s Analytics, which should produce demand for more than 7,000 multifamily units. Unfortunately, the metro is expecting more than 31,000 units to deliver in 2023, leaving a shortfall of more than 24,000 units of demand. Dallas is also under a cloud of excess new supply in 2023. Even with anticipated job growth of 1.5 percent, the metro is expected to only need 11,059 new multifamily units, yet it is slated to deliver more than 28,000 units in 2023, creating an excess of more than 17,000 new multifamily units.

While there were several signs of a cooldown of multifamily fundamentals later in 2022, sales volume reached the highest level ever seen year-to-date through the third quarter. We believe the elevated activity seen in the beginning of the year was driven in large part by investors rushing to get into the market before interest rate hikes made financing too difficult or expensive. But even with a slowdown in activity, prices continued to increase.

Multifamily cap rates remained low in 2022, at a national estimated level of 4.7% through the third quarter. However, we believe multifamily cap rates are likely to increase above 5.0% by early 2023 as investor demand further moderates and the 10-year Treasury rises.

We maintain a cautious outlook for the multifamily sector in 2023. We expect the multifamily sector to see a decline in demand during the first half of the year, resulting in negative rent growth for at least the first quarter of 2023, with a return to slightly increased demand during the second half. After two years of above-average rent increases, a decline in rent growth is a welcome trend for many renters but is not expected to contribute much to increased affordability, at least at a national level. In some metros, especially those with a large amount of supply expected to come online during the year, it could push rents down and concessions up quite significantly, but that is likely to be on a localized, submarket level.

It is important to note that whether the expected recession occurs earlier in the year or later, we expect the multifamily housing market to experience a softening in demand in 2023 and extending into 2024.