The multifamily sector experienced an unexpected resurgence in demand in 2021 due to the combination of a factors, including an improving national economy, the advent of readily available vaccinations and boosters, pent-up demand, and favorable demographics. We expect a similar trend in 2022, with demand stabilization anticipated to commence starting in the latter part of the year. It is important to note that although the overall national trend is expected to remain above average for the year, multifamily fundamentals and trends are expected to vary by metro, submarket, and, in some cases, neighborhood.

The national multifamily vacancy rate is expected to remain stable in 2022 at about 5.0 percent, as illustrated in the chart below, and then begin to trend upward further out in the forecast in 2023 to 2024. The pace of absorption is expected to normalize this year due to the elevated number of new units delivering over the next 12 months. In addition, we expect that concession levels will continue to normalize, but concession levels may increase during the late spring and summer months as some renters might encounter “sticker shock” upon the renewal of their leases at the pre-concession level and the expiration of the past year’s generous discounts.

Positive Demand Expected to Continue in 2022

Demand for multifamily rental units was quite robust in 2021, and we expect it to remain positive but moderate further out in the forecast starting in 2023. According to data from RealPage, multifamily demand was estimated at 673,478 units in 2021, compared to an estimated 296,520 units in 2020. For 2022, RealPage is anticipating annual demand of 233,305 multifamily units this coming year, followed by 189,234 units of multifamily demand in 2023.

The national multifamily vacancy rate is expected to remain flat in 2022, primarily due to the amount of new supply expected to deliver over the next 12-18 months, coupled with the expected increase in rental demand stemming from improving employment trends. Although much of this new supply is expected to consist of more expensive, class A units in many places, we believe that higher single-family home prices may cause some tenants to opt for newer rental units that offer more amenities. As a result, we believe the national vacancy rate will remain near its current level of 5.0 percent throughout 2022 and even into early 2023. It is important to note that remaining at this level would be below both the longer-term historical average and the most recent estimated vacancy peak of 6.0 percent that occurred in first quarter of 2021, as seen in the chart below.

We estimate that national rent growth reached at least 10 percent in 2021, after having ended 2020 at an estimated negative 0.75 percent. We believe that pent-up demand in 2021, coupled with an improving economy and generous concessions available on many multifamily units, allowed rent growth to soar to unprecedented highs. We expect rent growth to remain positive in 2022 but to moderate from last year’s accelerated pace to a more reasonable, yet still-elevated level.  As a result, we expect rent growth this year to be within a range of 4.0 to 5.0 percent by year-end 2022.

Demand for all classes of multifamily units soared in 2021, as illustrated below. According to data from RealPage, Inc., as of fourth quarter 2021, year-over-year effective rent growth for both Class A and B units rose by more than 15 percent. Class C effective rent growth also experienced an upswing in growth, climbing by more 7.0 percent year over-year. We believe that the increase in rent growth across the board last year stemmed from a combination of factors, including a quickly rebounding economy, increased job growth, and a pent-up demand for housing, coupled with generous concessions available in the first half of the year, to spur both a run-up in rental household formations and a “move up” trend by Class B and C renters.

Concessions Heading Back Down

Although the number of multifamily units offering concessions plummeted during 2021, concession rates themselves remained elevated, as seen in the charts below. As of fourth quarter 2021, only an estimated 10 percent of all multifamily rental units were offering concessions, compared to nearly 23 percent in the fourth quarter of 2020, and well below the most recent trough of 14 percent in third quarter 2018. And while concession levels are below one month’s free rent on average, they remain well above recent historical trends, as seen in the chart below left.

According to estimates from Dodge Data & Analytics Supply Track, which distinguishes between multifamily properties consisting of apartment and condominium units, more than 386,000 apartment units were completed in 2021, down slightly from 2020’s nearly 405,000 units – the most recent peak year for new deliveries. Although Dodge Data & Analytics believes that the number of units slated for completion in 2022 is estimated at more than 600,000, we believe it is unlikely that all those units will be completed before year-end.

According to the National Multifamily Housing Council’s Construction Survey, as recently as September 2021, more than 93 percent of survey respondents stated that they were experiencing construction delays. And while 91 percent of respondents reported delays in permitting, entitlement, and professional services as the cause of delays, more than 98 percent of respondents reported that their projects were also being impacted by a lack of materials and 100 percent were dealing with an increase in the pricing of those materials. In addition, 88 percent of respondents reported that their projects were being impacted by the availability of labor, with 54 percent stating that they were seeing less availability even after offering higher compensation levels of about 12 percent on average.  These are all issues that are likely to take time to rectify, and as a result, we expect will be a drag on construction of new multifamily properties for at least the next six months, if not longer. 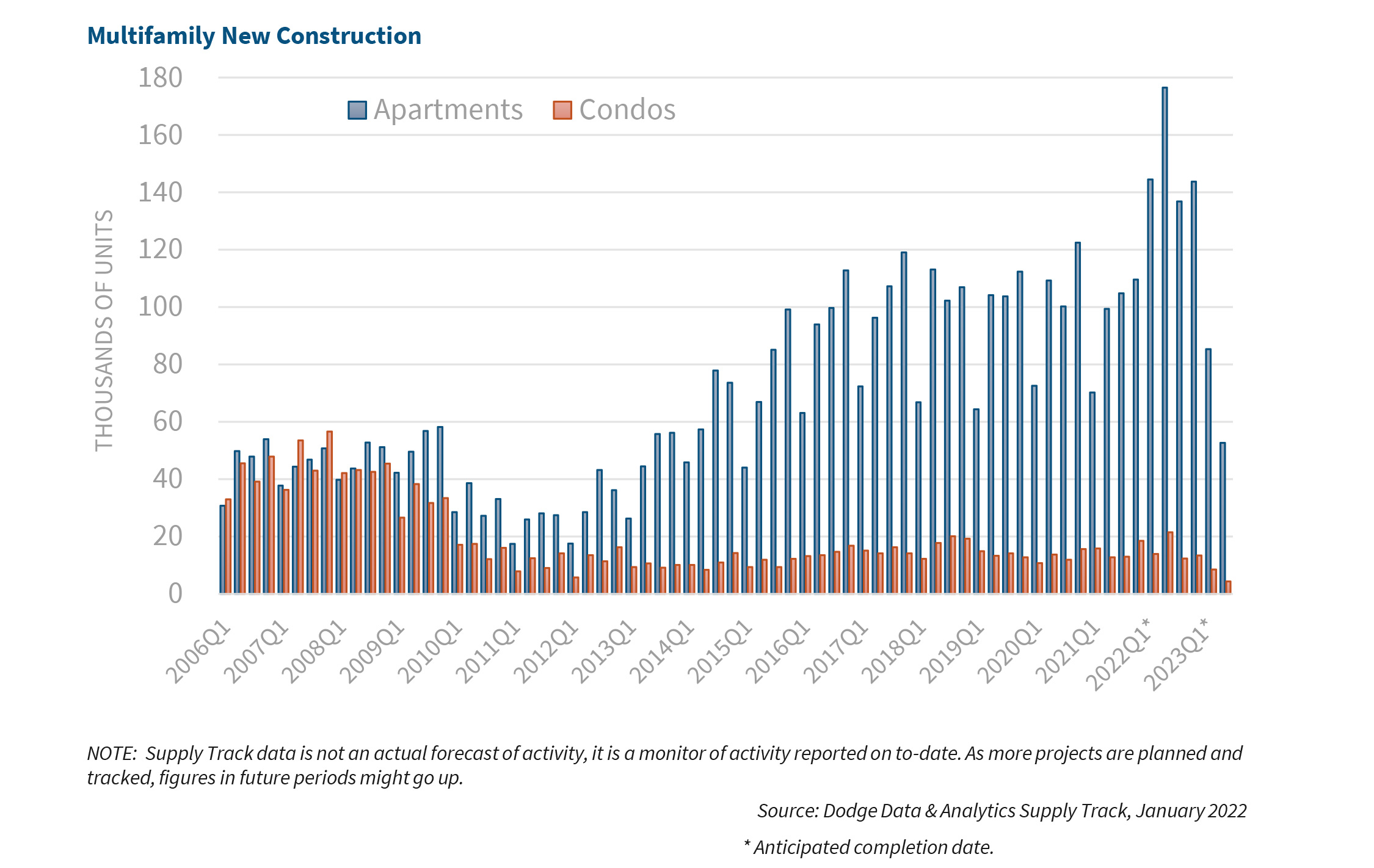 Continued but More Normalized Demand in 2022

At a national level, we project that there will continue to be a supply/demand imbalance this year, based on the amount of new multifamily units expected to come online compared to the anticipated increase in job growth. Although it is unlikely that all 600,000 new units slated for completion will be delivered by year-end, the economic recovery and the amount of job growth combined are still likely to produce enough demand to outpace even a reduced slate of deliveries.

Year-over-year job growth is expected to be 2.8 percent by the end of 2022, according to Fannie Mae’s latest economic forecast, which could result in an estimated 4.3 million jobs. Based on that amount of job growth, theoretically multifamily rental demand could range from 400,000 units to as high as 700,000 units. That is because vacancy levels are so tight across most of the country, that both replacement demand and new demand for multifamily rental housing are expected to continue competing for a limited number of available units.

Much of the new supply consists of more expensive Class A units and is primarily concentrated in about 15 metros, as seen in the chart below. In addition, many of the impacted submarkets are some of the most expensive in the country, all of which continue to see a rebound in demand and rent growth. As a result, we believe continued demand for multifamily rental units will drive the momentum for positive fundamentals – and absorption – over the next 12 months. 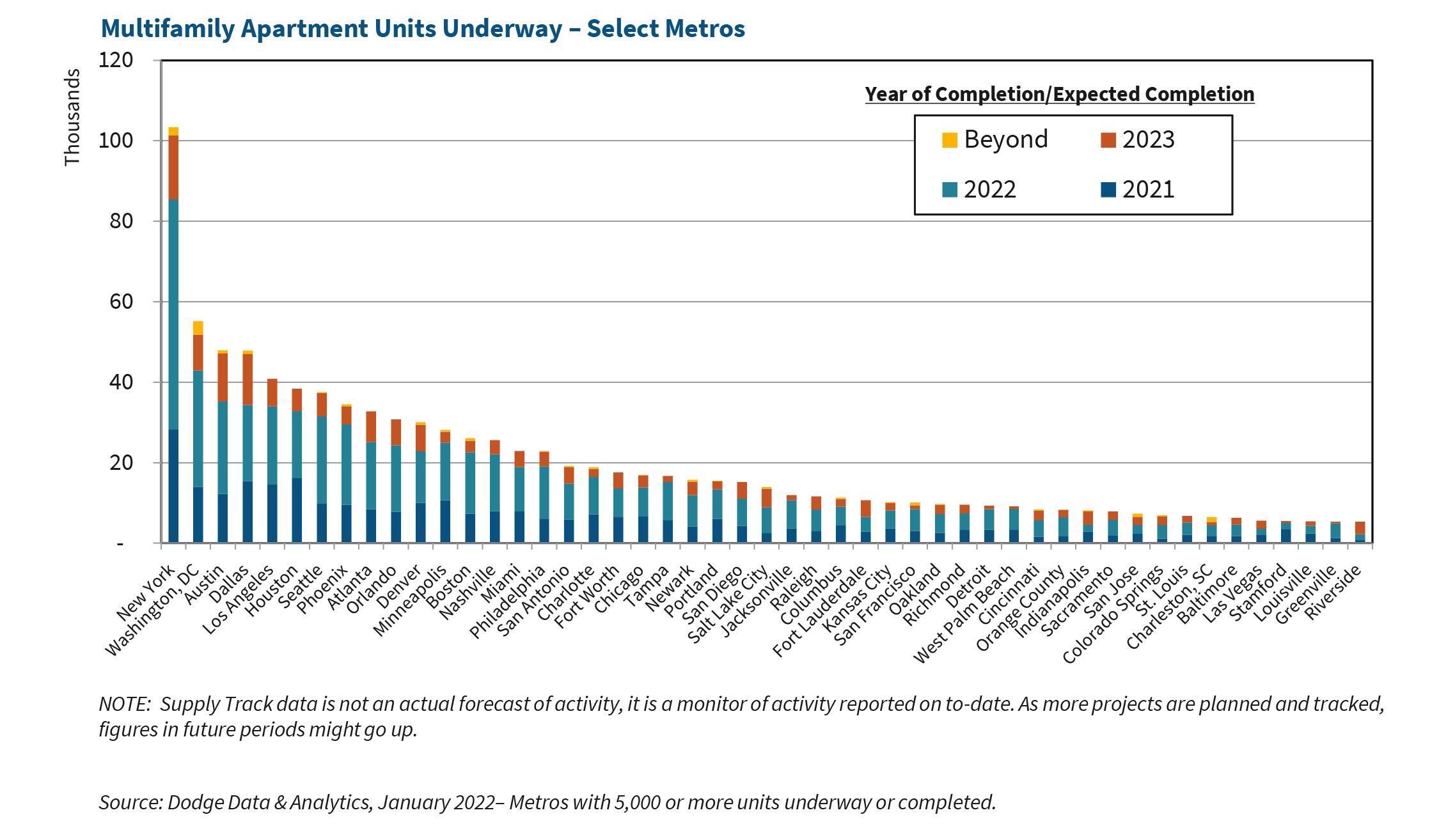 Demand Outpacing Supply in Many Metros

The nation is expected to see widespread positive job growth this year, as illustrated in the two charts below. Although Fannie Mae’s forecast for 2022 is anticipating a national employment growth rate of 2.8 percent, there are some metros that are expected to be below the national estimate, including Chicago, Cleveland, Indianapolis, and St. Louis. And yet, these are all metros that are expected to not have enough new multifamily supply to meet potential demand. For example, the Chicago metro is expecting 7,212 new multifamily units in 2022, but based on Moody’s Analytics’ anticipated job growth rate of 2.3 percent, the metro could produce demand for about 17,000 rental units, leaving a potential shortfall of 10,000 units. Indianapolis has fewer than 1,800 multifamily units expected to deliver this year, but with Moody’s Analytics expecting a job growth rate of 2.5 percent, the metro could still produce demand for more than 4,000 rental units, leaving a shortfall of more than 2,500 units. St. Louis could also have a shortfall in new supply: An expected job growth rate of just 2.3 percent could still produce demand for about 5,000 new multifamily units, but fewer than 3,000 new units are expected to deliver over the next 12 to 18 months.

In addition, job growth in some metros is expected to be well above the national average this coming year, likely leading to a supply/demand imbalance. For example, two Florida metros, Tampa and Miami, are both expected to surpass the national employment growth average, with expected job growth of at least 4.0 percent or higher, due to continued expansion in the professional services, technology, leisure and hospitality, and logistics and transportation sectors. And yet both could be undersupplied based on anticipated new multifamily unit deliveries. Although Miami is expecting about 20,000 new multifamily units this coming year, the number of anticipated new jobs could produce demand for more than 22,000 new units. Tampa’s new multifamily supply is estimated at about 8,700 units this coming year, but projected job growth of 4.6 percent could potentially produce demand for at least 11,000 multifamily units.

On the other side of the country, we believe that once again Las Vegas is likely to be undersupplied. With Moody’s expecting job growth there of more than 5.0 percent, there could be demand for more than 8,000 rental units, yet only about 1,600 multifamily units are expected to deliver in 2022.

With interest rates remaining low over the past year and housing prices estimated to having risen by more than 15 percent in 2021, the demand for rental housing has kept many investors focused on the multifamily sector. Indeed, preliminary data from Real Capital Analytics suggests that multifamily sales could have totaled more than $264 billion in 2021, much of which was likely spill-over demand from 2020. Over the past two years, average multifamily capitalization rates have further compressed, as seen in the chart below. Although national multifamily cap rates started 2020 at approximately 5.3 percent, according to data from Real Capital Analytics, rates are estimated to have ended 2021 at 4.7 percent, a new low.

As the economic recovery continues, along with rising home prices, we believe that demographics and rental housing demand will keep multifamily fundamentals positive over the next 12 months.