Renovation Projects Tend to Be Recession-Proof

Interestingly, while banks pulled back from construction lending during the Great Recession, which affected new projects after 2010, the pullback did not appear to affect funding for renovation projects. This is most likely because renovating an existing property tends to be less risky than building a new property from the ground up. In fact, renovation projects almost doubled over the five-year period ending in 2014, averaging just under 650 projects per year and jumping to just under a third of all construction projects.

More than One Million Units Renovated in Past Two Decades 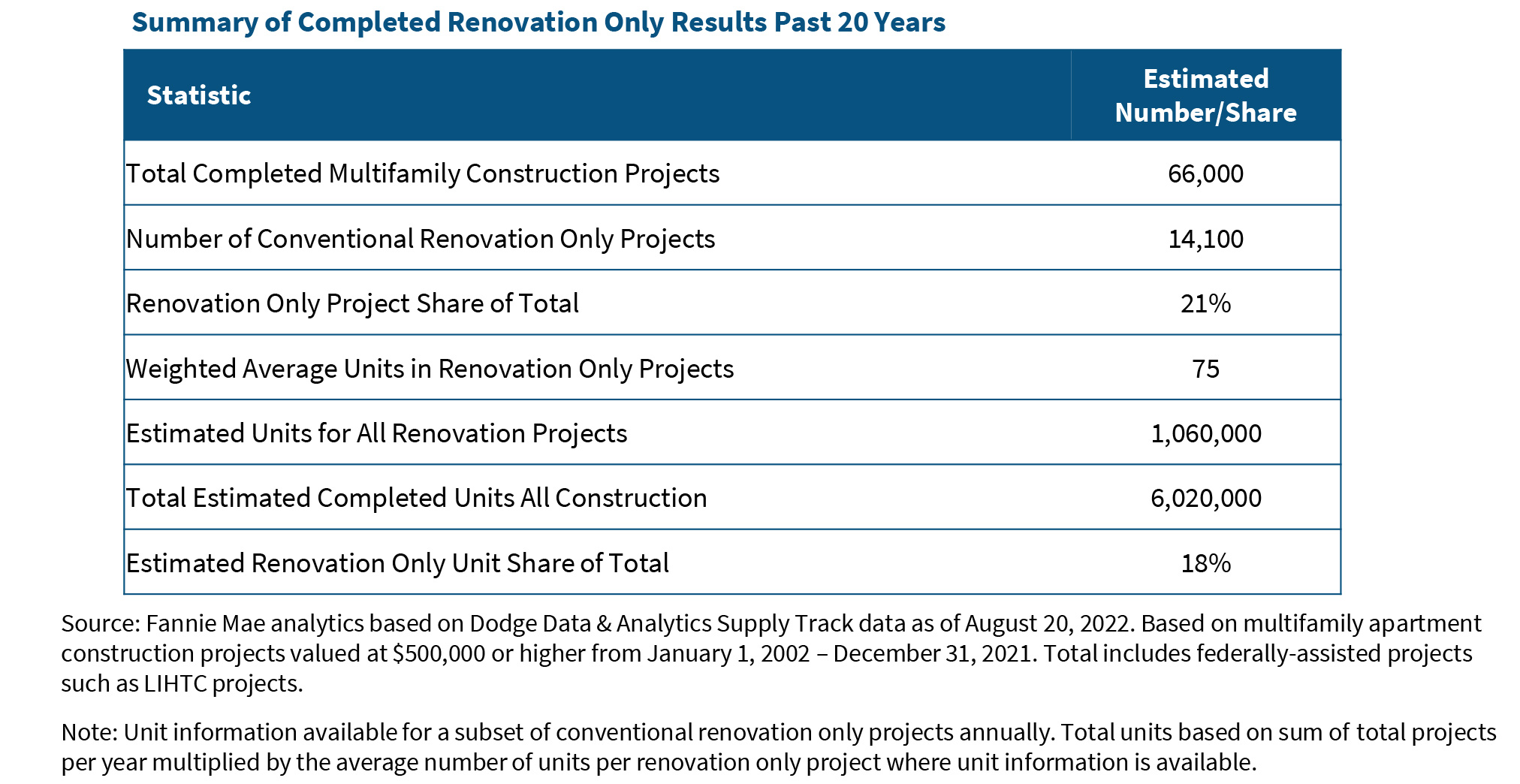 Renovations at multifamily properties are frequently undertaken to maintain both a property’s condition and appeal. These renovations may include facade improvement, as well as more minor projects, such as updating kitchen cabinets or bathroom fixtures. These maintenance renovations tend to be more modest in scope. Simply painting or recarpeting is not generally substantial enough to be considered a renovation.

Renovation may also be part of an investment strategy. Value-Add investing involves purchasing an underperforming multifamily asset at a discount, implementing significant renovations, and then raising rents. Value-Add investing tends to be more substantial and may include things like changing a unit’s layout to create an open floor plan for instance or redoing a kitchen or bathroom entirely, in addition to the renovations noted above.

Most data vendors do not track the reason for a renovation project generally. Often, the data is gathered from sources that do not provide such granular information, especially since renovations tend to have a short duration. However, renovations do vary greatly in construction dollar values, giving a hint as to the extent of the type of renovation that took place.

As shown in the left-hand chart below, a significant number of multifamily renovations have a construction value of under $1 million. The share of renovations valued under $1 million averaged about 38 percent of such projects in the run-up to the Great Recession, which started in December 2007. Given the relatively low value of these projects, it’s possible that these reflect maintenance renovations to maintain property condition and appeal.

From the start of the Great Recession through approximately 2013, however, the number of renovations under $1 million rose slightly to about half of all renovation projects annually. This uptick likely reflects the willingness of lenders to finance smaller, less risky projects during a period of economic uncertainty. It also reflects the importance placed on maintenance renovation projects to keep up a property’s value as the share of such projects remained stable during this period.

However, what may be most interesting is that the share of projects estimated at under $1 million has remained relatively stable. Since the start of 2014, the share of renovations has averaged about 45 percent of all projects, higher than the pre-Great Recession share. This is surprising as rising construction costs coupled with inflation suggest that the share of smaller renovation projects should have declined. And yet, as shown on the righthand chart below, the number of renovations increased by about 300 projects to nearly 1,000 projects starting in 2014 and has remained at this number or higher annually since. 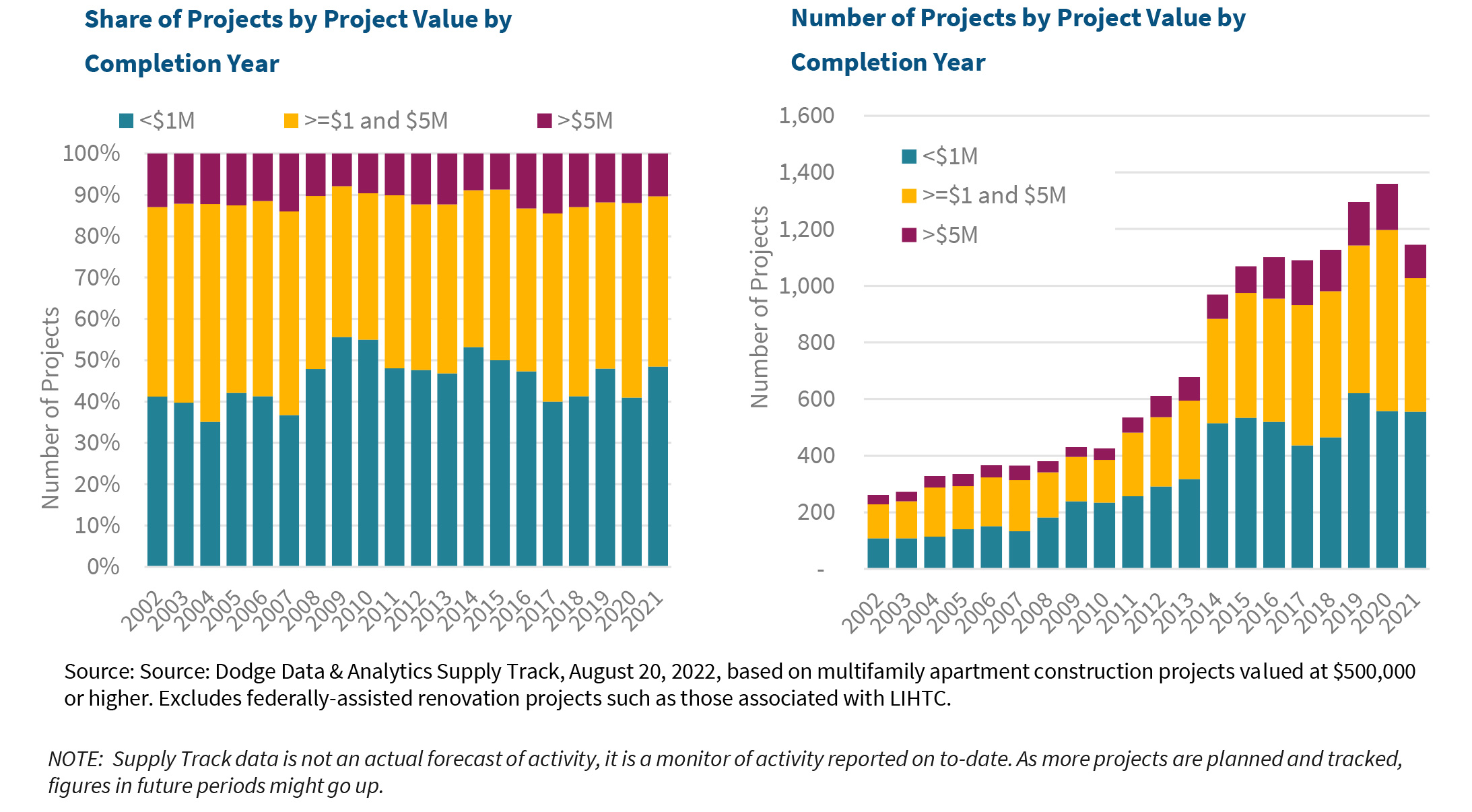 Mid-Range Renovation Projects On the Rise

Renovations valued under $1 million saw the largest percentage increase in 2014, jumping over 60 percent to 515 projects, while renovations in the $1 million to $5 million range increased by 33 percent to about 370 projects.

However, from 2013 to 2020, renovations above $1 million more than doubled to an estimated 800 projects compared to just an estimated 75 percent increase for projects valued at under $1 million, or about 560 projects annually.

While a component of this increase is attributable to higher construction costs, increased investor appetite for multifamily due to rising demand for apartments likely also played a role. With rising construction costs making it more costly to build new apartment properties from the ground up, some investors likely found it easier to purchase existing properties and renovate them.

Most Renovation Projects Have a Construction Value Over $1 Million

Most Renovations Occur in Larger Metros

Most multifamily renovations have occurred in older and larger metros which tend to have many barriers to entry for new multifamily construction projects. With over 5,000 renovations since 2010 after the end of the Great Recession, the New York Metro area, which includes parts of New Jersey and Pennsylvania, is the clear leader in renovations. This is consistent with the metro area’s status of having the nation’s largest renter population, as well as being one of the most densely-populated.

Excluding the large New York metro area, many of the metro areas with the largest number of multifamily renovations over the past decade can also be found in some of the nation’s oldest and largest metro areas, as shown below. The top five renovation metros since 2010 are Boston, San Francisco, Washington, D.C., Philadelphia, and Chicago. Interestingly, the Miami and Houston metro areas are also among the nation’s top 10 metro areas for renovations. This is most likely due to the renovations necessary after several hurricanes. For instance, Houston saw a jump in renovations in 2017 and 2018 after Hurricane Harvey, while Miami saw a jump after Hurricane Irma in 2017. 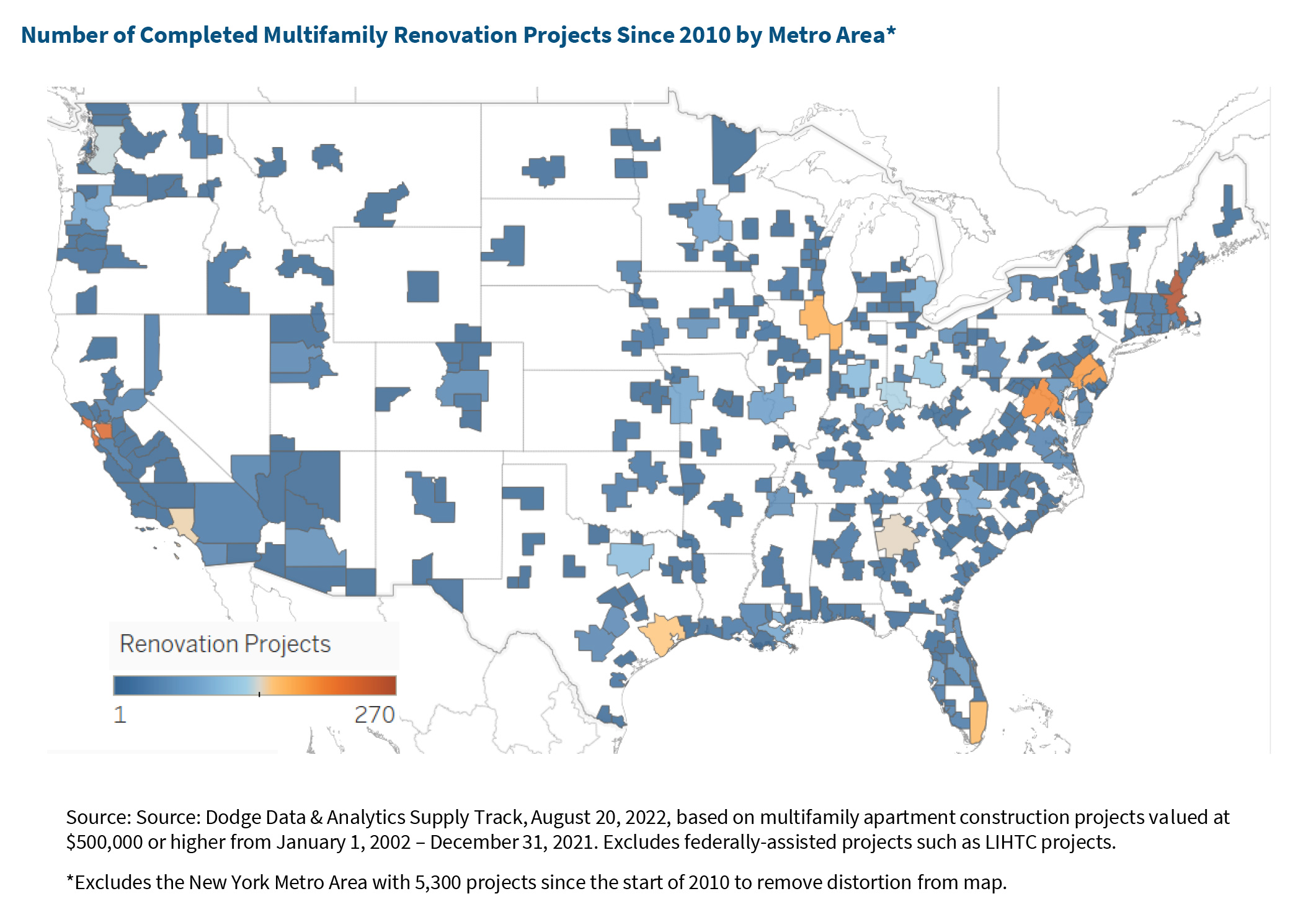 Cost of Renovations Trended Downward in 2021

Since 2010, the cost of multifamily renovations has grown, averaging a total of $2.4 billion annually. In 2020, the cost soared to $3.6 billion – about four times the value recorded in 2010– before trending downward in 2021 to $2.8 billion. Undoubtedly, rising construction costs coupled with labor shortages and supply chain disruptions likely contributed to the substantial increase, which since then appears to be moderating.

However, even taking into account the cost of rising materials, in real terms, the cost of multifamily renovations has increased steadily since 2010 and soared to an estimated $2.7 billion in 2020 before declining to $2.0 billion in 2021. 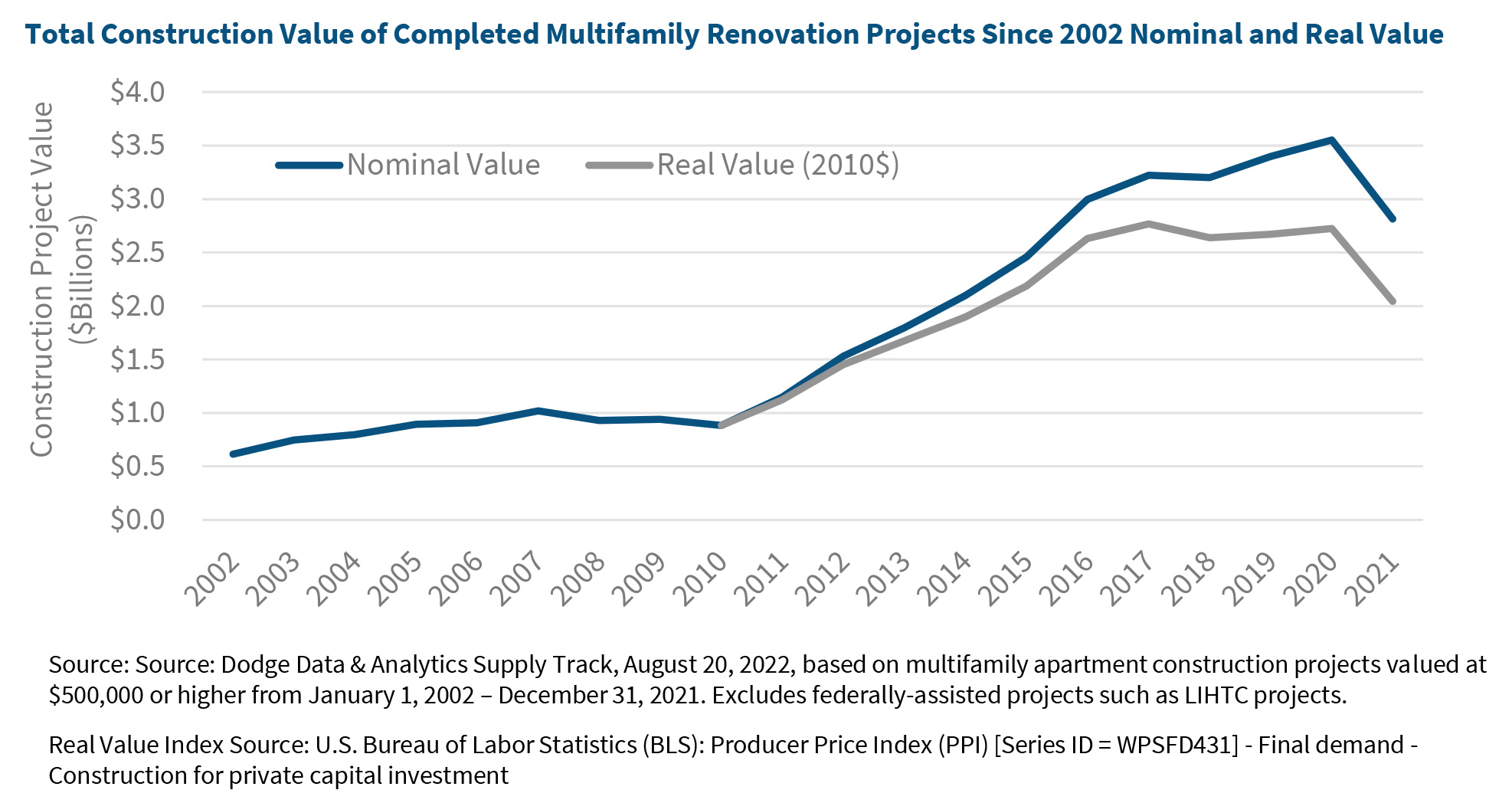 New multifamily properties built from the ground up have become more expensive over the past few years due to the increased cost of construction materials and the shortage of trained construction workers. In addition, the average new multifamily property can take between 18 and 36 months, if not longer, to complete. By contrast, many renovation projects are generally turned around in less than a year and require fewer workers and materials. Hence, they tend to be considered less risky for property owners and lenders alike. As a result, the level of renovation projects is much more stable from year to year than new construction.

Indeed, the share of renovations since 2015 has averaged about a quarter of all multifamily construction projects, higher than the 15 percent share prior to the Great Recession, and has provided a steady supply of updated apartments for renters over the past several years.