While there may seem to be a lot of multifamily units under construction, at a national level the potential demand for new units is expected to be in balance with current supply underway. Unfortunately, much of this potential demand – and supply – is not evenly matched around the country; the match between supply and demand varies greatly between metropolitan areas. This means that a number of metropolitan areas could end up with an oversupply of newer, more expensive class A multifamily units over the next 18 to 24 months, which in turn, would negatively impact fundamentals, and not help offset the ongoing lack of affordable multifamily rental housing across the country.

There are more than 630,000 new multifamily units currently underway, with more than 440,000 of those units expected to complete and come on line this year. That is in addition to the nearly 388,000 multifamily units delivered in 2018 alone. These totals are for multifamily rental units only. By contrast, there are only about 61,000 condominium units underway, of which about 50,000 are expected to complete this year. Nevertheless, new deliveries are expected to ebb over the next 12 months, as seen in the chart below, which should give the market time to absorb these units.

Job growth is expected to be about 1.5 percent this year, according to Fannie Mae’s forecast, an estimated addition of more than 2.2 million new jobs. Based on that amount of job growth, multifamily rental demand could theoretically be in the range of about 450,000 units in 2019. But job growth – and multifamily demand – will vary by metropolitan area.

As seen in the Change in Employment Growth chart below, most of the nation’s major metropolitan areas are expecting positive job growth over the next two years. The economic expansion – and new job growth – over the past several years has brought the nation to near full employment, as reflected in the June 2019 unemployment rate of just 3.7 percent. As a result, it’s not surprising that most metropolitan areas are expecting positive but slower job growth over the next two years as the economy starts to slow down.

By contrast, projected job growth for metropolitan areas with some of the nation’s most expensive rental housing, such as Los Angeles, San Francisco, San Jose, New York, and even Boston, has declined from previous expectations, just as new multifamily deliveries are expected to peak. 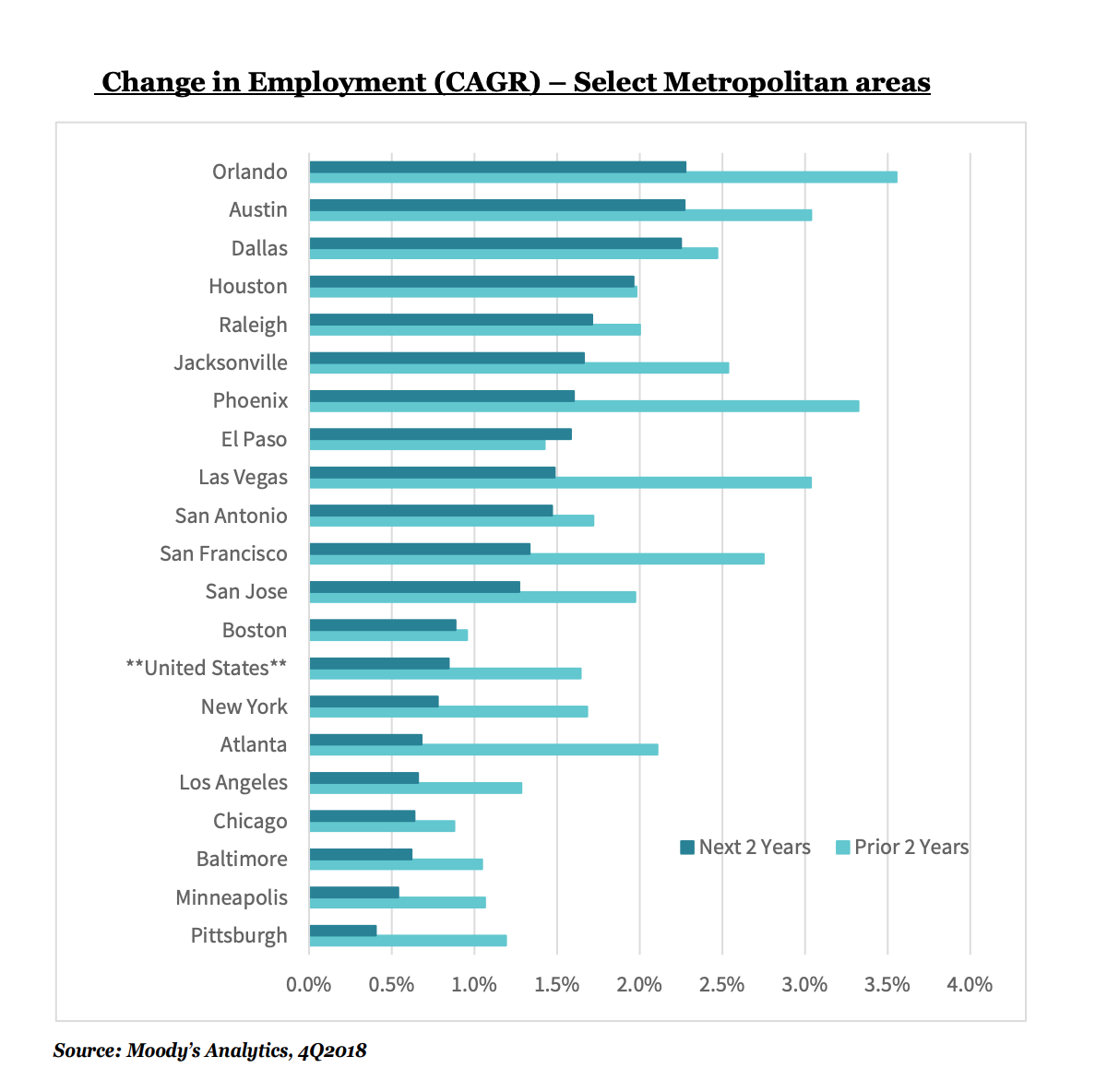 New Supply Concentrated in a Handful of Metropolitan Areas

At nearly 35,000 units, Washington, DC has the second-highest level of new multifamily rental supply underway. The bulk of the DC metropolitan area’s new multifamily construction is now located outside of the District, with the Northern Virginia submarkets accounting for more than 15,000 units underway, including Rosslyn, Ballston, Tysons Corner, Fairfax, and Old Town. There are more than 13,000 units underway in the District proper. The most impacted District submarkets include Anacostia, Northeast, Capitol Hill, the Southwest Waterfront, Brightwood, Mt. Pleasant, and Fort Totten.

Why are developers building so many new multifamily units primarily in higher-cost metropolitan areas? The leading reason is rising construction costs. According to data from RS Means, multifamily construction costs have risen 5.3 percent annually on average from 2016 through 2018, and the cost of most building materials doesn’t fluctuate that much by location of the construction project. Therefore, many developers have stayed focused on those metropolitan areas that boast a trifecta of solid job growth, positive demographic trends, and above average asking rents. This helps explain why metropolitan areas such as St. Louis and Birmingham – both of which have had positive job growth over the past few years – do not have elevated levels of new multifamily supply underway. For example, St. Louis is expected to have job growth of 1.9 percent over the next 18 months, suggesting potential demand for more than 5,000 multifamily units, yet only about 2,000 units are underway. More dramatically, Birmingham is in the midst of an economic expansion and is expecting 1.7 percent job growth between now and the end of 2020, creating potential demand for nearly 1,900 units, yet fewer than 920 units are underway.

But the average asking rent in both St. Louis and Birmingham is estimated at about $950, according to CoStar. That rent level is not much of an incentive for multifamily developers to break ground. That’s because there is not much of a project cost differential between lower cost metropolitan areas such as Birmingham and a higher-priced metropolitan area, such as Seattle. But there is a large differential in the amount of rent that can be commanded. With an average asking rent of $1,730 coupled with annualized rent growth of nearly 4.0 percent, it is easy to understand how Seattle now has more than 21,000 units underway.

As seen in the table below, most major metropolitan areas may be oversupplied over the next 12 to 24 months, based on projected job growth. Only a few, two of which are highlighted in yellow, will likely be undersupplied. Some of the larger and/or higher-cost metropolitan areas likely to face oversupply include New York, Washington, DC, Denver, Boston, Atlanta, Portland, and Miami, but even smaller and/or less expensive rental metropolitan areas have not been spared. These include Colorado Springs, Richmond, Kansas City, and even Detroit.

While Dallas will also likely face over supply short-term, in the longer term it may actually be slightly under-supplied. That’s because Dallas, with a population of nearly 8 million, is expected to have some of the best job growth in the country over the next two years, at an estimated 4.6 percent. As a result, although there could be an oversupply of more than 5,600 units by the end of 2020, the metropolitan area could easily find itself facing a supply shortage of more than 3,500 units within 18 months. This even takes into account the possibility of national economic slowdown.

Denver’s high-tech jobs account for 7.1 percent of the metropolitan area’s total employment but that also includes manufacturing jobs, which are highly cyclical and can be negatively impacted by changes in global trade. In addition, Denver has more Millennials and Gen Xers than the national average, which is a plus for the multifamily sector. But on the other hand, its net migration trends are less robust than would be expected for a metropolitan area of its size, which could negatively impact multifamily demand over the long-term.

For example, Austin is a smaller metropolitan area with about 2.2 million people, yet its net migration last year totaled more than 37,000 people. By contrast, Denver’s net migration was 23,000 despite having a population of nearly 3 million people. In addition, Denver’s job growth is expected to sputter in 2021, declining to nearly zero, just as 6,000 multifamily units will have delivered the year before. More importantly, Moody’s is anticipating that Denver’s job growth will “…slow in high-skill, high-paying industries.” If that occurs, the multifamily sector could be negatively impacted and the potential for Denver to remain oversupplied could extend well past the next 24 months.

Houston, Phoenix, and Las Vegas are a few of the metropolitan areas that are expected to see some of the best job growth in the nation over the next two years. This is primarily due to growth in the professional services and education and healthcare sectors, and in the case of Las Vegas primarily the tourism sector. Yet, these metropolitan areas are likely to be undersupplied, especially over the short-term.

While Houston’s reliance on the energy sector is still a primary driver of its economy, it also relies on the education and healthcare sectors as well as professional and business services sectors, thereby improving the metropolitan area’s industrial diversity. As a result, overall job growth has been above 2.0 percent on average annually since 2018 and is expected to remain above the national average over the next several years. While that should produce demand for more than 24,000 multifamily units through 2020, only about 12,000 units are expected to deliver by that time.

Phoenix is also likely undersupplied. The metropolitan area’s economy is in a mid-expansion phase according to Moody’s Analytics. In addition to the education and healthcare and professional and business services sectors, the financial services sector here has recently also become a driver of employment. Phoenix’s fairly well-diversified economy’s projected job growth should produce demand for more than 13,000 multifamily units, but only about 11,000 units are underway. 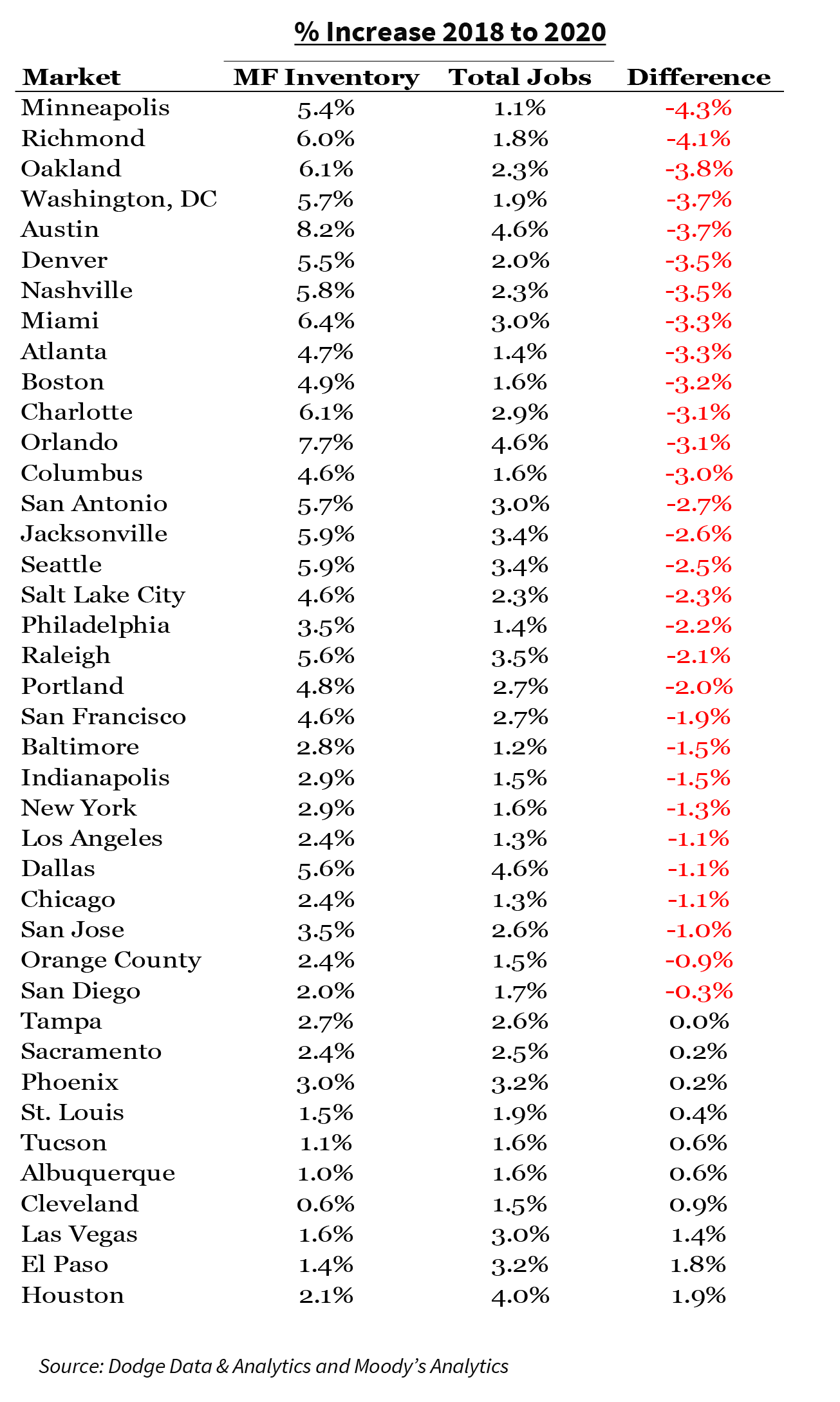 The expected mismatch of supply and demand for new class A multifamily units in many metropolitan areas is expected to be short-lived, lasting only the next 18 to 24 months. Expected reductions in new supply over the next few years, coupled with expectations for continued demographic trends and that some metropolitan areas will see above-average job growth, should result in multifamily rental demand remaining stable over the longer-term.

Opinions, analyses, estimates, forecasts and other views of Fannie Mae's Multifamily Economics and Market Research Group (MRG) included in these materials should not be construed as indicating Fannie Mae's business prospects or expected results, are based on a number assumptions, and are subject to change without notice. How this information affects Fannie Mae will depend on many factors. Although the MRG bases its opinions, analyses, estimates, forecasts and other views on information it considers reliable, it does not guarantee that the information provided in these materials is accurate, current or suitable for any particular purpose. Changes in the assumptions or the information underlying these views could produce materially different results. The analyses, opinions, estimates, forecasts and other views published by the MRG represent the views of that group as of the date indicated and do not necessarily represent the views of Fannie Mae or its management.