Fannie Mae’s National Housing Survey® asks respondents a series of questions intended to better understand housing sentiment, including questions regarding renting, homeownership, and both current and future expectations of the housing sector. The survey focuses on six groups of respondents: homeowners, single-family renters, multifamily renters, renters aged 18-34, and renters aged 35 and older. The most recent renter survey, conducted during the first quarter of 2020, yielded some interesting findings, including from renters aged 18-34, the prime renting cohort for the multifamily sector comprised of both Millennials and Generation-Z (Gen-Z).

Some of the trends identified in the survey differed from just a few years ago. One of the most interesting is that the prime renting cohort’s desire for eventual homeownership appears to be softening. Even though this group still believes that owning makes the most financial sense, there are several key reasons why their stance on homeownership appears to be waning: it is often cheaper to rent than to own a home; renting offers more flexibility in housing choices; and renting is less of a “hassle” than owning.  Still, the majority of the prime renter cohort aspire to achieve homeownership at some point during their lifetime. Within the last few weeks a major economic shock occurred within the United States related to COVID-19, and the survey data referenced throughout this commentary was gathered prior to that shock.

They survey also asked about renters’ impressions of homeownership. The questions were framed from both a lifestyle and a financial perspective, and the answers for each were slightly different. 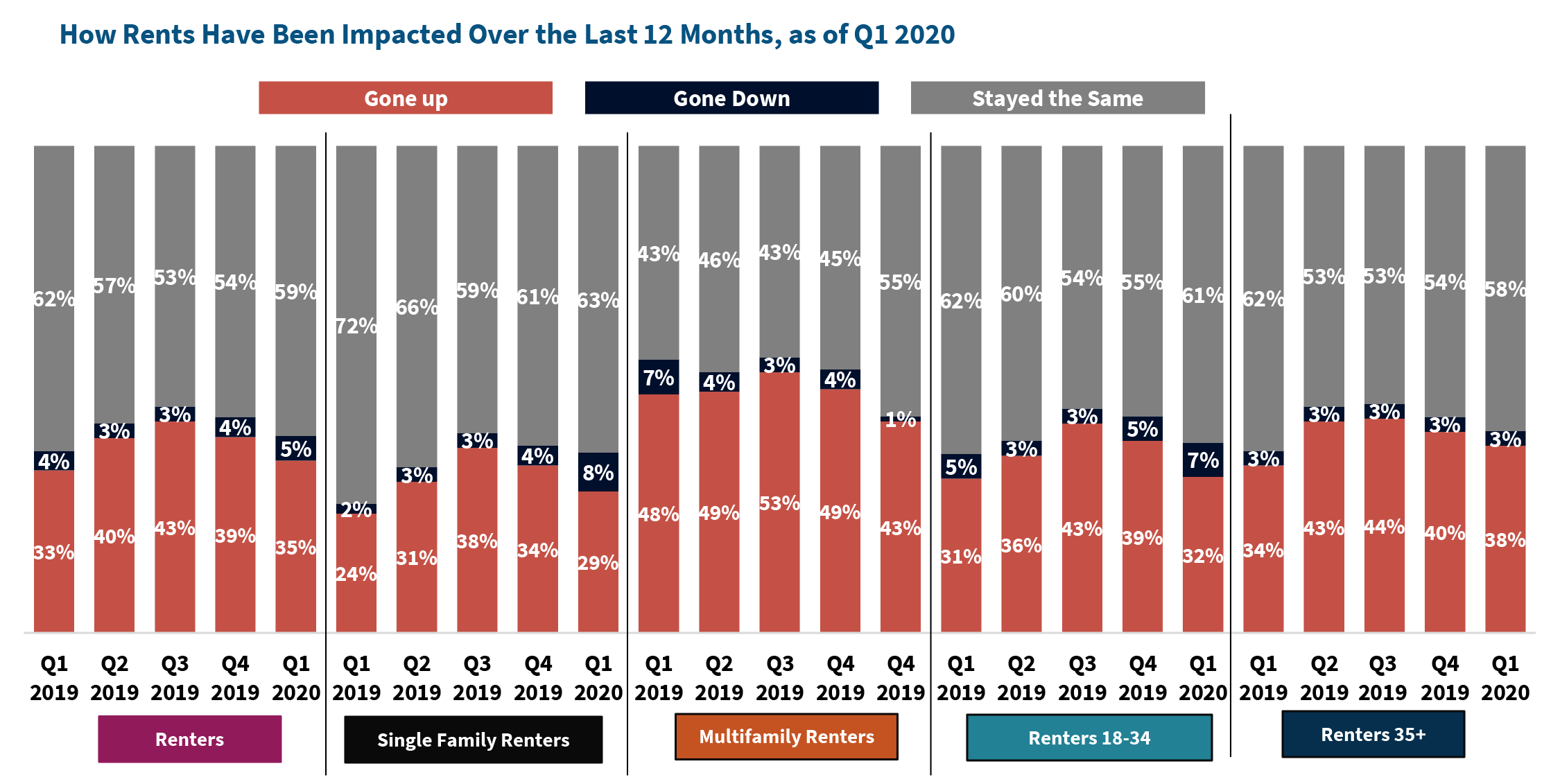 Not All Renters Experienced Rent Increases

They survey also asked about rent levels over the past year. Of the prime renter cohort, 61 percent stated that their rent levels had mostly stayed the same. However, nearly 32 percent said their rent had increased. There are a myriad of reasons why rents can change over a given year, including local supply and demand drivers.

However, for those respondents whose rent level stayed the same, the result might be attributable to lease renewal timing. Historically, renters prefer not to move during the colder months of the year (Q4 and Q1) and, as a result, they could be reporting similar rents over a 12-month timespan. In other words, their rent remained unchanged since it was not time to renew their lease.

Renting as a Path to Homeownership

Unsurprisingly, another key finding is that there are a number of reasons why people rent, and they are not all due to financial constraints. For example, the primary reason among the prime renting cohort is that they’re preparing their finances to one day own the home they desire (and not necessarily that they can’t afford any home) – and renting allows them greater flexibility to do so.

Other Reasons for Renting

According to the survey, approximately 29 percent of prime renter cohort respondents said that they were preparing for eventual homeownership but had no definitive timeline in mind. Furthermore, approximately 23 percent of the same respondents indicated that renting is simply the more affordable option at this point in their lives. This response makes sense, since there are a number of metro areas across the country that have attracted new prime renter cohort-aged residents over the past decade, but local housing prices remain out of reach for many of them. These metros include some of the nation’s most expensive locations, including New York City, San Francisco, San Jose, and Seattle. And it is not just in these expensive, more coastal metros.

According to the National Association of Realtors, since 2017 single-family home prices have increased by approximately 10.4 percent ($248,800 in 2017 compared to $274,600 in 2019). It’s unsurprising that rising home prices would make renting far more attractive for those who aspire to own someday as they continue to save to buy a home.

The survey also found that renter respondents had some obstacles that explained why some of them may be renting indefinitely, even though they aspire to own a home. Forty-four percent of the prime renter cohort respondents felt that the biggest obstacle to homeownership was having enough money available for either a downpayment or closing costs. Furthermore, approximately 50 percent of the prime renter cohort respondents feel as if they do not have the necessary credit score or credit history to obtain a mortgage.

Homeownership is Still the Dream

The Millennial generation is currently the most populous age cohort; however, as Millennials age, their housing desires are expected to change. The new emerging adult-age cohort, Gen-Z, may have different housing needs and desires from Millennials. It will be interesting to see how Gen-Z shapes the future of housing – both rental and owned – as they compete with Millennials for housing over the coming decades.

Opinions, analyses, estimates, forecasts, and other views of Fannie Mae’s Multifamily Economics and Research Group (MRG) included in these materials should not be construed as indicating Fannie Mae’s business prospects or expected results, are based on a number of assumptions, and are subject to change without notice. How this information affects Fannie Mae will depend on many factors. Although the MRG bases its opinions, analyses, estimates, forecasts, and other views on information it considers reliable, it does not guarantee that the information provided in these materials is accurate, current, or suitable for any particular purpose. Changes in the assumptions or the information underlying these views could produce materially different results. The analyses, opinions, estimates, forecasts, and other views published by the MRG represent the views of that group as of the date indicated and do not necessarily represent the views of Fannie Mae or its management.