Over the past decade, the Millennial population — usually defined as those born between 1980 and 1999 and numbering approximately 80 million — has largely come of age. As of 2015, 36 percent of people between the ages of 25 and 34 were college graduates, up from 24 percent in 1980.

Thanks to so many Millennials attending college, the student housing sector saw a significant increase in investment and new supply. However, the tide has been turning in terms of college enrollment.

Student housing sector fundamentals have been moderating as the industry comes to terms not only with declining enrollment, but also with the emergence of Generation Z (those born starting in the year 2000, of whom there are far fewer than Millennials), declining international student enrollments, and the increasing cost of tuition.

In addition, universities are starting to build more supply on campus, offering sophomores and upperclassmen more housing options than typical student housing developments, which are located off-campus. Developers are also changing the types of off-campus housing that they are constructing, as Gen Z students appear to be less interested in amenities and living in high-rise buildings. Furthermore, public/private partnerships are becoming more prevalent in the sector, offering local universities more customized options to meet demand.

Of these universities, the University of Florida is expected to receive the most new beds — approximately 2,800 beds — for the fall 2019 school year. 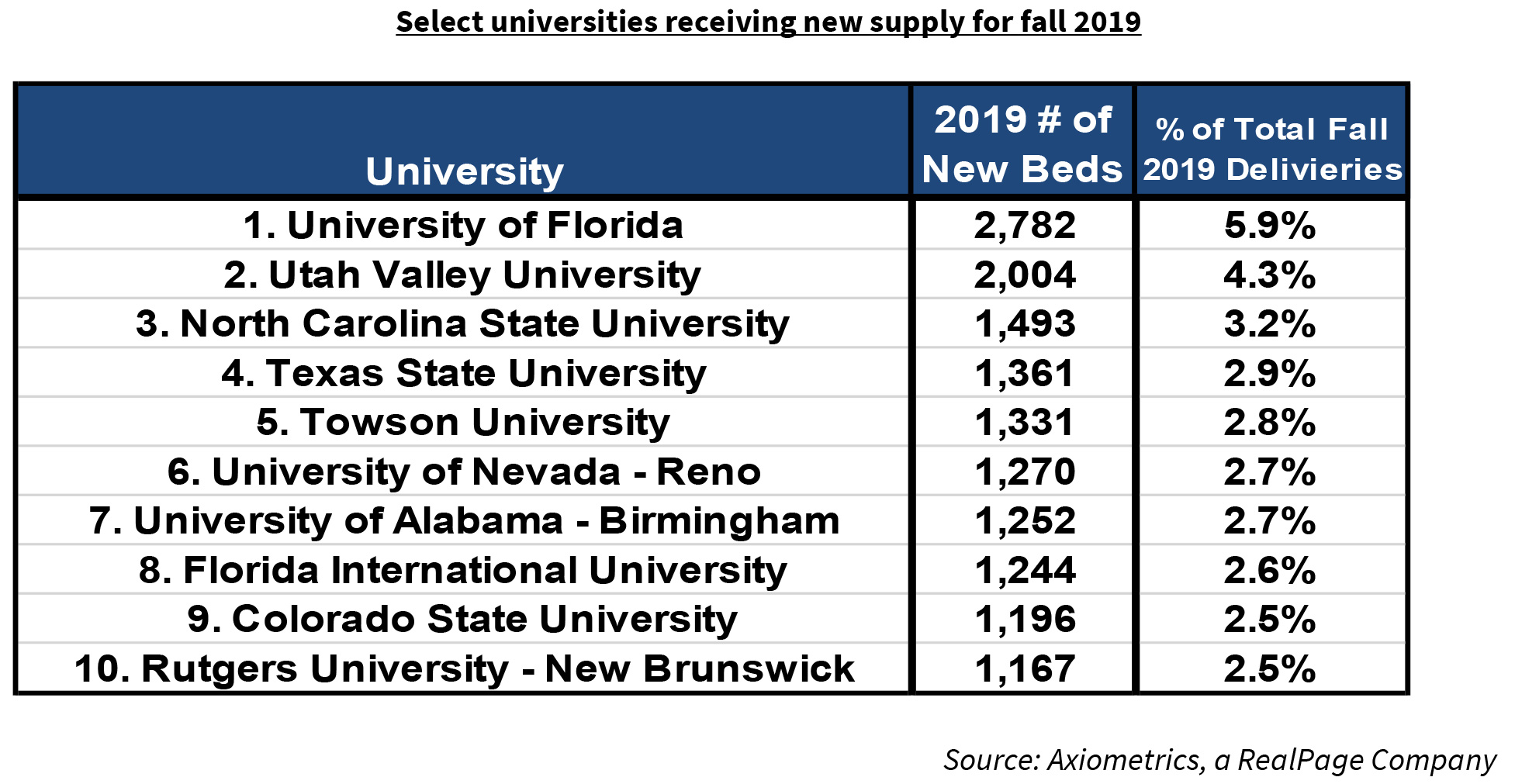 Even though the increase in supply is only moderate, we do not expect increased supply to be the trend going forward. A preliminary look at next year’s fall 2020 school year shows that supply will likely decrease. Currently, there are approximately 52,000 beds in the student housing construction pipeline scheduled to deliver in 2020, according to Axiometrics. However, until new projects are moved from the planning stage, it is uncertain when the projects will actually complete. 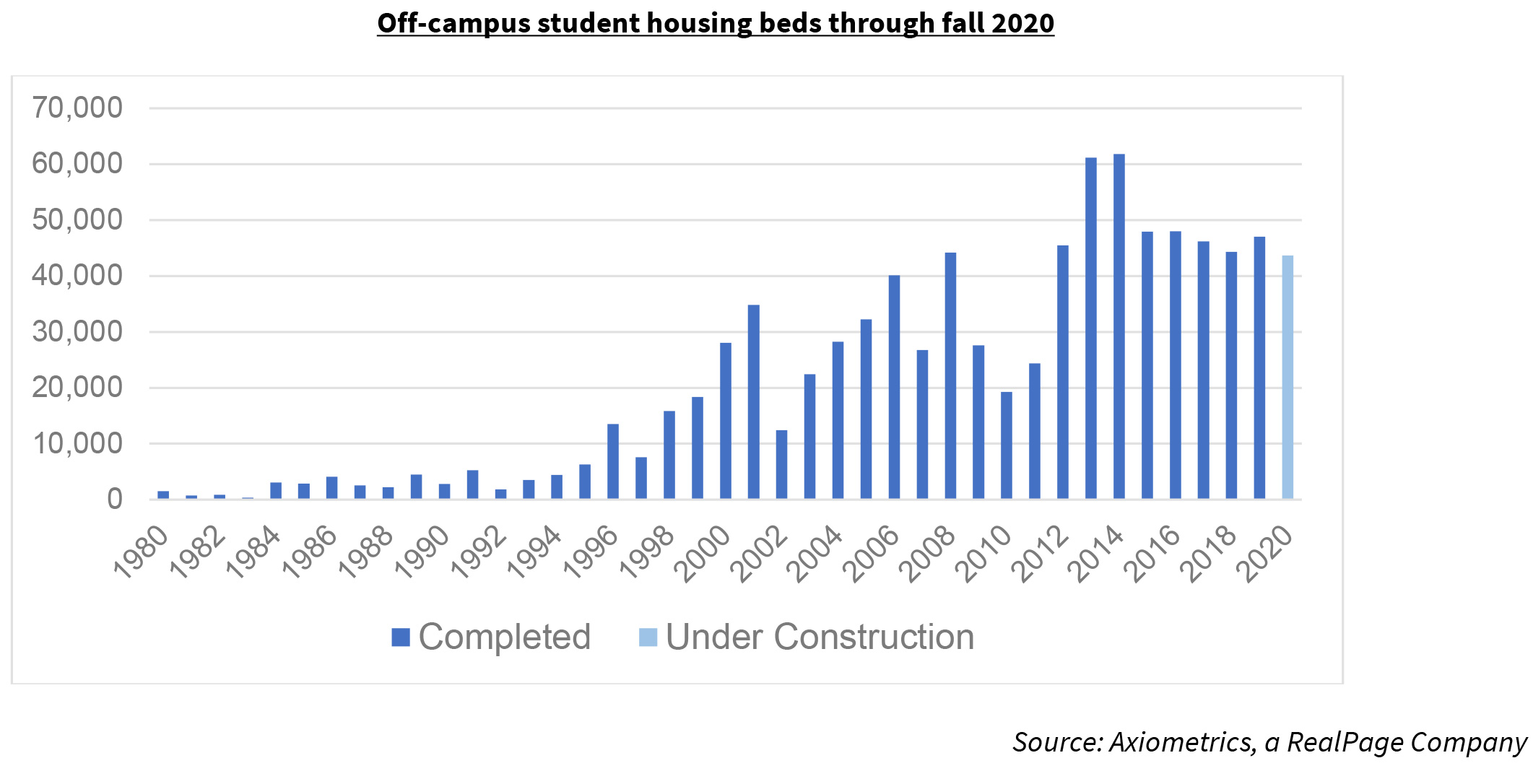 A recent trend has been the role of public/private partnerships, which allow local colleges and universities to partner with private developers to build new on-campus student housing developments, thereby replacing outdated dormitories. These partnerships are mutually beneficial to each party, as developers who normally build off-campus properties get to finally place their buildings on far more desirable on-campus locations. Furthermore, colleges and universities also tend to benefit from these partnerships, because they’re able to allocate funds to other areas of need, such as faculty, research, and athletics.

Of immediate concern to student housing investors and developers is the emergence of Gen Z. Unlike the previous generation, the Millennials, the population of Gen Z is much smaller.

According to the National Student Clearinghouse Research Center, as of this year, college enrollment has decreased for the seventh consecutive year. Decreasing enrollment is not new to the student housing sector; however, there is new significance now, since the first wave of Gen Z students are now freshmen in college.

Unlike their Millennial cohorts, Gen Z seem to be less interested in the high-end amenities that developers were building when Millennials were enrolling in college. Many developers are beginning to focus on the shifting needs and wants of this new generation. According to some developers, their research has found that Gen Z seem to prefer more garden-style properties with fewer amenities, whereas Millennials seemed to favor high rises with plenty of amenities, including pools and rooftop lounges. Developers believe that Gen Z students tend to prioritize proximity to campus over amenities as the best way to enhance their collegiate experience.

Since Gen Z is expected to be much smaller than the Millennial generation, declining college enrollments should be considered the new norm. Declining enrollments could cause developers in the industry to change their approach when it comes to new construction and the maintenance of existing stock. Gen Z enrollment in college is also declining due to an expanding economy offering more options to enter the workforce without a college degree, according to recent data from the National Center of Education Statistics.

Declining enrollment trends are probably the most responsible for the moderation of new supply in the student housing sector. However, it’s not just U.S. student enrollment that’s been on the wane. Declining enrollment from international students has been an increasing trend. Considering the revenue uncertainty amid declining enrollment, some colleges and universities could be forced to shut down.

International student enrollment has declined overall for the fourth consecutive school year. Many schools rely on wealthy international students, but that revenue is becoming less reliable as fewer students are enrolling in U.S. colleges and universities.

According to the Institute of International Education, as of 2018, international student enrollment from South Korea, Saudi Arabia, and Canada has contracted, as seen in the adjacent chart. Furthermore, in the United States, according to an October 21, 2019, Washington Post article, Carleton College economist Nathan Grawe predicts that 2026 will be the year in which declining enrollments will exacerbate. Dr. Grawe expects that four-year collegiate enrollment will decline by nearly 280,000 students per class. This prediction is not welcome news for the student housing sector, especially at those colleges and universities that may be relying on wealthy students to stay in business.

The student housing sector continues to see a steady amount of new annual supply. Deliveries have decreased annually for the past few years, but there was a slight uptick in supply for the fall 2019 school year. The steady performance of the sector has allowed for new trends to emerge, some which should help keep fundamentals somewhat stable over the short- term.

Gen Z has emerged, and they are not as populous as the Millennial cohort. The industry will also have to face ongoing declining enrollment and the emergence of a new generation of students whose preferences are likely to differ from preceding generations. Declining international student enrollment and rising tuition costs are also headwinds facing the sector. However, it is not all doom and gloom. Student housing has only recently started to mature as an asset class for investors. Despite the new reality the sector is facing, there is no reason to believe that the sector cannot once again reinvent itself and find new ways to adjust to a new generation and a new normal.